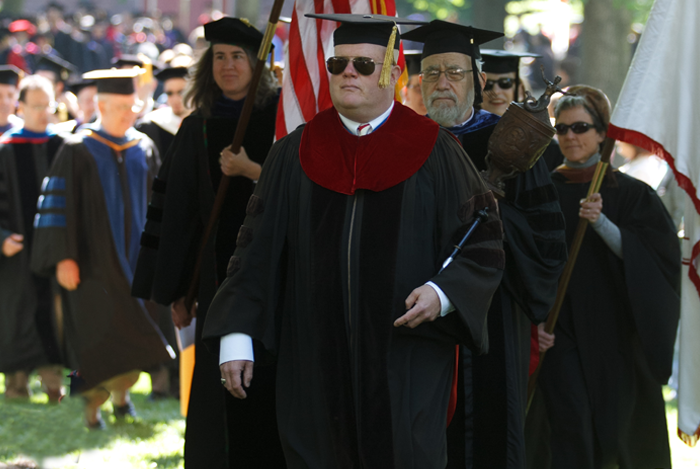 Dickinson's faculty members are recognized in a variety of ways for going above and beyond both in and out of the classroom.

The Dickinson Award for Distinguished Teaching

The Dickinson Award for Distinguished Teaching was instituted in 1993-94 to replace the Christian R. and Mary F. Lindback Foundation Award which had been given every year since 1960. The award winner receives a cash honorarium as well as a citation prepared and read by the dean of the college at the last faculty meeting of the year. It is the highest honor the college bestows on a member of the faculty for excellence in teaching. The recipient is selected by the president from a list of nominees provided by former recipients. Previous winners of this award (and the Lindback) are so identified in the faculty profiles list.

The Ganoe Award for Inspirational Teaching

The Constance and Rose Ganoe Memorial Fund established in 1969 through a bequest of the late William A. Ganoe of the Class of 1902 provides that an award be given annually to a professor at the college selected by the members of the senior class immediately prior to their graduation through a secret balloting process.

The award winner receives a cash honorarium plus the opportunity to use funds accumulating as a result of the endowment to purchase books for the library or educational equipment for departmental or collegewide purposes.

The college has a number of endowed chairs. The holders of these chairs are elected by the Board of Trustees, and the chairs that they hold are indicated in the faculty profiles list.

The Theodore & Catherine Mathias Chair in Mathematics, Computer Science and Quantitative Studies was endowed in 1991 by R. Lee Holz, class of 1957.

The A. Lee Fritschler Chair of Public Policy was established in recognition of President Fritschler’s 12 years of service as chief administrator and teacher at the college. The endowment was made possible through the generosity of members of the Board of Trustees and friends of the college.

The Christopher Roberts Professorship in Archaeology was established in 2000 through the generosity of the John J. Roberts Family and named in honor of Mr. Christopher Roberts, class of 1975. This endowed professorship will support the interdisciplinary major in archaeology and link classical studies, anthropology, art & art history and other departments which offer a range of courses relating to the ancient world.

The John R. Stafford ’59 and Inge Paul Stafford ’58 Chair in Bioinformatics, endowed in 2001, is awarded to a distinguished member of the Dickinson faculty who teaches in the college’s Biochemistry and Molecular Biology program-an interdisciplinary program designed to reflect and respond to rapid advances in science and technology.

The John J. Curley ’60 and Ann Conser Curley ’63 Faculty Chair was established in 2002 by John and Ann Curley, both alumni of the college, in honor of several Dickinson faculty members who were their former mentors and teachers, to be awarded to a faculty member in one of the departments of the honorees in celebration of faculty excellence.

The Tamar and Emil R. Weiss ’53 Chair in Art and Art History was established in 2002 to support a distinguished member of the faculty who teaches in the college’s Art and Art History program. The creation of this chair honors the Weiss family’s long-standing appreciation for and commitment to the arts and Dickinson College.

The John J. Curley ’60 and Ann Conser Curley ’63 Faculty Chair in International Studies, Business and Management was established in 2003 by Chairman of the Board of Trustees, John Curley and his wife, Ann, to recognize a distinguished member of the faculty in the fields of International Studies, Business, and Management for his or her teaching, scholarship and contribution to the intellectual life of the college.

The John J. Curley ’60 and Ann Conser Curley ’63 Faculty Chair in Global Education was established in 2003 by Chairman of the Board of Trustees, John Curley and his wife, Ann, to honor a distinguished member of the faculty whose teaching and scholarship contributes to the college’s strategic efforts in Global Education .

The Benjamin Rush Distinguished Chair in Liberal Arts and Sciences was named for the founder of Dickinson College, Dr. Benjamin Rush, who, just days after the Treaty of Paris, founded Dickinson College for the purpose of educating engaged citizens and leaders who would endure the success of the new democracy.

The Walter E. Beach ’56 Chair in Political Science was established in 2007 from the estate of Walter Eggert Beach, a member of the Dickinson class of 1956 and of the college’s Board of Trustees. The chair is to be awarded to a distinguished member of the faculty whose field of expertise is political science. It recognizes Walter Beach’s lifelong affinity with Dickinson College and his distinguished career within the political science community.

The Walter E. Beach '56 Chair in Sustainability Studies was established with a gift from the estate of Walter Eggert Beach, a member of the Dickinson Class of 1956 and of the College’s Board of Trustees. The chair, first installed in January 2011, is to be awarded to a distinguished member of the faculty whose teaching and research combines the specialty of the chair holder’s discipline with interdisciplinary interests in sustainability. It recognizes Walter Beach's lifelong affinity with Dickinson College and his enduring commitment to advancing his college.

The Distinguished Chair in Africana Studies was established on January 20, 2009 by an alumni donor who chooses to remain anonymous. The donor stipulated that the announcement of creation of an endowed chair in Africana Studies should coincide with the day that our nation inaugurated its first African-American president, just one day after Martin Luther King Day.

The Carol Jones Saunders ’62 Directorship of the Toulouse Center was established in 2011 to support the faculty directorship of the Dickinson-in-France program. This gift celebrates the importance of the study of language and Mrs. Saunders’s affection for the culture and history of France.

The college has a number of named chairs. The chairs that faculty members hold are indicated in the faculty profiles list.

The Martha Porter Sellers Chair of Rhetoric and the English Language is an endowed professorship established in 1936 by a gift of her son, Prof. Montgomery Porter Sellers, of the class of 1893.

The Thomas Bowman Chair of Religion and Philosophy was endowed in 1949 by the gift of the Kresge Foundation (Sebastian S. Kresge, L.H.D., Founder), and named for Thomas Bowman of the class of 1837, the first graduate of Dickinson College to be elected a Bishop of the Methodist Episcopal Church.

The Joseph Priestley Chair of Natural Philosophy was established in 1959 by the gifts of William H. Baker and S. Walter Stauffer in memory of Salome Baker Stauffer.

The William W. Edel Chair in the Humanities was endowed in 1959 by the gift of Merle W. Allen, a college trustee, and his wife, Elizabeth Frederick Allen, “in recognition and commemoration of Dr. Edel’s outstanding leadership as president of the college from 1946-1959.”

The Russell I. Thompson Chair of the Dean of the College was established in 1967 by the gift of Ethel Wright Thompson.

The John B. Parsons Chair in Liberal Arts and Sciences was established in 1976 by a gift from the estate of Mrs. Katharine F. Parsons.

The General Omar N. Bradley Chair in Strategic Leadership was established in 2001 as a joint position with the United States Army War College in Carlisle and Dickinson College, for the purpose of solidifying the relationship between the two institutions to promote the exploration of leadership issues and military-civilian interaction. Participants are involved in activities at both institutions and throughout the Carlisle area. The position involves teaching a course mutually agreed upon by the two institutions. Recipients of this appointment are as follows: