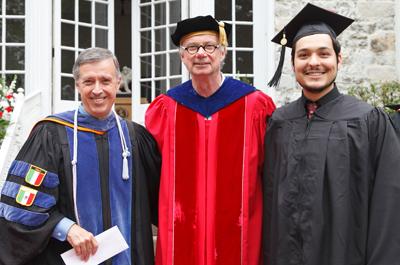 J. Mark Ruhl, professor of political science and the Glenn and Mary Todd Chair of Political Science, received the Constance and Rose Ganoe Memorial Award for Inspirational Teaching during Commencement on May 19.

Established in 1969 with a bequest from the late William A. Ganoe, class of 1902, the award is given annually to a Dickinson faculty member elected by the senior class through secret balloting. The award includes an honorarium and the opportunity to use funds from the Ganoe Memorial Fund to support teaching and research interests.

"I am very pleased to win the Ganoe Award and extend my thanks to the class of 2013," said Ruhl. "I enjoy working with students inside and outside the classroom. I especially like helping students make the most of their study-abroad experiences."

Ruhl began his teaching career at Dickinson in 1975. His comparative politics courses cover Latin America and Sub-Saharan Africa. His research focuses on Latin American democratization and civil-military relations in the Central American countries of Honduras, Guatemala and Nicaragua. He is widely published on the topic and has lectured extensively in the U.S. and abroad.

Ruhl is a three-time coordinator of Dickinson's Latin American studies program and served two terms as chair of the political-science department. He directed the Dickinson Center in Bologna four times from 1977 to 2008 and helped develop the new Dickinson in South America program, which involves study in Ecuador and Argentina. "His courses are at the heart of Dickinson's commitment to global education," said class of 2013 President Hector Antonio Meza.

An alumnus of Dickinson, class of 1970, Ruhl holds a master's degree and Ph.D. from Syracuse University.