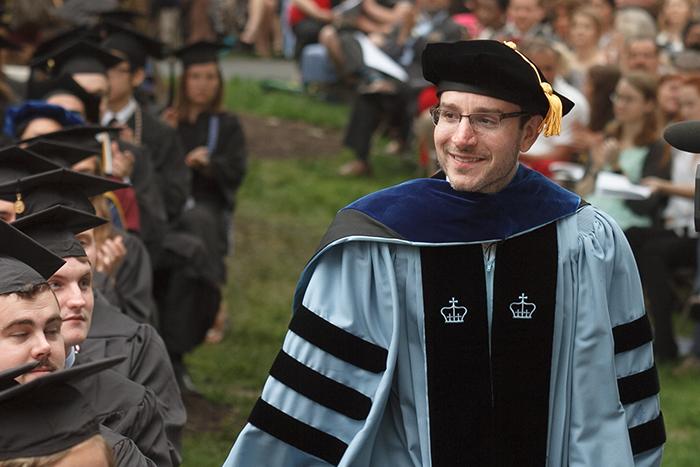 David O'Connell makes his way to the Commencement stage to accept the Ganoe award. Photo by Carl Socolow '77.

David O’Connell, assistant professor of political science, has been named the 2018 recipient of Dickinson’s Constance & Rose Ganoe Memorial Award for Inspirational Teaching. He accepted the award at Commencement on Sunday, May 20.

Voted on annually by graduating seniors and announced by the graduating class president during Commencement, the Ganoe award is the only student-bestowed faculty accolade at Dickinson. The award was established in 1969 with a bequest from the late William A. Ganoe, class of 1902.

"For me, what made receiving the Ganoe award so meaningful is the fact that it's the students who select the winner, and in particular it's the students who made up a special senior class that has enriched my life in countless ways,” said O’Connell. “It was humbling and overwhelming to receive an award from a collection of young people I admire so much."

O’Connell joined Dickinson’s political science department in 2013. His major research interests are the presidency, the role of religion in American politics and American political development. A well-respected writer and commentator, he has penned op-ed pieces for CNBC, The Hill and The Washington Times. Media outlets including Variety, The Christian Science Monitor and the Associated Press have sought his expertise.

O’Connell is the author of 2014’s God Wills It: Presidents and the Political Use of Religion. He also is active in the campus community and is known for his energetic lectures where he encourages students to engage respectfully and thoughtfully across political differences.

A native of Connecticut, O’Connell earned his bachelor’s degree from the University of Pennsylvania. He earned two master’s degrees and his Ph.D. from Columbia University.

The Ganoe award winner receives a cash honorarium plus the opportunity to use funds to purchase books for the library or educational equipment for departmental or college-wide purposes.