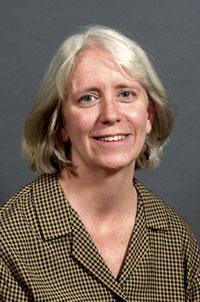 Regina Sweeney, associate professor of history, received the Distinguished Teaching Award during a pre-Commencement ceremony. Recognizing outstanding teaching, the award is the highest honor given to a Dickinson faculty member. Sweeney also received a cash honorarium.

“Receiving the award was a wonderful surprise and I am touched by the recognition of my colleagues,” said Sweeney. “I love teaching at Dickinson.”

Sweeney came to Dickinson in 2001. She teaches early-modern and modern-European history, including courses on World War I, European empires and the history of the body and sexuality.

Beyond the classroom, Sweeney represents the Dickinson faculty on committees that address campus information technology and the complex issues of sexual misconduct. She also has served on the President’s Commission for Women, which ensures and promotes Dickinson’s commitment to gender equity in the classroom, on campus and in the broader community.

Sweeney’s book, Singing Our Way to Victory, won first prize from the International Society for the Study of Popular Music and a Choice Award of Excellence. She holds a bachelor’s degree from Tufts University and a master’s and doctorate from the University of California-Berkeley.