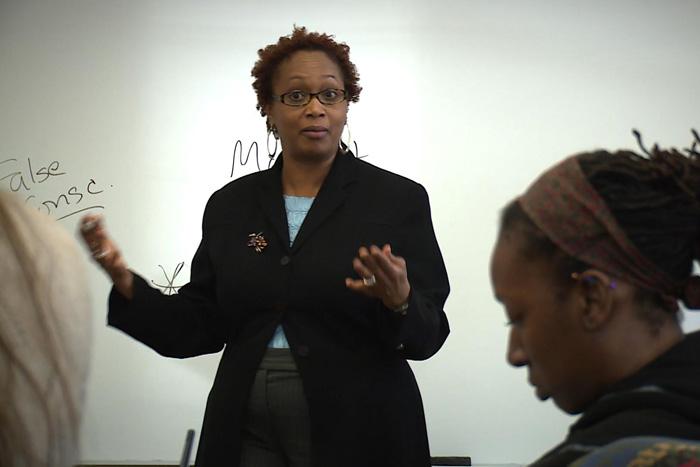 Jerry Philogene, associate professor of American studies, is the 2014-15 recipient of the Distinguished Teaching Award, the highest honor given to a Dickinson faculty member. Recognizing excellence in teaching, the annual award is determined by faculty vote, with approval from the president of the college.

Philogene, who teaches courses in American studies, Africana studies and women's & gender studies, joined the college in 2005 with a B.A. from New School University and M.A. from New York University (NYU); she earned her Ph.D. in American studies from NYU in 2009. She specializes in 20th-century African American and Afro-Caribbean visual arts and cultural history, and her research interests explore the intersections of race, ethnicity, class and gender in contemporary visual arts and culture.

Speaking during a pre-Commencement ceremony, Neil Weissman, provost and dean of the college, described the mix of mastery and personal warmth that earned Philogene the award, which marks its 55th anniversary this year.

“The subject matter is complex, with strong emphasis on theory and close reading of primary texts, and, to hear their testimony, students in our awardee's classes are hard-pressed to do their best,” said Weissman, noting that, as one student described it, Philogene created a “very challenging atmosphere ... that pushed the envelope and made [us] really think,” an atmosphere in which unsubstantiated comments and one-word answers cannot survive.

“Yet parallel to this narrative of rigor and theoretical heft runs moving testimony of spirit,” Weissman continued, noting that, when describing their in-class experience with Philogene, students invariably also describe an atmosphere of encouragement, passion and joy, and a space where they feel comfortable navigating multiple avenues of thought in high-stakes conversations about race, class and gender.

And that positive energy is not limited to students, added Weissman, who describes the professor as one “who always lights up when she sees you who, in her omnipresent enthusiasm, has aptly been characterized as ‘the exclamation point incarnate.’ ”