‘You Have to Fight for What You Love’ 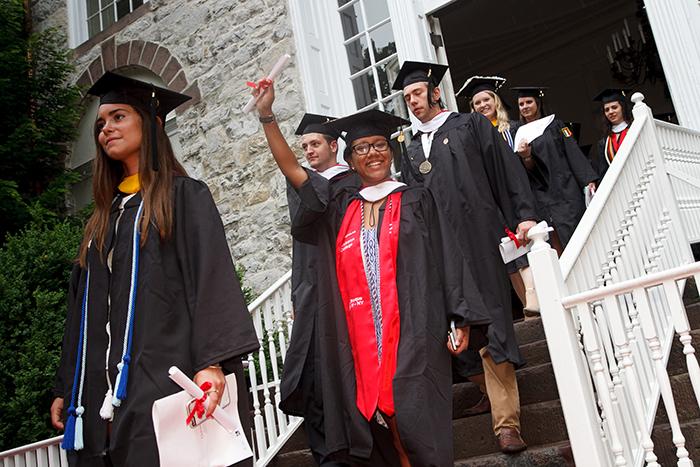 Five-hundred and sixty-two Dickinsonians from 31 states and 15 foreign countries transitioned from students to alumni during a Commencement ceremony that included two impassioned calls to action, a high-profile award and the bestowing of four honorary degrees. And while spring rain and threatening thunderstorms forced the ceremony indoors, it did not prevent the class of 2015 from taking that time-honored walk down the steps of Old West.

Nancy A. Roseman, president of the college and professor of biology, opened the ceremony with a new tradition, as she recognized five faculty members who are retiring this year. “Together, [Jeff Niemitz, Thomas Reed, James “Andy” Skelton, Candie Wilderman and Sylvie Davidson] have taught at Dickinson for a total of 187 years,” said Roseman, “and they left their mark through their contributions in the classroom and by mentoring generations of students.”

The inductees of Phi Beta Kappa were recognized by chapter secretary and Associate Director of Admissions Tara Vasold Fischer ’02, and President Roseman bestowed additional honors on four members of the class of 2015:

Muirhead, who participated in many student-leadership roles at Dickinson, also was announced as the 2015 Young Alumni Trustee, an honor that carries with it a two-year term on the college’s Board of Trustees.

The Sam Rose ’58 and Julie Walters Prize at Dickinson College for Global Environmental Activism was presented to actor/environmental activist Mark Ruffalo. The award recognizes Ruffalo for his work promoting sustainability, as co-founder of Water Defense, an advocacy group that works to create better access to clean water by testing water supplies and documenting contamination.

“I’m really grateful and honored to be here today,” Ruffalo said, adding that he will donate the $100,000 prize to Water Defense, and accepts it on behalf of all of the organization’s staff, “and I’m here to tell you that ‘activist’ is not a dirty word … you have to fight for what you love ... You are facing a lot of [challenges], and I am happy to say that your generation is well armed to take them on.”

William Wallace ’74, an art-history professor and internationally recognized expert on Michelangelo, was presented with an honorary doctor of fine arts degree, and Ann Conser Curley ’63—a journalist and former president of Dickinson’s Alumni Council who co-established three chairs at Dickinson, along with husband John Curley ’60—was awarded an honorary doctor of liberal arts degree.

The college awarded a posthumous honorary doctor of philanthropy degree to John “Jack” Stafford ’59, who, along with wife Inge Paul Stafford ’58, also made possible many scholarships and additions to the college—most recently, the Dr. Inge P. Stafford Greenhouse for Teaching and Research, dedicated in 2013. Jack’s four daughters accepted the award on his behalf.

Ian McEwan, the award-winning author of more than 20 novels and short stories, including Atonement (2002), was awarded an honorary doctor of letters degree, and he delivered the Commencement Address.

McEwan, who first visited Dickinson in 2005 through the Harold and Ethel L. Stellfox Visiting Scholars and Writers Program, spoke about the need to preserve and promote free expression in the wake of recent global events, such as the January attacks on the offices of the French satirical newspaper Charlie Hebdo.

“Freedom of expression sustains all of the other freedoms we enjoy,” he said, invoking George Washington, who wrote that without free speech, we are led, “dumb and silent” to the slaughter. “I hope you'll use your fine liberal-arts education to preserve for future generations the beautiful and precious—but also awkward, sometimes inconvenient and even offensive—culture of freedom of expression we have.”

Then came the moments the 562 members of the class of 2015 had long been waiting for—the conferring of degrees. After the graduates were recognized, the class processed from the Kline to Old West, so they could walk down its storied stone steps—a tradition that mirrors their ascent of those steps when they were officially signed in to the college, nearly four years ago.