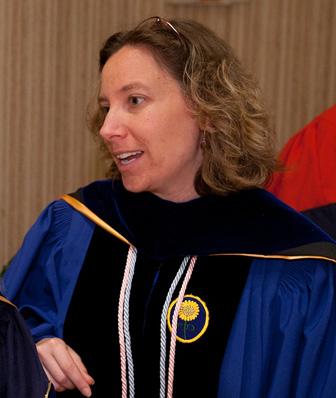 Amy L. Wlodarski, associate professor of music at Dickinson College, received the Distinguished Teaching Award during pre-Commencement ceremonies held recently. The award, which recognizes outstanding teaching, is the highest honor given to a Dickinson faculty member.

The award is determined by faculty voting and then approved by the Dickinson’s president; the recipient also receives a cash honorarium. The citation naming Wlodarski as this year’s winner noted that while the award is faculty determined, students also sing her praises. They repeatedly identify Wlodarski as “the best” they have encountered. Students laud her lectures as “insightful and passionately delivered” and praise her class discussions and imaginative assignments. As one student put it, she expects and gets “200 percent” from students–prompting them “to reach farther than they realize they can go.”

According to her award citation, the concept of “reach” perhaps best characterizes Wlodarski. Dickinson expects much from its faculty, and she touches all the bases: assisting with admissions, actively advising, caring for the library collection and helping place students in such graduate programs as Princeton University and the University of California at Los Angeles. Her area of expertise covers centuries, the globe and a multiplicity of cultures. She enthusiastically moves outside of her comfort zone and training on Europe to add Middle Eastern and African dimensions to offerings in ethnomusicology. To illustrate, she brought Mississippi blues and South African repertories to the Black Liberation Mosaic she developed with her colleagues in history, Jeremy Ball and Kim Rogers.

While Wlodarski teaches music history courses, she also conducts the Dickinson College Choir. Her current research explores the relationship between music, trauma, memory and politics, particularly music representing the Holocaust. Her publications focus on the manner in which composers have imagined the Holocaust in musical works ranging from Arnold Schoenberg to Steve Reich. In addition to written scholarship, Wlodarski has given pre-performance lectures with institutions such as the Los Angeles Opera, The Philadelphia Orchestra and the Harrisburg Symphony Orchestra.

In 2010, Wlodarski was named a co-recipient of the Oral History Association's Pedagogy and Teaching Award. Other accolades include the Office of Diversity Initiatives Outstanding Female Faculty Award and nomination for the Student Senate Faculty Member of the Year Award.

Wlodarski holds a B.A. degree from Middlebury College and an M.A. and Ph.D. from Eastman School of Music.