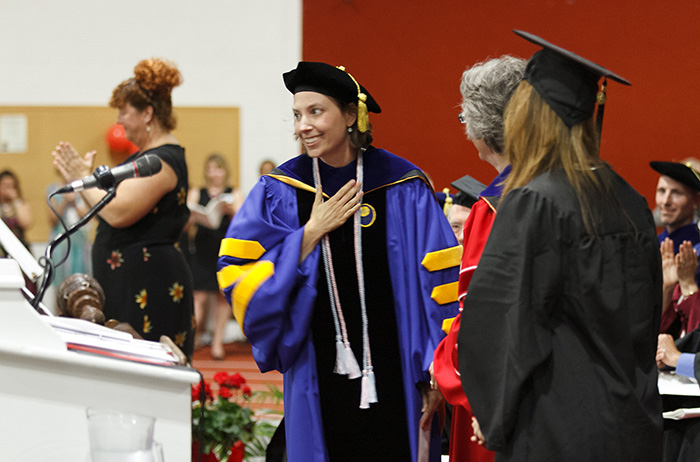 Wlodarski responds with surprise and gratitude to receiving the Ganoe Award for Inspirational Teaching during the 2015 Commencement ceremony. Photo by Carl Socolow '77.

Professor of Music Amy Wlodarski received a welcome surprise on May 17 when she was named the 2015 recipient of the Constance & Rose Ganoe Memorial Award for Inspirational Teaching.

Voted on annually by graduating seniors and announced by the graduating class president during Commencement, the Ganoe award is the only student-bestowed faculty award at Dickinson. It was established in 1969 with a bequest from the late William A. Ganoe, class of 1902, and includes an honorarium from the Ganoe Memorial Fund to support teaching and research interests. Recent winners include Russell Bova (2011), Daniel Cozort (2012) J. Mark Ruhl (2013) and Ian Andrew “Andy” MacDonald (2014).

A former Fulbright scholar who holds a B.A. from Middlebury College and an M.A. and Ph.D. from Eastman School of Music, Wlodarski teaches music-history courses at Dickinson and also directs the College Choir. Her current research focuses on the way music, trauma, memory and politics interact.

Since Wlodarski's arrival at Dickinson in 2005, the College Choir has grown from 12 to approximately 85 members, and has performed at benefits that have earned money for local homeless shelters; collaborated on internal scholarship initiatives; and joined forces with the Hershey Symphony Orchestra in a performance of Beethoven’s Ninth Symphony. This fall, the choir will premiere a new choral work in Arabic by composer Mohammed Fairouz. Wlodarski also brought Mississippi blues and South African repertories to the Black Liberation Mosaic she developed with history-department colleagues. She has given lectures for the Los Angeles Opera, the Philadelphia Orchestra and the Harrisburg Symphony Orchestra.

The Ganoe Award is the third Dickinson honor to be bestowed on Wlodarski, who garnered the 2011 Distinguished Teaching Award, presented annually by faculty in recognition of outstanding teaching and pedagogical contributions to the college, and the Office of Diversity Initiatives Outstanding Female Faculty Award. Wlodarski also is the 2012 recipient of the Irving Lowens Award (Society for American Music), was named a co-recipient of the 2010 Oral History Association's Pedagogy and Teaching Award, and was a finalist in NerdScholar’s second-annual list of “40 Under 40: Professors Who Inspire.”

According to her students, Wlodarski also shines as an advisor and mentor, both to those she teaches, and those in the student clubs she advises—Dickinson’s Phi Beta Kappa chapter and student a cappella group the D-Tones.

“She truly cares about her students’ well-being, and her door is always open for students to come and talk, whether it be about academics or otherwise,” said Holly Kelly ’15, a music major and choir member who took an independent study course with Wlodarski during her senior year.

“She also pushed me to a level that I didn't think I was capable of,” Christina Errico ’15, a former D-Tones president who took a First Year Seminar with Wlodarski and, at Wlodarski's urging, submitted a paper to the First Year Excellence in Writing contest—and won. “The experience of my First Year Seminar with her has shaped my career at Dickinson. Professor Wlodarski is, hands down, the best professor I have ever had.”