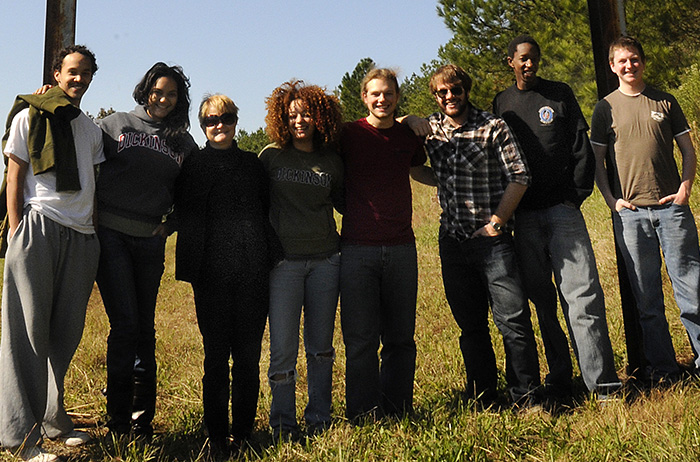 The Mosaic group in Coahoma County, Miss. The group traveled to Mississippi to conduct original research.

Dickinson students traveled to Coahoma County, Miss. to research American history—and became part of it in the process.

The students are part of the Comparative Black Liberation Mosaic, an intensive course that requires them to travel to King William’s Town, South Africa, and Coahoma County to research the anti-apartheid and Civil Rights movements.

As it happened, their Mississippi trip coincided with the November presidential election, and so the students found themselves in an important center of the Civil-Rights movement at the precise time that the first African-American was elected President of the United States.

It was a transformative educational moment.

“I think that all of us were crying at some point,” relates participating student Max Paschall ’11. “People were hugging us on the streets. There was such an outpouring of happiness. I’ve never felt that proud of America.”

“When they called the election we heard gunshots in the streets, and people blared their horns for an hour and a half. It was cacophonous,” adds Ryan Koons ‘10, who is researching the music of the Delta region as part of the course. “I think it was the most beautiful sound I have ever heard.”

But as significant as this juncture in contemporary history was, it was only part of a consistently enlightening, semesterlong cultural learning experience.

A walk through history

A six-month course that grants a full semester of credits, the Comparative Black Liberation Mosaic began in July 2008, when students traveled to King William's Town, South Africa. There they conducted approximately 40 interviews with leaders in the anti-apartheid movement, including Ntsiki Biko, widow of the slain anti-apartheid activist Steve Biko.

On returning to Dickinson, they attended related classes and created audio streams, podcasts and films to document their South African research. Next, they traveled to Coahoma County to speak with local Civil-Rights leaders and experience the Delta region’s unique music and culture.  It was there that history met the present.

“We worked through local community leaders to develop lists of narrators who could tell us about what life was like under segregation and how it was to be a part of the Civil-Rights movement,” explains Professor of History Kim Rogers, who teaches the course in conjunction with Jeremy Ball, assistant professor of history, and Amy Wlodarski, assistant professor of music. “It was an incredible opportunity.”

Intensifying this experience, the students immersed themselves in the local culture by staying with residents in rural Clarksdale, Miss., and its surrounding communities.

One of these local residents was Sister Kay Burton, a white Roman Catholic nun who hosted several students in her Jonestown, Mississippi home.

To learn Burton’s unique perspective on the area, Koons accompanied her on daily morning walks around the town. “She was the only white person in town, and the insight she gave about the underside of the community was just fascinating,” he says. “There is extremely desperate poverty, but there’s also a tradition of extreme community-building and community activism. I don’t think that would have been brought home to us if I hadn’t talked to her about it.”

The students also investigated the role of music in the Civil-Rights movement—both as a means of expression and as an engine of economic growth for African-Americans—by speaking with working musicians, visiting the Delta Blues Museum and B.B. King Museum, and stopping by famed blues clubs like Red’s and Ground Zero.

These field trips were particularly interesting to James Chapnick ’10, an avowed music lover who is researching the controversies surrounding the Mississippi state flag.

“There were some really cool jazz joints that were unlike anything I’d ever seen before. We were sitting a foot from the band, and there were trash bags along the ceiling to keep the water from leaking in,” Chapnick says. “It was pretty rough, but the live music was amazing. I hadn’t heard anything like it.”

Paschall recalls meeting Johnny Gillington, a 73-year-old blues musician and teacher who remembers the pre-integration Southern music scene. “There are generations of musicians who were influenced by him, and he’s seen a lot of change in the music over the years,” Paschall says. “We were very fortunate to have interviewed him.”

According to Koons, such interviews had an interesting effect.

“One of the main tenets of oral history is to give a voice to people who are normally voiceless, and a byproduct of this is that you can work with the community to help them better understand themselves. And I think that really happened,” he says. “Through our work, people got interested in themselves and their own stories.”

Those stories will be heard. To complete the mosaic course, the students must compare the stories they gathered in Mississippi with those from South Africa—analyzing the similarities and differences of these two important movements in contemporary history—and create multimedia projects to present their findings. They then share their insights with the South African and American communities by posting their multimedia projects online.

As they near the end of the course, the students say that they’ve gained a heightened sense of purpose, a refined sense of identity and a more sophisticated grasp of contemporary society.

“Some of the people we talked to remember the days before they were allowed to vote,” remarks Tiffany Mane ‘10. “You read about these things in the history books, but to be in a place where events actually happened, and to talk to the people who saw it—it brings the text to life.”

Kyle Coston ’09 agrees. “People had different experiences and impressions [of the Civil-Rights movement]. There are nuances, and there are different sides to every story,” he says. “My understanding of it, having been there, goes beyond what I could read in a book.”