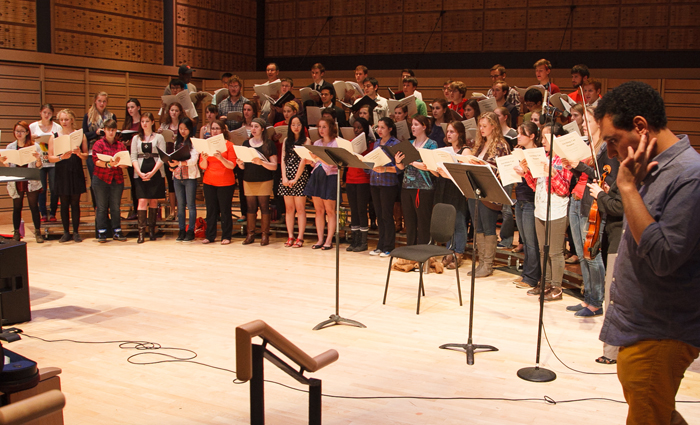 They performed Anything Can Happen, an epic oratorio that mingles three apocalyptic poems by Nobel Prize-winning Irish poet Seamus Heaney with text from the Injeel, the Arabic Gospel. Part intercultural conversation and part musical exploration, the piece is as original and globally minded as the composer who produced it—28-year-old Mohammed Fairouz.

Hailed by The New York Times as “an important new artistic voice” and by The New Yorker as “an expert in vocal writing,” Fairouz is one of the most widely performed and acclaimed composers of his generation.

A New Yorker of Arab-American heritage who is best known for works that tap Eastern and Western influences, Fairouz was awarded a national citation from the embassy of the United Arab Emirates for outstanding achievement in artistry and scholarship in 2008. He collaborated with several celebrated Arabic poets before collaborating with Heaney and has spoken and written extensively about the power of poetic language, most recently in the Huffington Post.

Fairouz visited campus in October to work with student-vocalistsas they prepared to perform his 2012 oratorio and to speak with students in an ethnomusicology class. “The benefits of getting direct instruction from a composer are boundless—it is an almost indispensable experience if you want to stay true to the piece,” said soprano Christina Errico ’15, who majors in archaeology and classical studies.

Tenor Frederick Schlick ‘14, who is applying to graduate programs in vocal performance, was inspired by Fairouz’s passion for language, while composition major Stephen Reale ’14, a recipient of the 2014 Weiss Prize for the Arts who is preparing to debut one of his own compositions, picked up valuable tips on how to focus and clearly communicate his artistic vision to the musicians who will realize it.

Soprano Amanda Boulware '14, who majors in psychology and music, said that the chance to get feedback from the composer was invaluable. “He had a way of interpreting his music in ways that I would not have, and it allowed me to make adjustments I would not have originally made,” Boulware said.

Political-science major Dana Lopatin '15 agreed, adding that that context “made the piece feel more personal. Afterward, I felt like our performance was not only technically better but also had more emotion and bite to it.” Alex Kasznel ’15, a music minor who majors in chemistry and biochemistry & molecular biology, described the composer’s approach to music “very thought-provoking,” and reported that he now is able to consider music in its cultural context, rather than “just assume everyone all over the world thinks of it in the same way I do.”

Fairouz noted that insights such as these are the fruits of the liberal-arts approach. “We had conversations ranging from the nature of my collaboration with Seamus to modern poetry to Arabic cultures; it became very much a cross-cultural conversation," explained the composer. “It was a real treat, because of the thoughtfulness with which the students approached the subject.”

That thoughtful approach was evident during the Nov. 24 performance. Planned last year in anticipation of Heaney’s scheduled visit to Dickinson in the spring, when he was slated to receive the 2013 Harold and Ethel L. Stellfox Award, the concert instead became a moving tribute to the poet, a longtime friend of Dickinson College, who died unexpectedly on Aug. 30 (his friend Paul Muldoon was later named this year’s Stellfox recipient).

“The students committed themselves to the work entirely and understood it thoroughly, both in terms of its musical and textual challenges,” said Amy Wlodarski, associate professor of music and director of the College Choir. “That we were able to share it with the community in light of Heaney's recent passing made it all the more meaningful. It was truly collaborative and transformative.”

“The students have worked very hard, and they really excelled,” added Fairouz, “and I think that’s because the students get a lot of attention in this smaller environment, and the faculty is devoted to shepherding them in exactly the right way. There was a real sense of investment.”