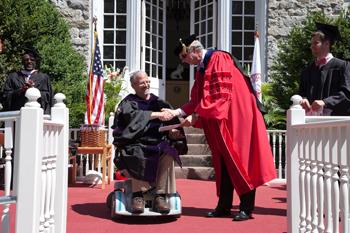 Established in 1969 with a bequest from the late William A. Ganoe, class of 1902, the award is given annually to a faculty member elected by the senior class through secret balloting. The award includes an honorarium and the opportunity to use the Ganoe Memorial Fund to support teaching and research interests.

“I always hope that by being introduced to new and different ways of thinking, students will, perhaps for the first time, really clarify their own beliefs and values,” says Cozort. “That, in turn, might help them to make better choices about how to live.”

In presenting the award to Cozort, class of 2012 president Teddy Wilhite said, “In addition to excellent teaching at Dickinson, he is an active scholar of Buddhist philosophy and the Tibetan esoteric tantric tradition.”

Cozort’s courses explore the rich traditions of non-Western faiths including Hinduism, Buddhism and the Native-American religions. He recently developed courses on the spiritual dimensions of healing and Buddhist views on the environment and sustainability.

Cozort began teaching at Dickinson in 1988 and was promoted to the tenured position of associate professor in 1995. He is a three-time chair of the religion department and has served as director of the Dickinson Humanities Program in Norwich, England, and the South India term-abroad program in Madurai, India.

His studies of Buddhist philosophy and esoteric practice with Tibetan lamas have resulted in six books. He also has written numerous chapters in collections and produced the documentary film, Mandala: The Sacred Circle of Vajrabhairava. He is editor of the Journal of Buddhist Ethics.

Cozort is the recipient of numerous fellowships and grants from the National Endowment for the Humanities and Pennsylvania Council on the Arts. He is a member of the Association for Asian Studies, the American Academy of Religion and the Namgyal Monastery Institute of Buddhist Studies.

Cozort received his bachelor’s degree from Brown University and his master’s degree and doctorate from the University of Virginia.