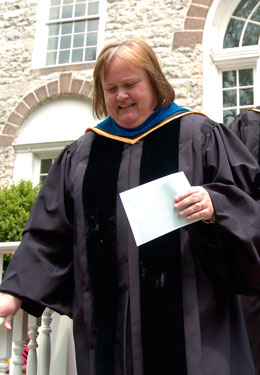 Teresa A. Barber, professor of psychology at Dickinson College, has received the 2007-08 Dickinson Award for Distinguished Teaching. The award, based on a vote by faculty, is the second major honor in a year for Barber. Last year, she shared the Constance and Rose Ganoe Memorial Award for Inspirational Teaching with Jeffery W. Niemitz, professor of geology.

"I'm truly honored by these two awards," Barber said. "When students think you're a great teacher, you know you've managed to make a very difficult subject matter, such as neuroscience, accessible and fun to learn. Teaching and engaging students in research are an enjoyable way to spend each day, and I'm thrilled to be recognized for a job well done. For me, the Dickinson Award for Distinguished Teaching means that I've achieved the highest standards of teaching we all strive for here at Dickinson."

Barber joined Dickinson in 1993 as an assistant professor in psychology and was named chair of the department from 2004-07. She is a behavioral neuroscientist, teaching classes that examine the relationship between the nervous system and behavior, including neuropsychology, the study of damaged brains and impaired behavior. Her research focuses on the biological changes induced in the nervous system by learning.

Barber, who earned a Ph.D and master’s degree from the University of California, Berkeley, is particularly interested in how the brain stores memories in relation to pathological states of memory storage, such as Alzheimer's disease. She earned a bachelor’s degree in psychology from California State University in Fresno, Ca.

Dickinson College is a national private liberal arts college of 2,400 students located in south central Pennsylvania, and is known for its innovative curriculum and international education programs. In September 1783 Dickinson became the first college officially chartered in the newly recognized nation.