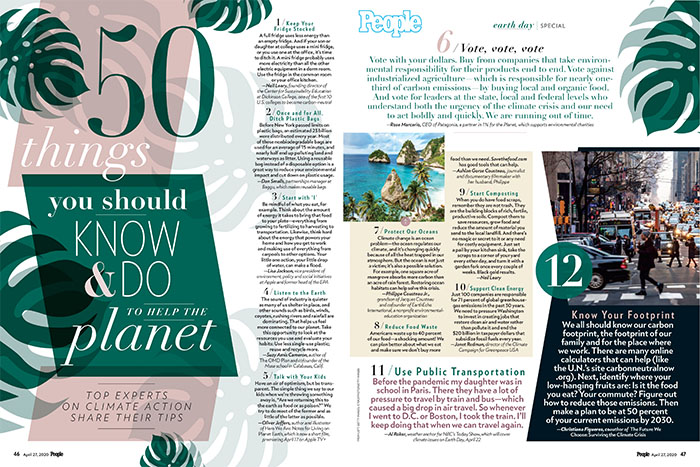 Dickinson faculty and administrators offered their expertise in various areas related to the COVID-19 pandemic, from research on risk to voting by mail to community resilience. And Dickinson once again made headlines for its commitment to sustainability as news of our carbon-neutrality achievement spread and our experts contributed to an Earth Day feature in People magazine.

Professor of History David Commins discussed the effects Saudi Arabia’s financial crisis will have on the crown prince for a story in U.S. News & World Report.

After its publication in a scholarly journal, research on pesticidecoated seeds by Assistant Professor of Environmental Studies Maggie Douglas was cited by several news outlets, including Modern Farmer.

Professor of Mathematics Dick Forrester’s paper “Computational Comparison of Exact Solution Methods for 0-1 Quadratic Programs: Recommendations for Practitioners” was published in the Journal of Applied Mathematics. This paper was co-authored with Noah Hunt-Isaak ’20, who worked on the project with Forrester during a student-faculty summer research project in 2018. The paper outlines a large-scale computational study to determine the best strategies for solving 0-1 quadratic programs, which can be used to model everything from predicting epileptic seizures to wildfire management. Forrester proudly notes that this is his fourth publication co-authored with a Dickinson student!

Professor of Psychology Marie Helweg-Larsen’s op-ed, “In battling the coronavirus, will ‘optimistic bias’ be our undoing?” was published by The Conversation. It was republished by several other outlets, including MarketWatch. Helweg-Larsen was interviewed by Wisconsin Public Radio about her research on optimistic bias and how it applies to how people view their risk of contracting COVID-19. She also was a live guest on WITF’s Smart Talk discussing the topic.

Assistant Professor of English Sheela Jane Menon authored “Time to Embrace, Not Shun, Malaysia’s Migrant Community,” which was published in The Diplomat.

Associate Professor of Political Science Sarah Niebler discussed a potential vote-by-mail Pennsylvania primary, and if such a measure would advantage one party over the other, for a story published in The Philadelphia Inquirer. Niebler also discussed vote-by-mail live on WWLAM/FM First News (New Orleans) and on Fox43 news.

Associate Professor of German Antje Pfannkuchen was awarded the prestigious Frederick Burkhardt Residential Fellowship at Johns Hopkins University. Sponsored by the American Council of Learned Societies, Burkhardt Fellows are recently tenured academics who each receive a $95,000 stipend and a $7,500 research budget to support large-scale, multiyear humanities and social-sciences research projects.

Steve Riccio, lecturer in international business & management, published “How to Keep Your Eyes on the Future When There’s a Crisis in the Present” in Academic Impressions.

Dickinson donated a UV-C light from its science labs to local EMS so they can use the equipment to disinfect face masks worn by first responders. Visiting Instructor in Environmental Studies Kim Van Fleet was interviewed by Fox43 to discuss how the UV-C light works.

Associate Professor of Music Amy Wlodarski was featured in The Chronicle of Higher Education story “Urban Gardens and Princess Leia: How Professors Got Creative in Teaching from Home,” which highlighted examples of adaptive teaching during the pandemic.

Associate Professor of Political Science and International Studies Andy Wolff is the fall 2020 recipient of the Fulbright NATO Security Studies award to Belgium. Wolff’s project, Complex Security Governance in Europe, investigates how European security is managed in a complex and multilevel governance environment. Another facet of the Fulbright award will have Wolff teaching a graduate course at the College of Europe in Bruges, Belgium.

Vice President for Enrollment Management and Dean of Admissions Catherine McDonald Davenport ’87 was featured in a webinar series, Inside College Admission, hosted by SCOIR.

The Sentinel reported on the College Farm’s production during the pandemic and its donation of surplus produce to Project SHARE. College Farm Director Jenn Halpin was interviewed.

Associate Vice President for Sustainability & Facilities Planning Ken Shultes ’89 was interviewed for a report that was published online and aired on WITF-FM about Dickinson’s partnership in a virtual power purchase agreement.

Provost Neil Weissman and CSE Director Neil Leary were among an elite group of top climate action leaders who contributed to People magazine’s special Earth Day anniversary issue. Leary provided three of 50 tips to help save the planet now. Among the other contributors were three recipients of Dickinson’s Rose-Walters Prize. Weissman and Leary also were quoted extensively in People’s story, “Earth Day 2020: What You Need to Know and Do to Save the Planet—Before It’s Too Late.”

Associate Provost and Executive Director of the Center for Advising, Internships & Lifelong Career Development Damon Yarnell was quoted in the article “Students, Don’t Give Up on Your Job Search Because of COVID-19,” published by the Society for Human Resource Management.

Dickinson’s announcement about achieving carbon neutrality was shared in a number of outlets, including Yahoo! Finance, Environmental Leader, StateImpact Pennsylvania and the AASHE Bulletin.

President Margee Ensign’s op-ed “Community resilience is facing its greatest threat, and colleges are helping” was published by PennLive. In the oped, Ensign argued that colleges should and can be at the epicenter of community response to COVID-19 and other challenges. The op-ed was highlighted by Inside Higher Ed in its coronavirus news roundup.

The Sentinel wrote about the Community Action Network (CAN), a group of community leaders founded by Ensign, and how the group has grown and responded to community needs during the pandemic. Ensign was a guest on WITF-FM’s Smart Talk discussing CAN initiatives and how community leaders are collaborating to meet community needs during the pandemic. Ensign also was a guest on ABC27’s Good Day PA discussing CAN initiatives and a new website developed by the Center for Civic Learning & Action, which serves as an online clearinghouse of organizations that need help, as well as a resource for those who want to help during the pandemic. CAN also was highlighted in a blog post by Strong Towns titled “College & Community: A Blueprint for Towns Facing COVID-19.”

Ensign was quoted in the latitude(s) newsletter, which is edited by Karin Fischer, a senior writer for The Chronicle of Higher Education who covers the business of international education and the globalization of higher education. “Higher education is one of the few fields where the U.S. still has global leadership,” Ensign stated, noting that reputation could be diminished if optional practical training, the work program for international graduates, is suspended, driving students to study elsewhere.

Read more from the summer 2020 issue of Dickinson Magazine.