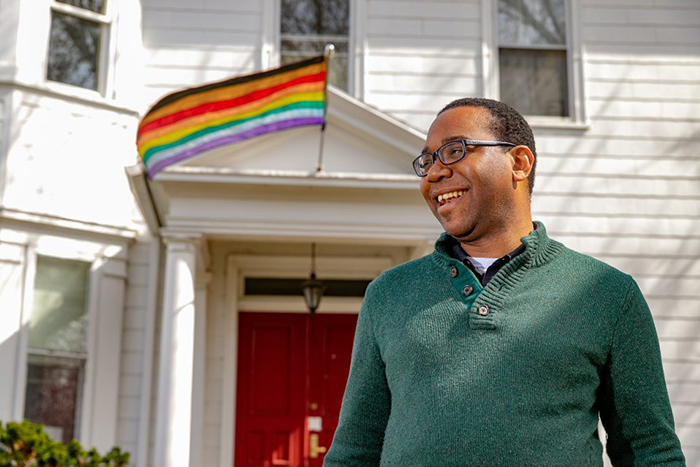 Liberace’s candelabra and bling-bejeweled hands. Johnnie Ray’s tears. Little Richard’s raucous ebullience. Johnny Mathis’ quiet sensitivity. Years before the start of the gay-liberation movement, and decades before “gender fluidity” entered our lexicon, each of these recording artists presented sexually ambiguous personas that diverged sharply from midcentury-America ideas of what a man should look like and how he should be. A celebrated book by a Dickinson administrator and music faculty member examines that cultural phenomenon and what it all means.

Vincent Stephens’ book Rocking the Closet: How Little Richard, Johnnie Ray, Liberace, and Johnny Mathis Queered Pop Music is an Advocate Best Queer(ish) Nonfiction Tome of 2019 and was supported by a grant from the American Musicological Society, funded in part by the National Endowment for the Humanities and the Andrew W. Mellon Foundation. Stephens is also co-editor of Postracial America? An Interdisciplinary Study (Bucknell University Press/Rowman & Littlefield, 2017), and he has written and maintained the popular-music blog Riffs, Beats, & Codas since 2015.

1. Tell me about your work as director of the Popel Shaw Center (PSC).

The PSC was previously the Office of Diversity Initiatives and was renamed in 2014 after Esther A.B. Popel, the first African American woman to graduate from Dickinson. I was started in June 2015.

I oversee annual diversity education programs for faculty, staff and students, including the Inclusive Leadership Student Training retreat for students, the Developing Awareness as a Management Practice workshop and faculty-oriented workshops on topics like inclusive pedagogy and cultural conflict resolution.

2. How did Rocking the Closet come about?

It’s an outgrowth of my dissertation research. My argument was based on the idea that people often think that before 1969 and the Stonewall Riots, people were closeted. And I wondered, “Well, if that were true, why is it that someone like Liberace was so popular?”

The four men in this book were very openly not following the masculine norms, but you didn’t necessarily know anything about their sex lives. In interviews, Johnny Mathis would talk about his parents or music lessons or being an athlete. He didn't talk about dating anyone. People just assumed that he hadn’t met the right woman yet. And then there are other performers who sort of played the freak, like Little Richard, who was able to stymie negative sexual stereotypes in black men by being this really over-the-top character. People were so focused on the makeup and the hair that they weren't necessarily even thinking about his sex life, you know?

3. In this book, and in your scholarship, you focus on midcentury America. What is it about that era that interests you?

For the book, I was really interested in seeing what was happening in popular culture before there was a formal gay liberation political movement. And I wanted to understand these four artists, and the people that they were, in the context of competing dynamics in the late ’40s through the mid-’50s.

More generally, when I was growing up in the ’80s, there was a lot of nostalgia for the ’50s and ’60s. It was the Reagan era, and The Wonder Years was a popular TV show. And my father is a Vietnam War vet. So I grew up really interested in learning about what actually took place during the war and in the decades before I was born. A lot of people were saying that the ’50s was an idyllic time, but I also remember feeling that the country was still processing the civil rights movement. I feel that a lot of our better writers and thinkers have poked holes in that sort of folk nostalgia, because the ’50s wasn't great for everyone. Sometimes you think you understand something, but when you take a closer look, you see that there’s a lot more going on under the surface.

4.   Your book is about music, and you teach music. Are you a musician?

Um, I think that would be a stretch. [Laughs] When I was a kid, I played the piano for a bit and I played the vibraphone.

5. When you were a kid, what did you want to be when you grew up?

I wanted to design automobiles. When I was a Boy Scout, I remember designing cars for the Pinewood Derby. They had templates for it, but I took it really seriously—I was, I don’t know, 8 or 9 at the time—and my father and I carved the cars out of wood.  When I was a teenager, I spent a lot of my spare time designing the exteriors and interiors—I was really interested in ergonomics—and thinking about innovations, like a transmission that has manual and automatic modes, and a backup camera to help you park.

6. What book has had the biggest impact on you?

A book by Alice Walker called In Search of Our Mothers’ Gardens. I would call it essential reading for anyone who cares about post-World War II American history. The prose is gorgeous. She covers so many different things from a personal but informed perspective.

7. What music captivates you?

I have boxes of music, all different styles. I’m most interested in people who are doing things outside of what we recognize as mainstream; people who go against the grain; people who are their own universes. Like Laura Nyro and Billy Childs. And Alison Krauss—in terms of musical and lyrical innovation, she’s very comparable to Bob Dylan.

I tell my students there's a mainstream history, and then there are these other stories. Let's see what else is out there. So we talk about rockabilly and about how women have often been excluded from the history. We talk about Brenda Lee and Bobbie Gentry.

8. You mentioned boxes of music. Do you have shelves of vinyl at home?

I have, like, 3,000 CDs. There is no computer that I have access to that can hold all of that music. But even if I could do that, I don’t want to listen to music through a computer all the time.

9. What are you writing now?

I’m writing about a show that aired on the CW network for four years called Crazy Ex-Girlfriend. I’m interested in what it said about life in the 21st century.

Reading is essential to my life. I’m very into aerobic and cardio exercise. I need to have time to go to a park and just put on music and walk. I love cooking, eating, spending time with friends, going to a great museum or gallery. I’ve had some opportunities to travel, and I always want to see more. Whenever someone asks me, “Do you want to go here? Do you want to do this?” I always say, “Yes!” I want to be everywhere all the time.