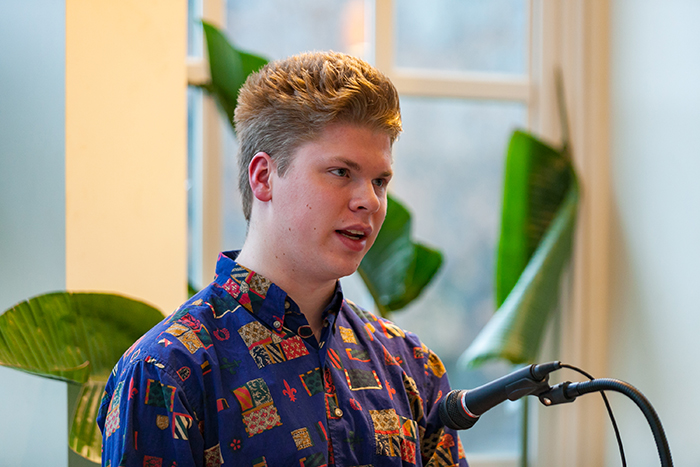 Students in the classes of '21, '23 recognized for exceptional work

There’s no more fitting spot to pay tribute to exceptional writing and research at Dickinson than the place where so much of it takes root. So when an audience of students, faculty and staff came together for a Feb. 12 ceremony commemorating outstanding student work, they gathered in the Waidner-Spahr Library, where countless Dickinsonians find information and inspiration, beginning in their very first weeks on campus.

The event marked the 10th anniversary of the First Year Seminar (FYS) Excellence in Writing Award, the second anniversary of the Waidner-Spahr Library Prize for Excellence in First Year Research and the inaugural year of the Waidner-Spahr Library Research Prize for Sophomores or Juniors. Each recipient delivered brief remarks, read an excerpt from their work and accepted a certificate and a $100 prize.

The class of ’23’s Evan Bates and Erik Smith are the recipients of this year’s FYS writing award. Each was nominated by a professor who led one of the First-Year Seminars this fall.

Bates was recognized for the essay he submitted to Assistant Professor of Philosophy Amy McKiernan and Writing Program Director Noreen Lape, as part of the Speaking Truth to Power seminar. During his remarks, Bates explained his scholarship on the narratives created through two 1937 art exhibitions curated by Nazi curator Adolf Ziegler. In doing so, he demonstrated the powers of the rewrite process.

“I went into this assignment thinking I would prove the power of art to change minds,” he said. “But as I went through so many drafts, I ended up switching my thesis around. I ended up arguing that the Nazis were successful in suppressing what the art was really about.” 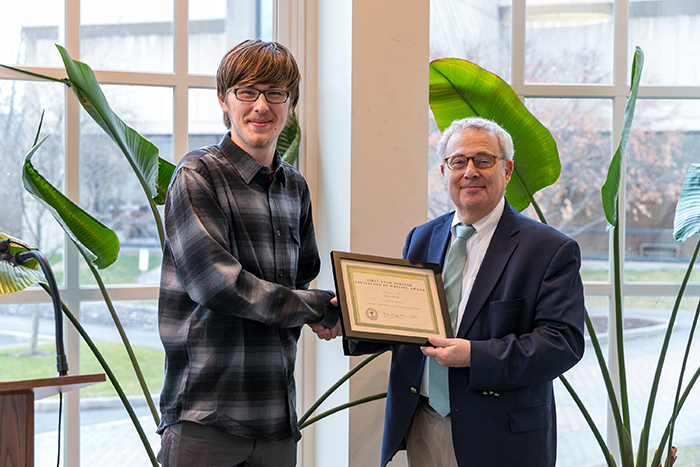 Smith’s essay, “Nonhuman Killers: Just War and How Military Robotics Delegitimize Authority,” considers the ethics of deploying military drone and robot technology in combat operations. His paper was an assignment for the Terminator vs. Astroboy First-Year Seminar, which was taught by Shawn Bender, associate professor of East Asian studies.

“We spent a lot of time in class learning about the ethics of robots in the workforce, and I wanted to explore something a little bit different,” said Smith, an international studies major. “What made this topic so interesting to me was that it extended a discussion of war beyond its usual boundaries.”

“I wanted to look at how an institution of higher education can promote underrepresented historical figures,” she said, “and I learned just how much effort it takes to understand a historical figure, much less commemorate them.”

Han Hong Cao ’21 (international studies) is the first student to accept the first Waidner-Spahr Library Research Prize for Sophomores or Juniors. She was honored for her use of census data, country studies, World Bank data and other Vietnamese-language and English-language sources to analyze inclusivity in urban planning in her home city, Ho Chi Minh City, Vietnam.

“I was interested to see what I could learn while examining a city so familiar to me,” said Cao, who performed the research as part of Professor of Political Science David Strand’s fall 2019 class in urban ecology.

Each of the award winners represents an important aspect of the student experience at Dickinson, said Neil Weissman, provost and dean of the college.

“Writing and research are central to everything we do,” he explained. “This is an event that recognizes these two most vital things we do—writing and research—and I particularly enjoy recognizing students who are exemplars of that.”