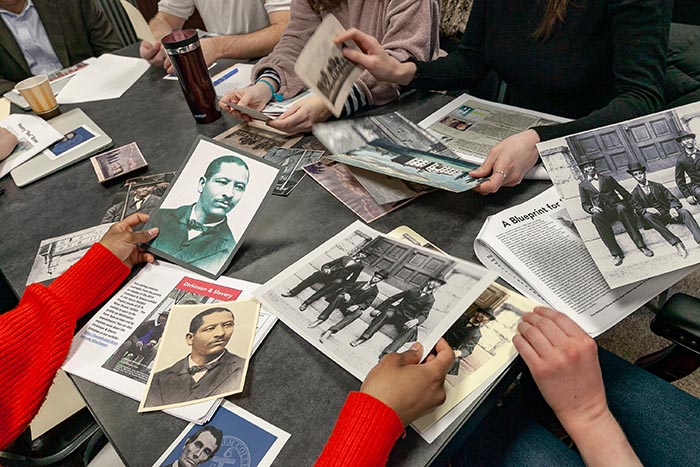 Students look through photos for the Dickinson and Slavery project.

In the late 1860s, Robert C. Young traveled the dusty road from Virginia to Carlisle to build a new life. Subsequently, across his decades of service as a Dickinson employee and local civil rights leader, this former plantation slave became a national news sensation when he sparked a movement to integrate the college. But his name had been lost to history—until now.

Young is just one of the African Americans whose stories are brought to light through Dickinson and Slavery, a new project that examines the college’s ties to the rise and fall of slavery, commemorates the lives of Dickinsonians during and after the Civil War and depicts a community ablaze with intense debates about the social changes afoot. It launches with a Feb. 1 open house and exhibition, 150 years after Young's arrival on campus and 400 years after the beginning of enslavement in America.

A new initiative of the college’s House Divided Project, Dickinson and Slavery helps teachers initiate nuanced classroom conversations about early American history by viewing it through the lens of Dickinson, a college chartered just north of the Mason-Dixon Line in 1783, when slavery was still legal in Pennsylvania

“Dickinson’s story is the story of the nation folded into one small place, because it was one of few antebellum-era colleges that enrolled roughly an equal percentage of students from Northern and Southern states,” says Matthew Pinsker, director of House Divided and Brian C. Pohanka Chair in American Civil War History. “So it serves as a great teaching tool, because you can see many of the battles and stories that matter in a larger sense playing out.”

Young began as a house servant in the Dickinson College president’s residence and moved his way up to janitor and, finally, campus police officer. He retired as the longest serving Dickinson employee of his century. During the 1880s he pressured the Dickinson preparatory school to enroll his oldest son by taking his grievances to the newspapers, and he was successful in temporarily integrating the college, setting the stage for sweeping social changes to come.

Noah and Carrie Pinkney sold pretzels, sandwiches, ice cream, cakes and pies on and off campus for four decades; Noah was also a Union Army veteran, and in 1951 the college erected a bronze plaque in his honor near East College (it’s now held in the college archives). Henry W. Spradley was an escaped slave and Union Army veteran who worked as a janitor at Dickinson, and after his death in 1897 college officials canceled classes and organized a memorial service. Today, his name is listed with other former veterans buried without headstones at Carlisle’s Lincoln Cemetery. 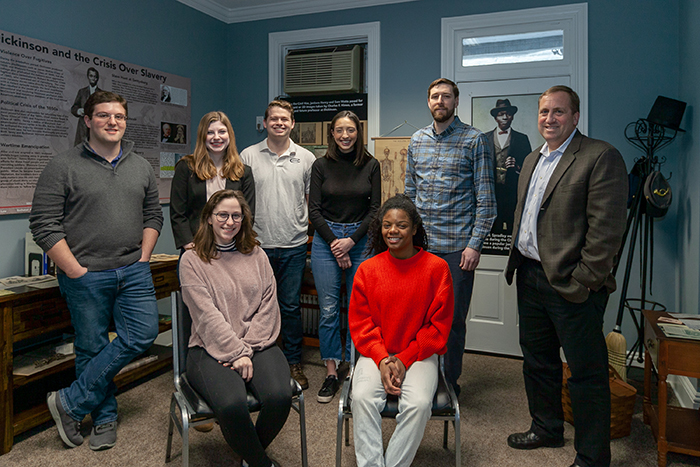 The banner image they created for the Dickinson and Slavery website includes both unretouched and colorized areas, maintaining the integrity of the original while also serving as a metaphor for the need to bring the memories of these African-American Dickinsonians more vividly to life.

Dickinson and Slavery also tells the story of Northern slavery through the eyes of white Dickinsonians, including the college’s earliest leaders.

Dickinson’s founder, Benjamin Rush, and namesake, John Dickinson, both spoke out publicly as abolitionists, and they emancipated their own slaves. Still, instead of doing so immediately, they set the terms for their slaves' emancipation gradually, and their personal correspondences reveals some ambivalence about the matter. Similarly, one of Dickinson’s most famous alumni, President James Buchanan, inherited slaves that he freed immediately, but he then indentured them as free servants for several years.

Another early alumnus was Roger Taney, chief justice of the United States. His proslavery decisions mark Taney as one of the most controversial Supreme Court justices in American history. But he also freed his own slaves. 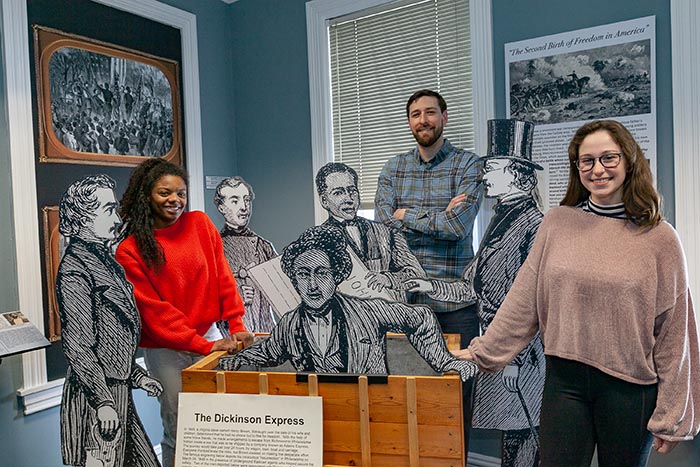 Students and educators at Dickinson and beyond can access these stories and resources through the project website and at an exhibition and open house at the House Divided studio on Feb. 1 from 10 a.m. to 4 p.m. Launched during Black History Month, curated by Pinsker and designed by students and Dickinson Web Development Specialist Ryan Burke, the exhibit is also open to the public and to groups and visitors by appointment Wednesdays from 9 a.m. to noon.

Through a grant awarded by the President’s Commission on Civic Engagement, House Divided will also contract with local teachers to build a Dickinson in Slavery curriculum for use in middle- and high-school classrooms. A teacher workshop is planned for March. College community discussions about possible wayside markers and plaques, community workshops and walking tours are underway.

Meanwhile, Dickinson and Slavery research is shared with researchers at other American colleges and universities through the Universities Studying Slavery Consortium, a group of more than 40 invited institutions studying post-emancipation, racism and slavery. (Current membership includes Brown, Columbia, Georgetown and Harvard universities; the College of William and Mary; the universities of Virginia, North Caolina, South Carolina; and Virginia Tech.)

“Most of this history has been forgotten or ignored, and it raises a lot of questions, such as how best to remember this, and what should the college and Carlisle be doing to commemorate the stories like this?” he says. “We’re just starting to uncover the information, which is the first step.”