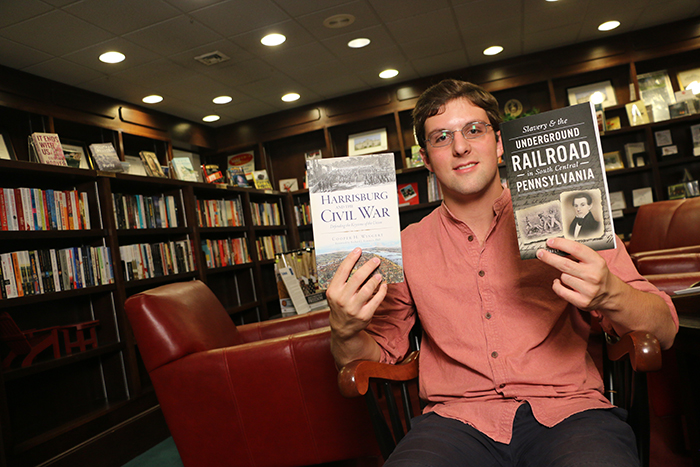 Cooper Wingert '20, with two of his most recent books. Photo by Joe O'Neill.

Gettysburg, Pa., is awe-inspiring for many fifth-grade field-trippers: They can gain a new appreciation for the people and events that shaped their nation as they traipse across the hallowed Civil War battlefield and mark the very spot where President Abraham Lincoln delivered his historic address. And after the field trip is over, the average fifth-grader might even want to learn more.

But Cooper Wingert ’20 was no average fifth-grader. And his field trip to Gettysburg spurred much more than a run-of-the-mill response.

Inspired to learn that the bloody American battle had been waged so close to his home in Enola, Pa., the young history buff set about to write all he could about it. “Quickly, I realized that I had written a lot, and if I wrote a little more, it might be a book,” says Wingert. So in short order, he edited a Confederate soldier’s diary, which he self-published at age 12.

More books followed. By the time he turned 15—before he was old enough to drive himself to research sites, like the state archives—Wingert was a budding expert on Civil War Harrisburg and was attracting local and regional media buzz, including the first of several guest-author spots on regional radio and TV programs. Today, the 18-year-old is the author of 10 books on local history, seven published nationally, and the youngest historian in the Civil War Education Association. Wingert also has lectured regionally, including a well-received presentation at the U.S. Army War College, and his books are stocked in national and independent bookstores.

Which means that when this Dickinson first-year student arrived on campus to take a Pre-Orientation course in creative writing, he already claimed three books on the College Bookstore shelves.

Those books are The Confederate Approach to Harrisburg (2012), winner of the Dr. James I. Robertson Jr. Literary Award for Confederate History; Harrisburg and the Civil War: Defending the Keystone in the Union (2013); and Slavery and the Underground Railroad in South Central Pennsylvania, released this past summer. All were published by The History Press.

In his most recent effort, Wingert writes about slavery in 18th-century Cumberland, Franklin, Adams and York counties, where slaves were freed at age 28, and about the beginnings of the Underground Railroad in this region—a hotspot for the freedom movement, in part because of its proximity to the Mason-Dixon line.

Wingert drew from public and private sources, including the J. Howard Wert Collection, which includes artifacts from all periods of American history; the Pennsylvania State Archives and the historical societies of Cumberland, York and Adams counties. While he found many resources relating to the Underground Railroad, materials on local slavery were harder to come by.

“My only available evidence might be a slave register listing the names of the 13 slaves owned by this individual or the seven slaves owned by that individual,” he says. “To document the names and ages of the slaves, and, as much as possible, write their story, I might be able to find a newspaper from several years later, documenting that one of the slaves had run away.”

Footsteps of a founding father

As exciting as it is to unearth new information, Wingert’s favorite part of the process is the actual writing. He also enjoys the chance to connect with fellow historians, typically much older than he.

“We trade work back and forth and get multiple opinions,” says Wingert, who often corresponds by letter. “When you meet authors who think like you do or don’t think like you, and they present an intellectual challenge to you, it’s always fun.”

More books are in the works, including another nonfiction work and a novel, which Wingert hopes to complete within the next few months. As he settles into his first year at Dickinson—an institution that’s home to the House Divided Project and steeped in American history, and the only college to which he applied (and through Early Decision)—Wingert says he feels right at home.

“Dickinson is a great place for writing,” he says, adding that as a history lover, he’s especially glad to have a class in Old West, the college’s oldest, most storied building. “I’ve really just enjoyed the experience so far.”