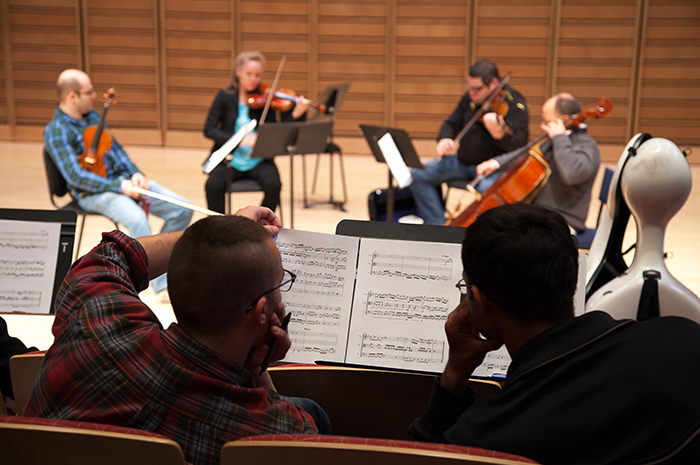 Student composers look on as their works are performed by the Amernet Quartet as part of an on-campus residency in 2014. Photo by Carl Socolow '77.

Music-composition software makes notation a breeze—gone are the days of meticulously inking in evenly spaced notes, using rulers to create straight stems—and the software's handy playback function gives composers a rough idea of what an evolving work will sound like in performance. But it is a pale imitation of the real thing.

“It’s definitely a little lifeless and colorless—it doesn’t really replicate the way you hear it in your head, or tell you what a musician will bring to it,” says composition student Brian Reid ’17. A computer cannot make virtuosic interpretations; it cannot provide meaningful feedback or demonstrate the technical challenges a given passage might pose to an oboist, as opposed to a violinist, he adds. “In fact, a lot of times, all of the instrument parts sound exactly the same. So the opportunity to hear the music played by real, professional musicians is awesome.”

It was awesomeness all around for Reid and fellow composition students earlier this semester, when members of a celebrated international string quartet performed their works-in-progress in the Rubendall Recital Hall, offering expert guidance and advice.

Lauded by The New York Times for their “intelligence” and “immensely satisfying” performances, the Amernet String Quartet had performed in prestigious venues around the world before coming to Dickinson to serve an October residency. During their stay, musicians Misha Vitenson and Marcia Littley (violin), Michael Klotz (viola), Jason Calloway (cello) presented a public concert, visited music classes, met informally with students and gave master classes and workshops, including an Oct. 9 composition opportunity for students of Professor of Music Robert Pound.

“Most of the students [in the workshop] had never composed a note before this semester,” says Pound. “Our residency program is very special in this way.”

The workshop is just one of the ways that students can work directly with professional artists during their time on campus. Last year alone, first-year students created mashups with a little guidance from Caroline Shaw, the youngest recipient of the Pulitzer Prize for Music, while others performed with Shaw’s award-winning ensemble, Roomful of Teeth. Students also worked with composer Mohammed Fairouz, in 2013-14, along with international musicians Singer Pur, JACK Quartet and Kaoru Watanabe; visual artists Sue Coe, Dee Jenkins and Judith Schaechter; four professional choreographers; mime Bill Bowers; and poet Paul Muldoon.

This week, the Dickinson community also celebrates the fruits of a previous artistic residency. Trumpeter Jack Sutte released a new CD last week that includes his interpretations of compositions by Pound and by Ilana Rainero-de Haan ’12 and Ryan Karr ’13.

Rainero-de Haan and Karr were enrolled in a composition course during Sutte’s residency in fall 2011. A lecturer at Baldwin Wallace University Conservatory of Music who was principal trumpet in the Bergen Philharmonic Orchestra (Norway) before joining the Cleveland Orchestra in 1999, Sutte read fanfares for trumpet that the students had written as a class assignment. After working with the young composers, he premiered both works in a public concert on campus. Three years later, Dickinsonians can again listen to those student fanfares and two 2011 compositions by Pound on Sutte’s Fanfare Alone, released last week and available through iTunes, CD Universe and Amazon.

Reid, who played trombone and sang in high school, has not yet had any of his works professionally recorded. But for a beginning composition student with five more Dickinson semesters ahead, he’s already on a stellar path, having worked with Amernet this semester as well as Roomful of Teeth and JACK Quartet last year.

“We wrote [brief sequences] for JACK Quartet as part of my music-theory class,” says Reid, who has since declared a double major in music and mathematics, “and it was absolutely amazing to me that, as a first-year who hadn’t even declared a music major, I was able to have a professional group play my piece. I don't think students at most conservatories get that chance.”