Do You Know Jack? 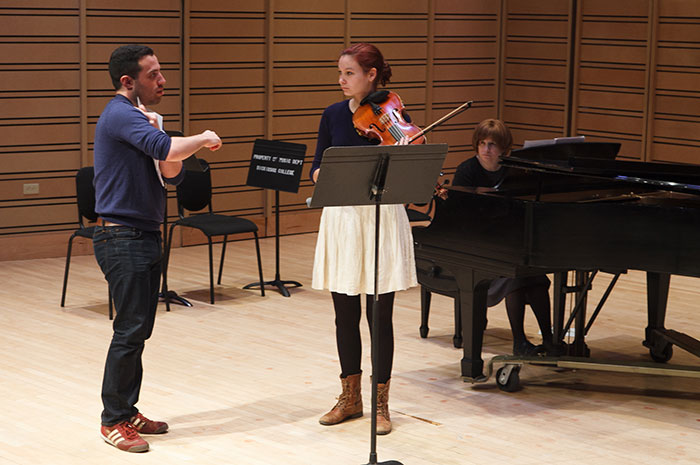 Music major Lisa Johnsen '17 gets personalized tips during a March 27 master class at Dickinson. JACK is one of nearly a dozen artists-in-residence to visit Dickinson this year.

When the house lights go down, JACK Quartet ignites the stage with the "explosive virtuosity" (Boston Globe) and "viscerally exciting performances" (New York Times) for which it is famous. But last Thursday afternoon, as the musicians performed student compositions in a well-lit Rubendall Recital Hall, the vibe was friendly and low-key, putting the student composers at ease.

“I’ve never heard that piece performed live before,” said Stephen Reale ’14, a double major in music and neuroscience and co-recipient of the Weiss Prize for the Arts, moments after the quartet finished playing a short piece he wrote last year. “And I like what I’m hearing, which is a relief.”

The workshop was part of JACK Quartet’s artistic residency, one of nearly a dozen on campus this year. Violist John Pickford Richards, whose first name supplies the "J" in "JACK," violinists Ari Streisfeld and Christopher Otto ("A" and "C") and cellist Kevin McFarland (aka "K") worked directly with students throughout the week. As New Music USA Trailblazer Award-winners who have performed Carnegie Hall, the Lincoln Center and at comparable venues around the world, they had plenty of expertise and experience to share.

The week ended with a major public concert of music that the quartet had recently performed, to much acclaim, at the Metropolitan Museum of Art. Political-science major Rokhsana Daghoghi ’14, who is taking a music-appreciation class this semester, attended a Tuesday-afternoon preview of the concert, staged in the reading area of the Waidner-Spahr Library, and was energized by what she heard.

“We listen to a lot of classical music in class, but it’s very different to see the musicians perform live,” she noted. “Watching their body language—their focus, the way they use their instruments and cue each other—brings a different dynamic to the experience and helps you better understand the composer’s intent.”

Jamie Leidwinger ’15, who majors in music and political science, took part in the composition workshop, along with Reale and Nicholas Cardelia ’16. Sitting in the audience just moments after the acclaimed musicians performed her work, she couldn't help but smile. “It’s been a really exciting week for all of us,” she told the quartet. “It really is an amazing opportunity.”