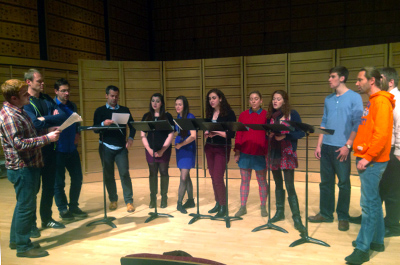 Acclaimed German vocal ensemble Singer Pur is much more famous in Europe than in America. But the group received a hometown welcome at the Rubendall Recital Hall on Nov. 16 in an electrifying concert that packed the house.
Formed in 1992 by members of a celebrated boy choir, Singer Pur today boasts an unusual lineup of five male vocalists (three tenors, a baritone and a bass) and one female (soprano) and a vast repertoire that spans continents and centuries. The ensemble has recorded 20 CDs and has garnered international awards with a repertoire that ranges from ancient music to American and European classics and rock.
During their weeklong stay on campus, Singer Pur met informally with students and professors, offering advice to students who hope to pursue musical careers. The professional vocalists also worked closely with students—individually and within small-group ensembles—and led classes in several disciplines that enriched what the students are learning this semester while deepening their appreciation for the public concert to come.
Music-history students in the midst of a lesson about the origins of ancient music, for example, gained insights from the professional musicians who would soon perform those works in concert, while students in music-theory courses analyzed the structure of the songs. German-language students translated German texts with help from the native-language musicians who would sing them. Student-vocalists discovered the musicians’ approaches and techniques, and student-conductors learned how the musicians, who are not led by a conductor, cue each other subtly onstage.
Music major David Cochrane ’14, a student-vocalist and conductor, took the learning opportunities even further when he arranged an informal singalong with the ensemble. That evening’s highlight arrived when members of Dickinson's choral ensembles shared a challenging piece by an American composer Singer Pur was unfamiliar with, adding a touch of mutual musico-cultural exchange to the experience.
Professor of Music Blake Wilson, who met Singer Pur in Italy in 2011 and oversaw their Dickinson residency, said that this deep level of engagement—both with the material and the musicians who presented it—was the source of the exceptional response to Singer Pur’s on-campus concert.
“Singer Pur were extraordinarily generous with their time—they were willing to meet with students morning, noon and night—and the depth of their engagement was exceptional,” he said. “So by the time they took the stage, they had many fans all across campus who already knew a bit about one aspect of their work. This made the final concert of the residency a real culmination. And the cumulative effect of the residency made it a whole much greater than the sum of its parts.”
Wilson added that the musical exchanges continued when the ensemble met with students and faculty members for a post-concert gathering at Wilson’s home, just as Roomful of Teeth had a few weeks before. “It was a beautiful night and we had a bonfire going, and at one point, Singer Pur just started singing ‘Danny Boy’ in perfect, six-part harmony—that was magical,” he recalled. “Many of the students told me later that it was an evening they’ll never forget.”

Singer Pur is only one of the many musical residencies to be held at Dickinson this year. In October vocal students worked with composer Mohammed Fairouz, who will return for a student performance of his work in the spring. In November—just two weeks after Roomful of Teeth’s residency—Singer Pur took the stage at the close of a weeklong residency marked by intense on-campus involvement. The JACK Quartet will serve a weeklong residency in March. In December students across several disciplines will learn about Japanese musical culture from Taiko drummer Kaoru Watanabe.

Dickinson also hosts visual-art, dramatic and dance residencies throughout the academic year. Artists visiting campus this year include printmaker Sue Coe, painter Dee Jenkins and Jane L. and stained-glass artist Jane Schaechter. Students in the Department of Theatre & Dance interacted with four professional choreographers in November; in February, they will get a chance to meet Bill Bowers, a professional mime and former student of the legendary Marcel Marceau. Pulitzer Prize-winning poet Paul Muldoon will present the 2014 Stellfox lecture April 2.