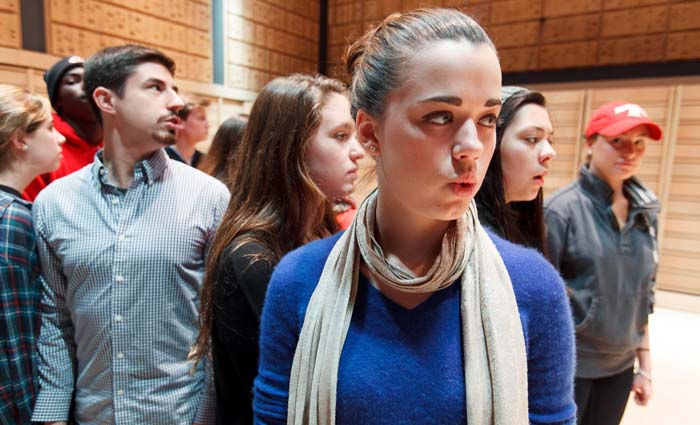 Students sing in a workshop with tenor Eric Dudley (far left) of Roomful of Teeth.

“It was pretty exciting to be out there, especially since we didn’t know exactly what would happen,” said Marcus Omowole ’17, one of approximately 15 students who took the stage with avant-garde vocal ensemble Roomful of Teeth. “That was part of the fun.”

A critics’ darling and NPR favorite, Roomful of Teeth is a young, cutting-edge octet that performs original and commissioned works and often incorporates global and otherwise nontraditional vocal techniques into its theatrical performances. The award-winning ensemble made international headlines this year when alto Caroline Shaw earned a Pulitzer Prize for music for Partita for Eight Voices, a work she had composed for the octet. At 30, Shaw is the youngest-ever recipient of the Pulitzer Prize for Music and one of few women composers to be granted the award.

Like all musical-artistic residents, Roomful of Teeth members spent a week on campus, working closely with students in formal and informal settings before presenting a performance in the Rubendall Recital Hall. This performance, however, incorporated creative contributions by first-year students—some of whom had no prior musical experience.

The students had elected to take a first-year seminar related to music. One, taught by Associate Professor of Music Lynn Helding, explored the intersection of music and neuroscience; the other, taught by Associate Professor of Music Robert Pound, offered an introduction to recording technology and a look at the way it has changed music. Together, students in these seminars formed a learning community—a cohort of first-years with like interests who join together throughout the year for thoughtful reading and discussion centering on a common theme.

They were presented with a rare opportunity: The chance to either sing onstage with Roomful of Teeth or to create an electronic composition that would premiere during the vocal octet’s performance. “Music students have composed works reviewed by and occasionally, performed by faculty and guest artists, but the ability to be a part of a residency in this way, and as a first-year student, is definitely a first for us,” Pound said.

Omowole and Lauren Bobyock ’17 elected to attend Roomful of Teeth’s vocal-improvisation workshops. They sang, sometimes Gregorian-chant style, and whistled, stomped feet, clapped hands and delivered syncopated spoken phrases. Along the way, they learned to listen to one another closely and to fine-tune their improvisations accordingly.

“It was fun to be exposed to this new kind of music—I’d never heard anything like it before,” Bobyock said.

During rehearsals, the students sketched out the broad strokes of the piece they would perform during Roomful of Teeth’s concert, but as Bobyock noted, much of the finished product was left to the in-the-moment collective whim and happenstance. “We all felt comfortable up there, though, because we’ve gotten to know each other pretty well in the past few weeks, since we’re all in the same learning community,” she said.

Students in Pound’s composition class, meanwhile, had been using specialized software to construct two-minute experimental compositions. Working in small groups, they blended snippets from a recording of a Roomful of Teeth performance with original music and found sounds, creating something entirely new.

For Lisa Johnsen ’17, it was all about the process. “It was really fascinating to see all the ideas that the other people in my learning community came up with—they were all very different,” said Johnsen, who worked with Grace Tuscano ’17 and Max Walkingshaw ’17 to produce an atmospheric work with philosophical overtones. “I learned a lot about different approaches to music and sound.”

Notably, all of the student-composers in the seminar had a chance to workshop with Shaw, the most celebrated composer of the year. “She really took time to work with us and pointed out the things we could develop,” Tuscano said.

“We all really enjoyed getting to know the performers not only through their performances, but through friendly conversation,” said Paige Hamilton ’17, clearly thrilled to hear her music composition performed before a live audience. “It was really very special.”

Roomful of Teeth is only one of the exceptional musical residencies to be held at Dickinson this year. In October vocal students worked with composer Mohammed Fairouz, who will return for a student performance of his work in the spring. In November—just two weeks after Roomful of Teeth’s residency—Singer Pur took the stage at the close of a weeklong residency marked by intense on-campus involvement. The JACK Quartet will serve a weeklong residency in March. In December students across several disciplines will learn about Japanese musical culture from Taiko drummer Kaoru Watanabe.

Dickinson also hosts visual-art, dramatic and dance residencies throughout the academic year. Artists visiting campus this year include printmaker Sue Coe, painter Dee Jenkins and Jane L. and stained-glass artist Jane Schaechter. Students in the Department of Theatre & Dance interacted with four professional choreographers in November; in February, they will get a chance to meet Bill Bowers, a professional mime and former student of the legendary Marcel Marceau. Pulitzer Prize-winning poet Paul Muldoon will present the 2014 Stellfox lecture April 2.