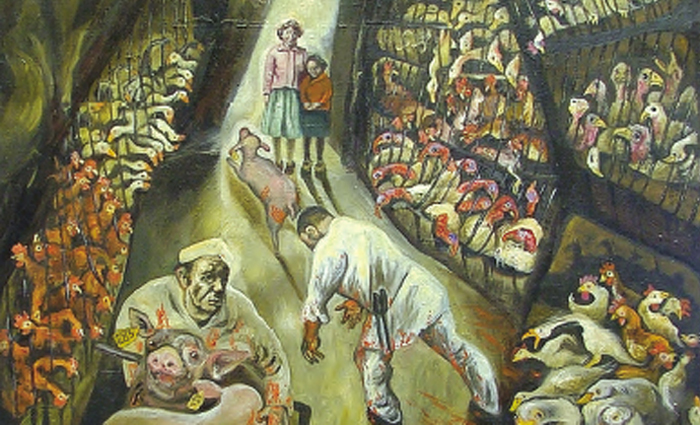 Sue Coe still remembers the day in 1960 when she spied a runaway pig scrambling across a road with several burly, aproned men in tow. Coe, then nine years old, asked her mother about the incident and learned that the pig had escaped from the slaughterhouse down the road.

“The vision of the escaped pig couldn’t be ignored; she became louder and louder in my mind,” Coe writes in her essay “The Art of Love.” “I went with my friend to the door of the slaughterhouse and demanded to be showed around, as I wanted to know what was happening.”

More than 50 years later, Coe is still demanding to go behind slaughterhouse doors—only now as an internationally recognized artist-activist. Coe will discuss her work and her cause during a three-day residency at Dickinson that will include informal meetings with students and professors, a public forum, classroom visits, an exhibition and a ceremony honoring her as the recipient of the 2013 Dickinson Arts Award.

Born in England in 1951, Coe pursued a master’s degree at London’s Royal College of Art before moving to New York, where she still resides. Her sometimes nightmarish artworks, which combine elements of expressionism, cartoons and illustration, poignantly cast a stark light on the suffering of the marginalized, victimized and oppressed. Her work has been shown in galleries and museums worldwide, including a retrospective exhibition at the Hirshhorn Museum, and her paintings, prints and illustrations have appeared on book covers and in the New York Times, The New Yorker and Rolling Stone.

Through these works, Coe takes a humanist-Marxist approach to a range of social-justice issues, including class warfare, political corruption, poverty and violence against women. But it is her writing and artwork about the horrors of the meat industry—brought into the public spotlight with the publication of her book Dead Meat—that brought her international recognition.

Some of Coe’s animal-rights pieces will be shown at Dickinson Nov. 1 to Feb. 8, in The Trout Gallery’s exhibition “The Ghosts of Our Meat.” Each teems with a smoldering sense of injustice and intensity usually reserved for human subjects.

Coe summons that intensity of feeling for animals (Coe calls them “nonhumans”) by depicting her animal subjects as individuals—unique, sentient and deserving. In this light, as Northwestern University’s Stephen Eisenman writes, “the slaughter of an animal becomes a murder, the butchering a desecration, and the sale and consumption of meat something ghoulish or macabre.”

A portrait, “Debeaking,” presents a soulful-eyed chicken with a gaping wound where a beak had been. Another work shows a woman in leather boots and a fur hat and coat, walking along a wooded pathway at night. The woman turns around to see a seemingly endless parade of shivering, furless animals, each casting a thin, ghostly shadow, and a bright light illuminates the scene, indicating that a profound realization has occurred. As the title of the piece indicates, “The Ghosts of the Skinned Want Their Coats Back.”

Many of Coe’s works underscore the violence inherent in the meat and fur industries by punctuating muted-tone and black-and-white canvases with pops of blood-red.

A vivid smear outlines a deathly smile in “You Consume Their Terror.” The smile appears to belong to a corpse, and on every surface of this monstrous face—in the nasal cavity and eye sockets, on cheeks and chin and teeth—we see images of the consumed: cows, pigs, fowl and fish. While this work could be directed toward individual meat eaters, another—titled “Cruel”—unambiguously blames the capitalist system and those who turn its gears.

In the top panel of “Cruel,” we see a lamb with a cut throat, red blood flowing down. In the bottom panel, the blood transforms into a stream of gold coins and cascades into a moneybag. The moneybag is clutched—greedily, gleefully—by a portly man in top hat and tux.

This message is challenging, but it was created to provoke, not to please. As Coe writes, “there are people who languish in unreality; they want lies. … As long as they do not personally see the blood and death, they are contented.” Her job, as she sees it, is to compel them to see the truth.

Yet for all of the darkness and dismay that Coe shows us, there are elements of strength, beauty and hope. Coe asks viewers to do more than just ponder this state of affairs. We are called to intervene.

After all, the nine-year-old who demanded to see inside the slaughterhouse was driven not just by outrage and curiosity but also by the belief that knowledge brings new possibilities. The artist who paints blood-red scenes of the slaughterhouse does so not solely out of a need to express but also because she believes that carnivorous behaviors and attitudes are the result of socialization, not nature.

Redemption, Coe asserts, is within reach.