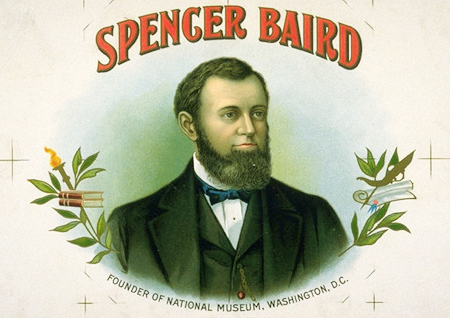 Spencer Fullerton Baird, a Dickinson graduate and faculty member, was one of the most noted naturalists, zoologists and collectors of his day. Baird entered Dickinson College as a freshman in 1837 and received his A.B. degree in 1840 at the age of seventeen. Following graduation, Baird attended the College of Physicians and Surgeons in New York for one year, but found that he had a dislike for medical practice and returned to Carlisle to continue with his studies. In 1843, Dickinson College conferred upon him the degree of Master of Arts, and appointed him professor of natural history in 1845. In 1848 he was made chair of the departments of natural history and chemistry. He is credited with having introduced laboratory practice and field exploration to American education as an essential part of instruction in natural history.

Baird was appointed as the first Assistant Secretary of the Smithsonian Institution in 1850 and in that position was the driving force in creating the U.S. National Museum at the Smithsonian Institution. When he moved from Carlisle to Washington, DC, it reportedly took two freight cars to transport his collection of birds, lizards, fish, skins, and skeletons, weighing 89,000 pounds. Many of these specimens can still be found in the Smithsonian Museums. In 1878 he was appointed as the second Secretary of the Smithsonian. Baird also served as the first U.S. Commissioner of Fisheries from 1871 till his death in 1887, in which capacity he helped found the Marine Biology Laboratory at Woods Hole, Massachusetts. He was an early member of the National Academy of Sciences, and served as a trustee for the Corcoran Art Gallery, Columbia University, and Dickinson College. A bibliography of his works from 1843 to 1882 contains nearly 1,200 titles, including The Birds of North America, Mammals of North America, and A History of North American Birds.