Ahead of the Curve: Dickinson Celebrates Landmark for Arctic Studies Program 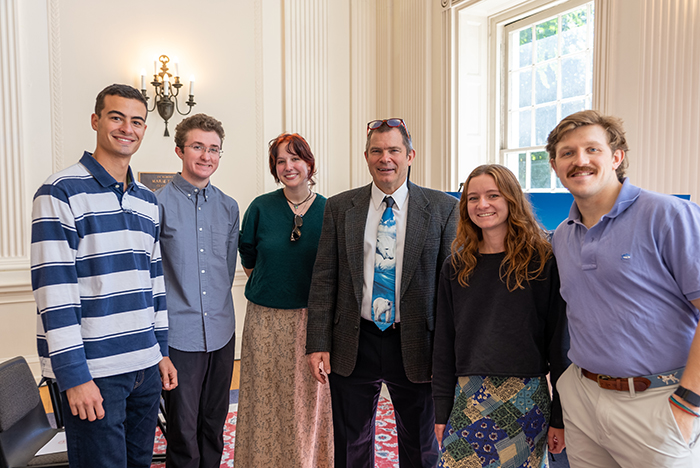 Edwards and a few of his students who've conducted fieldwork in the Arctic. Photo by Dan Loh.

Homecoming & Family Weekend kicked off with a major milestone for one of the college’s most distinctive new academic programs. The Friday afternoon celebration, led by President John E. Jones III ’77, P’11, was the official installation of Professor of Earth Sciences Ben Edwards as Dickinson’s inaugural Moraine Chair in Arctic Studies.

Edwards’ research focuses primarily on interactions between volcanoes and glaciers, Arctic and Alpine climate change and the impacts of volcanic ash on plants. During the past decade, he’s led student-faculty research trips to Alaska, Iceland, Greenland, the Canadian Arctic, British Columbia, Chile and Peru. A dedicated educator and mentor, Edwards has also long served the college through committee work and as a past Posse Foundation faculty mentor. He has also traveled with Alumni Global Adventures groups to lecture in Iceland, the Galapagos Islands and Italy.

“He touches all of the bases of excellence in teaching, service and leadership,” said Neil Weissman, provost and dean of the college. “Ben is also enthusiastic about connecting the sciences to the wider world—an area of particular importance in light of climate change.” 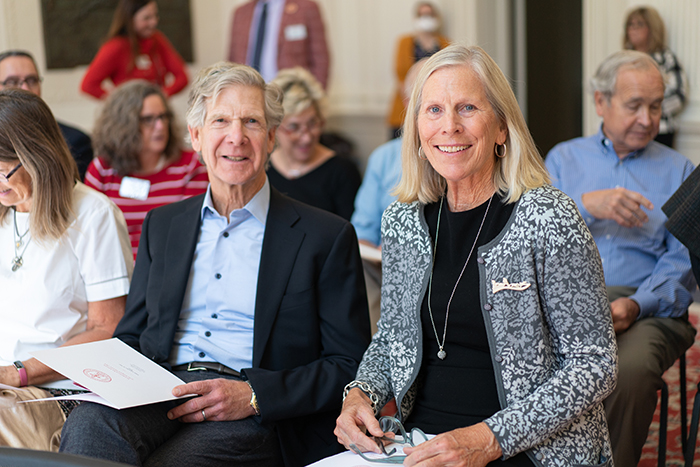 Decked out in a polar bear tie, Edwards thanked colleagues who’ve worked with him on Arctic fieldwork and programs and offered special thanks to alumni benefactors John ’78, P’06 and Susan Wyckoff Pohl ’80, P’06.

The Pohls took their first Dickinson fieldwork trip in 2013 and have since supported hands-on student-faculty research on ice melt, lakes, glaciers, archaeology and volcanic rocks and Indigenous cultures in Canada, Iceland, Greenland and Alaska, often accompanying the research teams. Members of Dickinson’s Founders Society, they view their support as a way to deepen students’ educational experiences and inspire them to better the world. Susan, a former Board of Trustees member, also envisions the college’s Arctic programming as a distinctive aspect of the Dickinson education.

“My dream is that students will come to Dickinson specifically for Arctic studies and fieldwork and will one day lead the way” in the fight against climate change, she said.

Reaching across the curriculum

That dream is an emerging reality, as Dickinson’s Arctic & Alpine Climate Change Research program gains traction. Nearly 60 people have participated in Dickinson’s Arctic fieldwork trips so far, and some, like four-time Arctic-trip veteran Will Kochtitzky ’16, have gone on to pursue related careers. Dickinsonians have presented Arctic fieldwork data at national and international scientific conferences, and they’re preparing three manuscripts for publication in scientific journals. 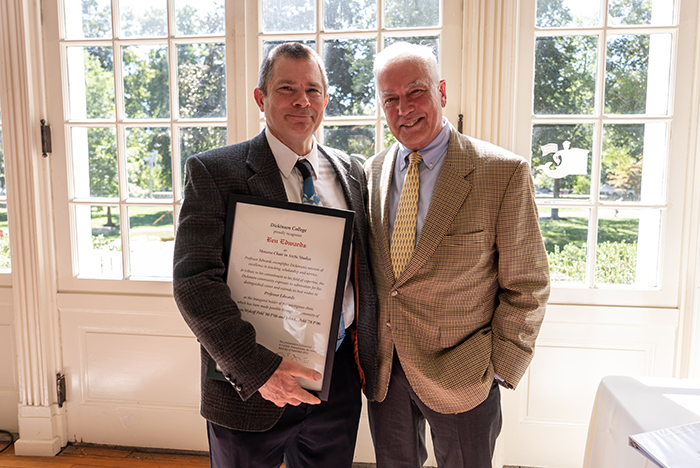 With the Pohls’ support, Dickinson formalized the Arctic studies program last year with the creation of the Moraine Chair position and a dedicated introductory course in Arctic studies, with built-in annual summer research trips. Through the Pohls, Dickinson has established connections with the Smithsonian Museum of Natural History Arctic Studies Center. The college also is connecting with the University of Ottawa’s glaciology research group and is deepening connections at the University of Maine Climate Change Institute, which partners with Dickinson through a graduate linkage program.

And because of the Arctic’s unique geopolitics, cultures, history and ecosystem, it’s a fertile topic for study across the curriculum. This year, a new faculty Arctic study group has formed to help faculty in a wide variety of disciplines to learn more about the Arctic and how they might incorporate Arctic studies into their courses. Seven faculty members, representing the sciences, the arts and world languages, are taking part.

Ahead of the curve

After the ceremony, Patrick Noonan ’23 (earth sciences) articulated just how impactful hands-on student-faculty research through the Arctic studies program can be and noted that it was a key factor in his decision to attend Dickinson. He said he appreciates the ways that the Arctic studies program illuminates consequential effects of climate change. “Focusing on the effects of climate change in one place helps people gain an understanding of the very real challenges we face,” he explained.

Edwards agreed. “The program is doing what Susan hoped it would do: It’s spurring students to go on and continue their educations and to keep in mind what they’ve learned about the Arctic,” he said. “Dickinson is ahead of the curve in this area, and there’s a lot of good work ahead.”