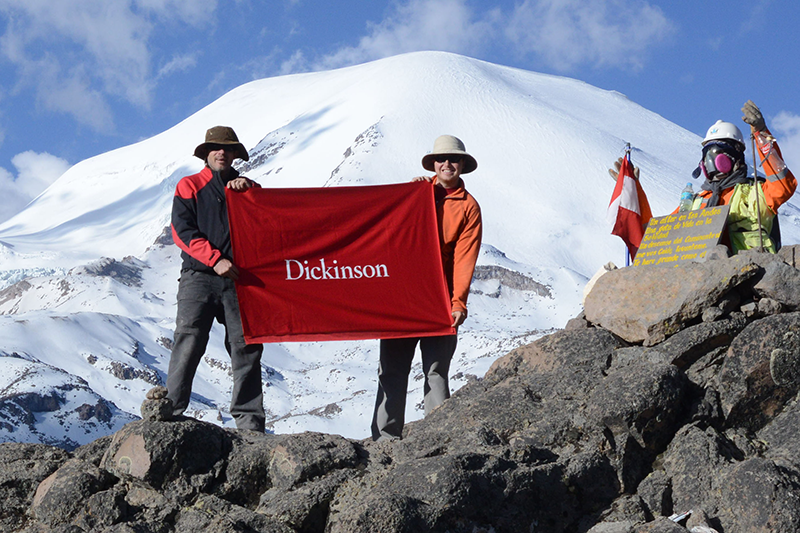 Professor of Earth Sciences Ben Edwards (left) and Will Kochtitzky '16 hold a Dickinson flag in front of a glacierized volcano in Peru, where they conducted fieldwork in 2015.

Last winter, Will Kochtitzky ’16 was a rising-star earth-sciences major with a promising senior thesis underway. Today, he’s a grad student, and he just presented original research at the largest earth and space science meeting in the world. "It was a great experience,” said Kochtitzky, a two-time presenter at the American Geophysical Union (AGU), “because over 20,000 scientists from around the world gather there to talk about the latest research in earth and space sciences.”

The research was an extension of Kochtitzky's senior thesis at Dickinson, and it was inspired by fieldwork Kochtitzky conducted in summer 2015 as part of a student-faculty team led by Professor of Earth Sciences Ben Edwards. After helping to investigate the rate of short-term ice shrinkage on El Nevado Coropuna, a glacierized volcano in Coropuna, Peru, and presenting the team’s findings, the class of 2016 member developed a senior thesis that took a close look at changes in snow cover on that volcano over time.

Working under Edwards’ direction throughout his senior year, Kochtitzky used GIS technology and 258 satellite images, downloaded from the United States Geological Survey’s Landsat archives, to measure snow cover on El Nevado Coropuna. Because of the vast amount of data and the quality of the satellite images’ spatial resolution, he was able to track snow cover on the volcano over the span of 30 years.

Kochtitzky discovered that when the area was experiencing El Niño-like conditions, there was less snow cover on the glacier, and that La Niña-like conditions produced more snow cover. These findings were consistent with previous research on snow cover in the region, and it’s critical information for the 100,000 local villagers who rely on melting snow as a water supply for their homes, crops and electrical systems. Better understanding the rate of water loss and snow-depth, Kochtitzky notes, can aid in water-use planning, as well as hazard mapping, since an eruption of the volcano would lead to catastrophic flooding. A report of his presentation is published on the NASA website.

That high-profile work is the latest in a series of benchmarks for the recent Dickinson grad. A Baird Sustainability Fellow and Benjamin Rush scholar who earned a $138,000 National Science Foundation research fellowship in 2016, Kochtitzky attended the 20th Conference of the Parties to the United Nations Framework Convention on Climate Change and co-initiated a partnership with the Volcano Observatory of Peru in Arequipa. Also as an undergrad, he conducted student-faculty research in Iceland, Canada and Greenland and Bolivia, in addition to Peru, and earned two campus fellowships, contributed to nine research papers, presented at two major conferences and earned four research prizes—all while earning wilderness first-responder certification, heading the Geology Club and Outing Club and serving on the Presidential Commission for Environmental Sustainability and the Sustainable Investment Task Force.

Seven months after graduation, Kochtitzky continues to use GIS and remote sensing to further investigate climate change, this time as a graduate student at the University of Maine, where he joins fellow NSF and Baird fellow Anna McGinn '14. As part of the university’s School of Earth and Climate Sciences, he’s measuring the volume of icebergs in Greenland in order to determine melt rates and freshwater flux in glacial fjords. He’s also planning a summer 2017 trip to the U.S.-Canada border, where he’ll use ground radar to determine the volume of Alaskan and Yukon glaciers and quantify sea-level rise potential.

While on winter break, Kochtitzky is finalizing a manuscript of his research on El Nevado’s snow cover, and plans to co-publish the paper, with Edwards, in a peer-reviewed journal. He’s on track to earn his master’s in 2018. “I’d like to continue this line of work in helping to better understand the current changes we are observing in the cryosphere,” he says. “Better understanding glacial change around the world is important for many reasons including sea level rise, water resources and natural hazards.”