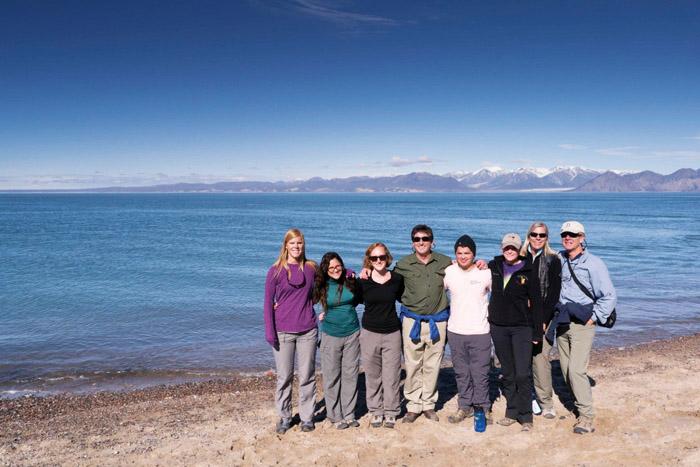 Dickinson’s earth sciences department has been fortunate to have many opportunities to offer out-of-classroom experiences to students. Faculty research projects have taken them to Montserrat and Costa Rica. Classes have ventured to the Galápagos Islands and Iceland. The David and Cary Cassa Fund, created by Mary Rose Cassa ’76, has funded fieldwork in Scotland and Sicily.

Through his work with the Discovery in Geosciences (DIG) Field School, John Pohl ’78 is highly invested in experiential learning. “It’s about getting students to really touch and feel and experience science,” he explains. Susan Wyckoff Pohl ’80 shares his passion, and the pair proposed a trip.

“The Pohls approached me about exploring Baffin Island and asked whether there would be any educational benefit to taking students along,” recalls Marcus Key, Joseph Priestley Professor of Natural Philosophy. “So I did a little research, and wow, it was a no-brainer.”

Four earth sciences majors — Liz Plascencia ’16, Melanie Campbell ’15, Leslie Milliman ’14 and Aleks Perpalaj ’14 — were selected, and they were joined by the Pohls’ daughter Merryl, a 6th-grade science teacher. And then the arctic adventure began.

“I’ve never been anywhere that interesting,” says Melanie Campbell ’15. “Never even heard of Baffin Island, and going to the artic? Not many people can say they’ve been to the arctic.”

The group converged in Ottawa, Canada. One full day and three planes later, they reached their first stop: Pond Inlet on Baffin Island. Their first base camp: at the foot of a monumental glacier. Their second stop: two full days of sea kayaking. They hiked. They fished. They awoke to polar bear tracks mere feet from their tents and took a polar plunge inches from an iceberg. They cooked meals on gas stoves and subsisted sans deodorant so as not to attract the wildlife.

Open. Immense. Vast. Look in one direction and you see bright white icebergs jutting out of sparkling blue water. Turn to another, and there stand massive rocky outcrops forged of sediment, Cretaceous sandstones or multicolored metamorphic rock. Turn again and witness green tundra full of native vegetation and wildlife.

They witnessed visible evidence of climate change. Most apparent was the glacial retreat, which left large mounds of sediment and newly formed lakes where once there had been glaciers.

“We were able to see, this is where a glacier was 10 years ago, and now it’s backed up a few hundred meters,” says Perpalaj.

This fall in Key’s Sedimentology and Stratigraphy class, students learned to graph data in Excel that illustrates climate change. “But now the students [who took this trip] can internalize that,” Key says. “They’ve seen it. For everyone else, it’s just numbers.”

“We knew we wanted to look at glaciers, glacial history, climate change,” Key explains. “So one of the guides was a glaciologist, and the other was a local expert and adventure man. We hiked hard and paddled hard and worked hard, and the students had such great attitudes. This kind of cooperative camping isn’t easy.”

It’s also not easy to sleep when the sun never sets.

“Drinking the glacier water … it was so crisp and clear and clean,” Campbell recalls. “We didn’t have to purify it. We just filled up our water bottles in a stream, and it was the best water I’ve ever had.”

The elusive unicorns of the sea stayed hidden the entire trip. As the team packed up their last camp and prepared for the trek home, they heard little puffs of air. They turned and saw a group of 50 to 100 (depending on whom you ask) narwhals filling up the water, as if to bid the group farewell. 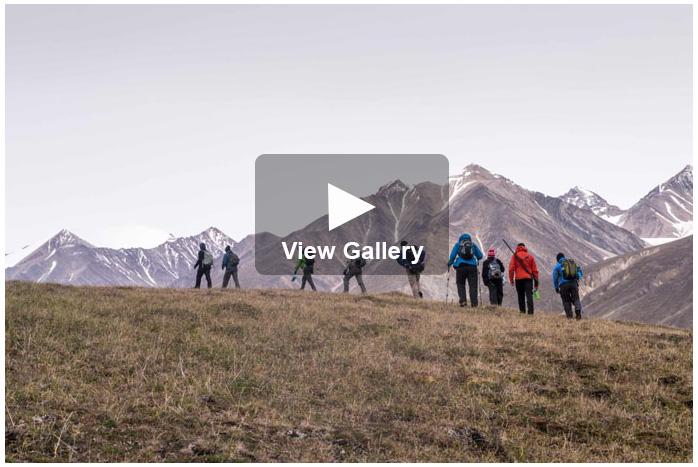