Discovering Silver Linings and Opportunities During the Remote Semester 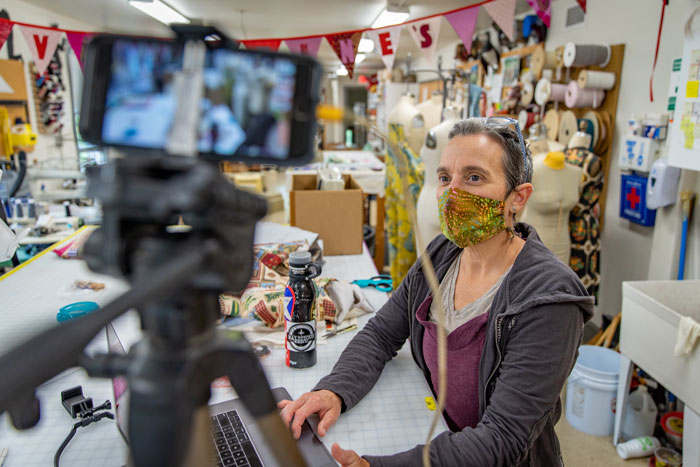 In the face of the pandemic, faculty members find new ways to bring the liberal arts alive to students living far from campus

It’s likely that all current Dickinson students will remember what they were doing when they got the email that said Dickinson—up against a wall of COVID-related obstacles—was going to be a remote experience in the fall. And many likely had the same question: How is this going to work out?

Over the past few months, we’ve found out. The Dickinson faculty has collectively made Herculean efforts to keep the academic machine well-oiled and running, and online learning is underway instead of being feared. And, maybe against all odds, it's working out better than anyone could have expected.

“Although I would be happier on campus, virtual learning has proved to be a resourceful alternative, given the difficult environment,” says Olivia Cox ’24 (undeclared), who’s taking Professor of Art History and William W. Edel Professor of Humanities Melinda Schlitt’s First-Year Seminar, Ideas That Have Shaped the World. “I’ve met more students through my classes than I originally believed I would, and I’m glad that I’m still working toward the same goals that I would have had on campus.”

Those goals are being reached through no small amount of creativity on the part of Dickinson’s faculty, who have pivoted hard into online teaching in some interesting ways. For instance, Professor of Biology Chuck Zwemer has created something akin to a TV studio for holding physiology labs virtually, while Professor of Theatre Sherry Harper-McCombs has been shipping sewing machines across the country so students in her Introduction to Stage Technology class can learn to sew at home. Meanwhile, Andrea Lieber, professor of religion and Sophia Ava Asbell Chair in Judaic Studies, has been “geeking out” using Jamboard, which allows creative real-time collaboration with students.

And students have been noticing those efforts, which sometimes meet them outside of the realm of virtual coursework.

“Professor [Scott] Boback has created a time and space for us as a class to hang out and not have to necessarily talk about ecology, which he calls ‘Ecology Virtual Coffee Hours,’ ” says Marja van Mierlo ’22 (art & art history), who’s taking Boback’s Biology 314: Ecology. “Although it’s in the morning, it’s worth waking up for. Additionally, in class, he has introduced us to his dog and the plants in his yard. Having these relatively small chats has made my remote experience in his class a lot more enjoyable.”

For Boback, associate professor of biology, it’s part of a holistic approach to teaching—taking into account what students need academically as well as socially.

“What we’re doing is taking the time to thoughtfully plan out exercises and activities students can do on their own, in a remote setting, while pushing them intellectually,” says Boback, who also has gone the extra mile in keeping students as stress-free as he can. “[The Virtual Coffee Hour] is a nice way to understand and learn about students’ unique situations, something we would normally do before or after class, perhaps when we bump into them in the hallway—something that’s much easier to do when we’re in person!”

Beyond pivoting to make the student experience as robust as possible in clearly challenging times, faculty members have found elements of online life that have added to, instead of subtracted from, academic life. For instance, Adrienne Su, professor of creative writing and Dickinson’s poet-in-residence, has been trading Zoom class visits with other poets around the country, bringing their classes together, mutually interviewing each other and inviting students to ask questions and request poems to be read.

“In addition to being interesting for us, I think it gave students a chance to see their visiting poet as a teacher and their teacher as a visiting poet,” says Su, who will trade sessions in October with a poet whose work she has admired. “Since most poets teach, it’s a more holistic way of envisioning a career in creative writing than the traditional visit provides.”

And that approach has also resonated with students, all of whom say they’d obviously rather be on campus this semester but have managed to find genuine positives in the current situation.

“The challenge of the liberal-arts education is that students want a personal experience of a small community and connection with peers and faculty, yet that’s incredibly difficult to do when we’re spread out throughout the world,” says Sara Soba ’21 (environmental science), also taking Biology 314. “But the fact that we can see how much the professors care about their students and the lengths they are willing to go to ensure they can teach their content well is honestly very inspiring.”

Erin Crawley-Woods, visiting assistant professor of dance, generally focuses on building awareness of and connection to self, others and environment through yoga, dance techniques and somatic modalities and improvisation—none of which is exactly conducive to online learning. But the fact that she’s been forced to rethink her approach might just have led to nuanced breakthroughs in her teaching style.

“There is truly no substitute for being in the same room together, and I've stopped trying to make it like there is and instead figure out what this new thing is,” she says, noting that teaching such a physical subject online is working out better than she expected it to. “Preparing to teach remotely forced me to reorganize a lot of material. I became much more aware of where things in my syllabi were unclear or how I had structured an assignment was inefficient. I'm more open to changing things up and feel like a more versatile educator.”

Hans Pfister, professor of physics and the George W. Pedlow Chair in Pedagogy, has also been changing things up. And while he says it’s about double the work of classroom teaching for himself and his science colleagues, it’s something he’s come to embrace.

“I'm still having a fantastic time, and I believe that my students have a great time as well,” he says, noting that in one class, students are exploring kinetic art, collecting data via video from thousands of miles away. “I can intrigue them and bend their minds with my physics puzzles in a Zoom class as much as during a class that would meet in Tome.”

In the end, students have had a lot of good things to say about the fall 2020 semester, such as Sydney Loewy ’24, in Schlitt’s FYS, who says, “Although [it’s] not ideal, I don’t feel like I’m lacking a quality education. Every professor that I currently have has adapted their classes to be more fitted to a virtual environment and has been accommodating to every student as well as they can.” And Madi McIntyre ’22 (biology, anthropology) agrees: “I have to say I am surprised how well remote learning is working as a science major.”

“Dickinson has done a much better job [than my high school] of implementing different learning techniques and making us feel like we’re actually in the classroom,” says Ben Tomick ’24. “Whether that’s breakout rooms, videos, open discussions or some other online interactive assignment, it works. I definitely feel like I’m learning now and am at school rather than just waking up and logging on to a mandatory meeting.”

But there are two sides to the remote-learning coin, of course. Students cite the lack of real social interactions and how much they miss fieldwork as major downsides of the remote semester. Some feel like they’re always on an academic schedule, finding it hard to break away and keep different facets of their lives separated. Then there’s the isolation of being a physical class of one, at their dining room tables and in their bedrooms. And don’t get anyone started on studying abroad.

Another issue exposed by the online semester—experienced from grade school to graduate school worldwide—is what could be called an unlevel playing field.

“Remote instruction has heightened faculty sensitivity to issues of inclusivity and equity among students,” says Neil Weissman, provost and dean of the college. “The online context reveals significant disparities in access, technology, study space and family circumstances that affect student performance—many of which are normally at least partially attenuated by the leveling effect of campus residence. But we are working to provide all students the support they need.”

So while everyone is striving to make the best of a challenging situation, and students and faculty have remained safe—thereby helping to keep the Carlisle community safe as well—all the Herculean efforts on Earth can't replace what Dickinson is at heart—an immersive, residential, tight-knit liberal-arts experience, as much community as classroom. But for now, there’s been a real silver lining to the dark clouds that got us all here.