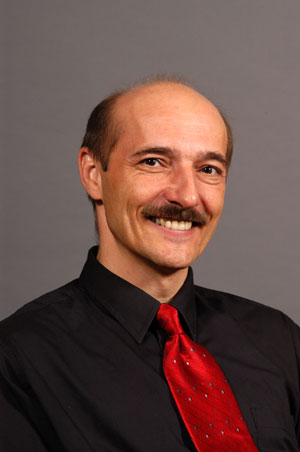 As an advocate for the environment he encourages sustainable living, supports sustainable technology, and embraces renewable energy sources. With the help of a 2006 Keystone Innovation Zone (KIZ) Seed/Assistance grant he was able to turn one of his visions, a sun-tracking solar concentrator, into a reality. This prototype will soon make some of the hot water for the students living in Dickinson’s Center for Sustainable Living. A 2009 Innovation Transfer Network (ITN)/KIZ Seed/Assistance grant enabled him to design and build a concentrating solar collector, which converts solar energy directly into electricity, using a thermoelectric converter (TEC). A 2007 ITN/KIZ grant supported the design and construction of a dental device, which removes temporary crowns and bridges by a series of micro pulses, applied to the backside of the dental appliances. Over the course of the semester he devotes time as a plasma physicist to work with senior physics majors on his design of a plasma propulsion device known as a Hall thruster. With another group of seniors he built a solar powered Stirling engine. Over the course of the past 18 years he has developed numerous kinesthetic physics experiments, incorporating his students into the experiment, thus allowing them to feel the forces and accelerations on their own body. Three of his inventions, a Kinesthetics Cart for Motion in 1-D, a Kinesthetics Cart for Motion in 2-D, and a Thermodynamic Engine and Ideal Gas Law Demonstration Apparatus are being used at over a thousand colleges, universities, and high schools. Some of his other interests include physics puzzles, tricks, and toys, as applied to the physics classroom.