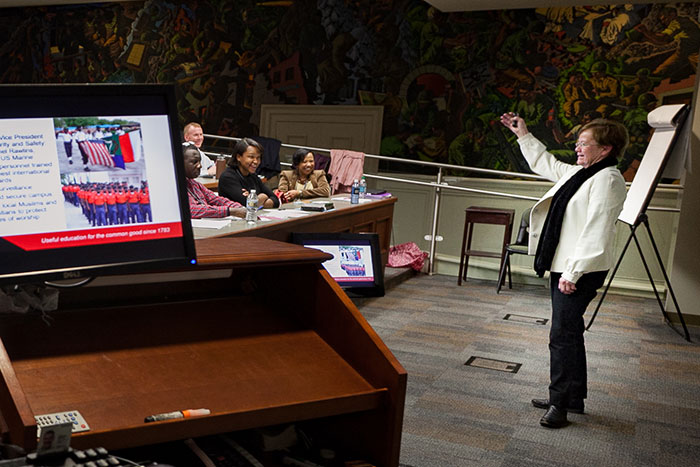 Professor of Earth Sciences Ben Edwards was quoted in a Newsweek article on Iceland’s sleeping volcanoes.

Associate Professor of Physics Lars English published There Is No Theory of Everything: A Physics Perspective on Emergence through Springer International Publishing. In addition, his paper, “Analysis and observation of moving domain fronts in a ring of coupled electronic self-oscillators” was published in Chaos: An Interdisciplinary Journal of Nonlinear Science, which is produced by the American Institute of Physics. Two of the paper’s co-authors are Kevin Skowronski ’17 and Chris Fritz ’17.

Professor of Theatre Sherry Harper-McCombs received an international travel grant from the United States Institute for Theatre Technology for a residency with Papermoon Puppets in Yogyakarta, Indonesia.

Student-faculty research led by Assistant Professor of Earth Science Jorden Hayes was featured in several news outlets, including The Sentinel, Main Line News, St. Joseph News-Press, Marietta Daily Journal, The Daily Collegian, Montgomery News and the Wellsboro Gazette. She and her team are conducting a field survey of burial grounds tied to the Mount Tabor AME Church in Mount Holly.

Professor of Psychology Marie Helweg-Larsen penned an opinion piece for The Conversation regarding Denmark's ranking as one of the happiest countries in the world. The piece was carried by more than 50 additional outlets, including Newsweek, Salon.com and the St. Louis Post-Dispatch. Helweg-Larsen also was a featured guest on WNHN-FM's The Attitude radio program.

Professor of Anthropology Ann Hill and Professor of Sociology and Director of the Community Studies Center Susan Rose ’77 earned a $35,000 grant from the ASIANetwork Student-Faculty Fellows Program, which will enable them to take six students to conduct research in a farming community in China.

Visiting International Scholar of International Studies Jacob Udo-Udo Jacob discussed the relationship between MLK and Malcom X in the CNN.com feature “Three Ways MLK Speaks to Our Time.” His comments also were featured in the Christian Science Monitor story “After Parkland, a New Generation Finds Its Voice,” and in an Associated Press story, “After Years of Dejection, Proponents of Gun Laws See Hope,” which ran in nearly 500 outlets, including The New York Times, Chicago Tribune, Atlanta Journal-Constitution, Denver Post and San Francisco Chronicle.

Helene K. Lee, assistant professor of sociology, published Between Foreign and Family through Rutgers University Press. The book explores the impact of inconsistent rules of ethnic inclusion and exclusion on the economic and social lives of Korean Americans and Korean Chinese living in Seoul.

Professor of Religion and Asbell Chair in Judaic Studies Andrea Lieber’s essay, “Experiential Education: An Approach. Not a Place,” was published in Jewish Philanthropy.

Assistant Professor of Political Science Katie Marchetti discussed the formation of interest groups and think tanks in an article that was picked up by the Associated Press and ran in U.S. News & World Report, Washington Times and several other newspapers. She also discussed the youth gun control movement and its advantage over the NRA in a CNN story, “Four Reasons the NRA Should Fear the Parkland Survivors.”

David O’Connell, assistant professor of political science, was quoted in the Christian Science Monitor story, “Why Presidential Language Matters.” He also was interviewed on FOX43 regarding the State of the Union address, Pennsylvania’s proposed congressional district map and redistricting and gerrymandering. He was a guest on WITF’s SmartTalk on Presidents Day discussing the legacy and popularity of U.S. presidents.

Professor of Creative Writing and Writer-in-Residence Susan Perabo’s essay, “Creating Fully Developed Fictional Characters (That Are Not Secretly You),” was published in The Writer magazine.

The Wall Street Journal published an op-ed, “In Collective Identities, We Both Lose and Find Ourselves,” by Associate Professor of Philosophy Crispin Sartwell. He also was a speaker at the Humanities Symposium at Vanier College in Montreal in February.

Associate Professor of American Studies Cotten Seiler was invited by The Guardian to write an op-ed on automobility. It was published on March 1. 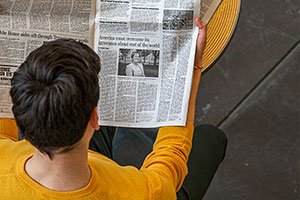 In addition to the continuation of her Useful Education for the Common Good Tour and ongoing campus initiatives, President Margee Ensign continued to make her voice heard in the media and made progress in several key areas of institutional focus.

The February cover story of NACUBO’s Business Officer Magazine highlighted Dickinson’s work with the Greater Carlisle Project and its implementation of the City Resilience Index. Neil Leary, director of the Center for Sustainability Education, was interviewed.

Vice President for Enrollment Management Stefanie Niles discussed Dickinson’s decision not to penalize applicants for participating in peaceful protests against gun violence. Her comments were featured in stories by The Atlantic, MarketWatch, the Pittsburgh Post-Gazette and WCPN, an NPR affiliate.

Provost Neil Weissman was mentioned in an article focusing on sustainability education in Diverse: Issues in Higher Education. Additionally, Lindsey Lyons, assistant director of the Center for Sustainability Education, was interviewed and quoted extensively in the piece.

Professor of Creative Writing Adrienne Su’s poem “Substitutions” recently earned a spot in the 2018 Best American Poetry anthology, marking the fourth time her work has been included in the series. Read more. 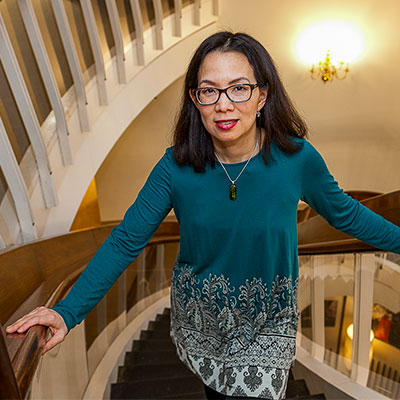