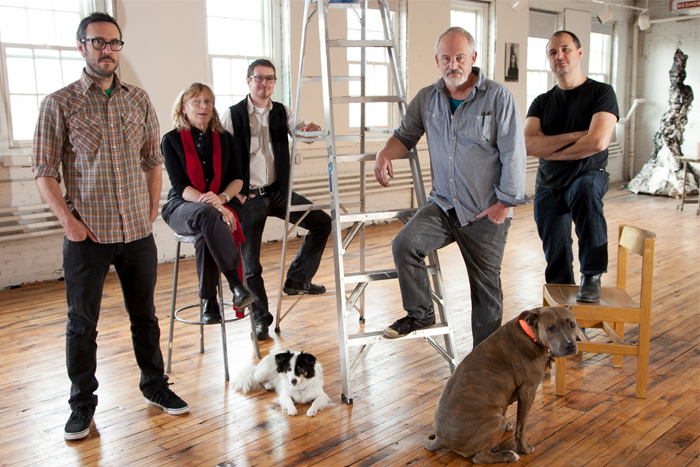 Studio-art faculty members work side-by-side in the Goodyear Building along with students, often creating stunning works of art for joint and solo exhibition. But those works are rarely shown on campus, much less in a joint exhibition with Dickinson colleagues, who—like those in faculty members’ worldwide professional spheres—both influence and respond to their work.

This year is the exception. Five faculty members, who more commonly exhibit in major U.S. and international cities, come together at The Trout Gallery Nov. 14 to launch the first Dickinson faculty exhibition in roughly a decade. Aptly titled Elsewhere, the show is a testament to the depth of the studio-art department’s collective talent and the diversity of its professors’ recent and ongoing work.

Todd Arsenault is a Dickinsonian in two respects—as associate professor of art (M.F.A., Rhode Island School of Design) and as a member of Dickinson’s class of 1999. His paintings, drawings and digital-media works are in collections at the Rhode Island School of Design Museum, the Artist Pension Trust (New York City) and the Art Gallery of New South Wales (Sydney, Australia), and he has exhibited in the U.S. and Canada. He teaches drawing and composition, printmaking and digital art.

Arsenault says he is particularly drawn to paint, not only because of the history and versatility of the medium but also because of the nature of the two-dimensional plane. “[2-D] can evoke the real, but it is ultimately its own space with its own reality,” he explains, pinpointing a dichotomy and otherworldliness that is echoed in his work.

By adding visual elements from other media sources, Arsenault explores the interplay between old and new and between traditional and technology-based mediums and experiences. The result, says Associate Professor of Art History Elizabeth Lee, is a collection that “challenges any easy understanding of painting, with works that move seamlessly across abstract, semi-figurative and text-based approaches … [and is] dense in its exploration of texture, color and form.”

Bale has taught at Dickinson since 2005 and has regularly exhibited since 2004, serving artistic residencies nationally and abroad. His photographs are part of the permanent collections of Caisse d'Epargne in Toulouse, France; at the Photomedia Center and Messiah College, both in Pennsylvania; and at the Savannah College of Art and Design in Georgia.

Bale recently was a member of the 2014 photo team for the Ese’Eja Cultural Mapping Project, supported by National Geographic's Genographic Legacy Fund, which aims to enable members of an indigenous Peruvian society to reclaim ancestral lands.

Photos from this project are included in Elsewhere, side-by-side with landscapes and architectural studies. As Brenton Good, assistant professor of art at Messiah College, notes, it’s difficult, given this vast range of subjects, to identify a “typical Andrew Bale photograph,” though there are unifying factors. “The most obvious is the technical wizardry, a Modernist attention to the well-crafted image … [and] a genuine honesty,” Good writes in the exhibition catalogue. “Bale is making appealing images for everyone, not printing photographs for an insider art community.”

Whimsy/darkness, childhood/parenthood, prefab/hand-crafted, memory/experience, familiar/bizarre, complete/in flux. These are some of the polar forces behind Anthony Cervino’s recent works. A graduate of the University of North Carolina (B.F.A.) and Towson University (M.F.A.), Cervino served as acting director of college exhibitions and adjunct professor at Corcoran College of Art + Design before coming to Dickinson in 2006. He has exhibited throughout the East Coast, in the Midwest and in Norway, and he served two residencies at the Kunstnarhuset Messen art center in Alvik, Norway.

As associate professor of studio art, Cervino teaches sculpture, public and sustainable art, 3-D design and the history of art and architecture and is currently preparing a solo exhibition at Flashpoint Gallery (Washington, D.C.). His Elsewhere pieces include recent small-scale, painted sculptures that take on the kitschy aesthetic of antique figurines, as well as paintings, sculptures and installations. Some works incorporate found objects, some appear to be mass-produced but are, in fact, painstakingly hand-crafted.

Together, writes art critic Kriston Capps, Cervino’s pieces reveal both the artist’s evolving processes and the mind behind them; there’s often a happy, childlike surface vibe and an edgy undercurrent, signifying dual roles and a complex psychological framework at play. Cervino’s concrete balloon-like figure, for example, could be sticking its tongue out in a playful gesture, or could be choking, Capps writes. (Or, just as likely, both.)

Professor of Art Ward Davenny (B.F.A., San Francisco Art Institute; M.F.A., Yale University) most often trains his expert eye on the landscape. A recipient of two National Endowment for the Arts fellowships as well as grants from the Pennsylvania Council for the Arts and Mid-Atlantic Council for the Arts, Davenny has taught at the University of Connecticut and the University of Hawaii and has been a part of the Dickinson community since 1992. His works are included in permanent collections at the National Gallery of Art (Washington, D.C.), the British Museum (London) and Harvard University’s Fogg Museum (Cambridge), among others, and he has taught drawing, printmaking and painting at Dickinson since 1999.

Davenny taps a lifelong fascination with extreme weather in his newest works—an interest he first indulged in the late 1990s, when he began to accompany the Center for Severe Weather Research’s Joshua Wurman on storm-chasing expeditions, bringing a former student—now colleague, Arsenault—along to assist.

Years later, Davenny explores the ways in which the ever-shifting skies affect the people and the landscapes on the earth below, and he captures these evolving states in moody charcoal, paints and photographs. As he puts it, “The sky is what changes things. Everything else takes too long.”

Beauty meets quasi-function in the works of Charles A. Dana Professor of Art Barbara Diduk, a potter who draws from the worlds of sculpture, history, drawing and painting to create dynamic works that push the boundaries of her medium.

Diduk, who has taught at Dickinson since 1980, earned a B.A. at the College of William and Mary, a diploma from the Surrey Institute of Art and Design (U.K.) and an M.F.A. from the University of Minnesota. She has exhibited in China, the Netherlands, South Korea and Spain and across the U.S.; her most recent solo exhibition (Museum of Fine Arts, Boston) characteristically marries traditional vessel artistry with modernist sensibility and design.

Diduk’s contributions to Elsewhere include an installation of elongated, black-and-white forms; a selection of signature red, spherical works; and black, hanging pieces reminiscent of hand tools. She also is showing porcelain pieces completed during her stays in the potting community in Jingdezhen, China, the home city of ceramicist Weina Feng, who will serve a residency at Dickinson next spring.

Unglazed and painted with intricate surface patterns, Diduk’s vessels look more like stonework sculptures than traditional porcelain vases. Her approach is similarly left of center. “The process is pretty improvisational—comparable to a musician scatting or jamming,” Diduk says. “The sound builds and composition comes out of it, and I’m not necessarily thinking of content. Just like painters might work in a color field, the content is embedded in the composition.”

Bringing it all home

The show’s curator, Director of the Trout Gallery and Associate Professor of Art & Art History Phillip Earenfight, notes that the exhibition contributes significantly to the academic community at Dickinson and fosters “an environment of exchange … among the artists, their colleagues, students, critics, collectors and many others.” It also signifies a departure from similar showings at most academic institutions, where faculty works are displayed in solo shows, in tandem with student exhibitions or in more informal settings. Elsewhere, in contrast, is more than the sum of five vital solo careers; like the elegant, full-color exhibition catalogue that accompanies it, Elsewhere showcases the creative community on campus of which each artist is part.

Whether separately or together, these works defy easy categorization, adds Lee. And that is just as well. “The dynamic mix exhibited here is what makes the work of these artists—and Dickinson’s studio art program—so creative, engaging and rich,” she says.

It's an inspiring place for faculty and students alike, notes Diduk. “Our students tend to see us in the classroom as teachers only,” she says. “This exhibition will allow them to see that we also have creative lives. And they’ll be able to see that we are out there, creating—that we are doing precisely what we ask them to do every day.” 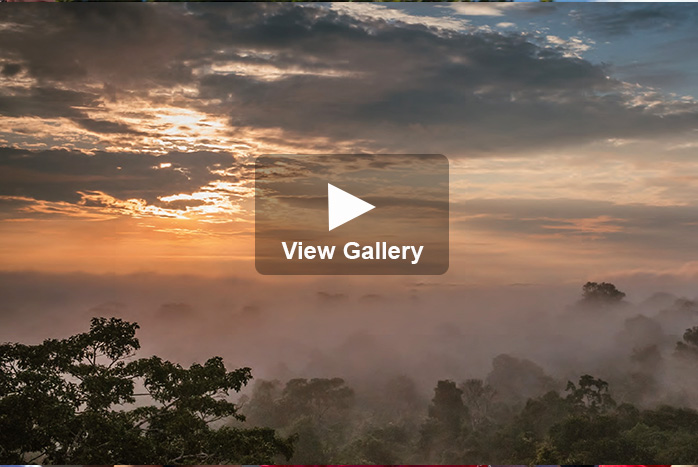