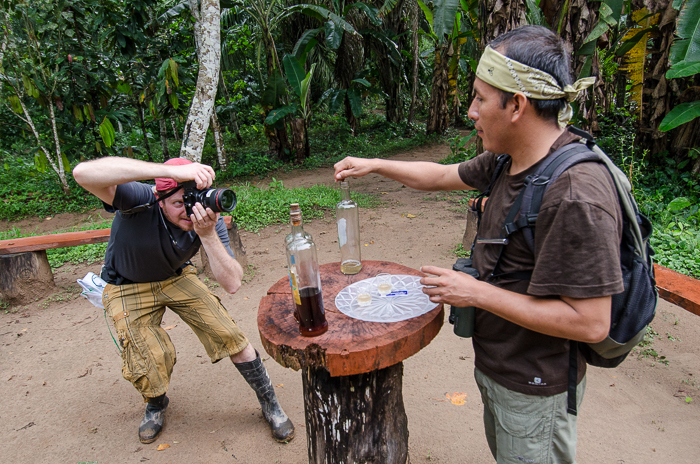 Andrew Bale, seen here photographing traditional medicines at Ñape Botanical Garden, a medicinal garden set up in 1986. Indigenous people visit this spot in search of traditional remedies for everything from a sore throat to cancer. Photo by Jon Cox, University of Delaware.

by Ben West '14. Photos and captions by Andrew Bale.

They climbed down from the sky in the rain forest, descending sturdy cotton ropes onto sacred ground. But for the Ese'Eja (EH-see-AY-ha), a hunter-gatherer-fisher group in southwestern Peru, the moorings to their past and their culture are in some cases taut or breaking. As part of their effort to hold onto their history, way of life and ancestral lands, photographer Andrew Bale journeyed to Peru's remote jungles this summer to capture images for a National Geographic-funded project to map the Ese'Eja's culture.

The project, staffed by videographers, photographers, anthropologists and botanists, aims to enable Ese'Eja society to reclaim ancestral lands from the Peruvian government. That achievement would allow a people that derives so much of its economy and spirituality from the forest to sustain their livelihood into the future.

Bale’s portraits of daily life, handmade objects and individuals will be featured in an upcoming book sponsored by National Geographic’s Genographic Legacy Fund. Sales of the book, set to be published in both English and Spanish in 2015, will support initiatives for better access to health care, education and legal grappling to secure the Ese'Eja's ancestral lands.

The Genographic Legacy Fund seeks to preserve and support the heritage of indigenous populations worldwide. Its initiatives are active throughout East Asia, the Americas, Australia and Polynesia. Support also flowed from additional sources in Peru and the University of Delaware, the Greater Philadelphia Latin American Studies Consortium and the ACEER Foundation.

Bale, lecturer in art and art history, brought his experiences in fine art and commercial photography to the Ese'Eja villages. The project’s participants are receiving direction and final approval from the community on what content is included in the book and other materials.

“They are the driving force in saying what they would like to see happen,” Bale says. The Ese'Eja communities recently united under a new leadership arrangement and will benefit not only from the publicity generated from the book, but also from the documentation and curation of their cultural practices.

For Bale, the collaborative project with the Ese'Eja peoples means preserving “what their stories are, what their legends are, what they believe in." The images he makes, in addition to physical artifacts like handmade paddles and jaguar teeth necklaces that the group collected during its trip, will be exhibited in the United States. Eventually, the project will return those pieces to Ese'Eja villages, allowing the community itself to strengthen and preserve its link with its past. 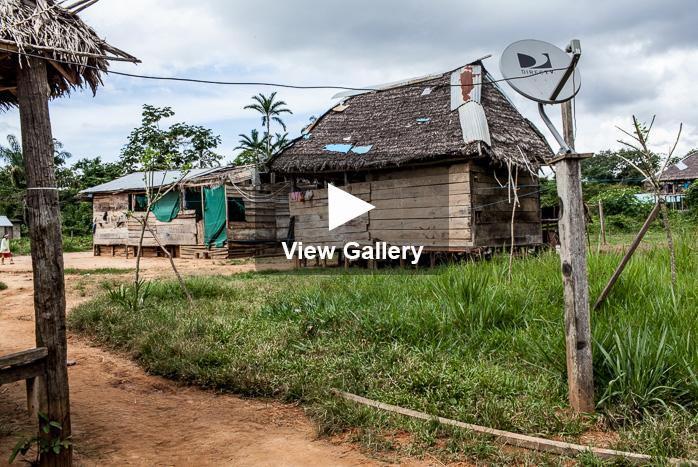 View a video about the project