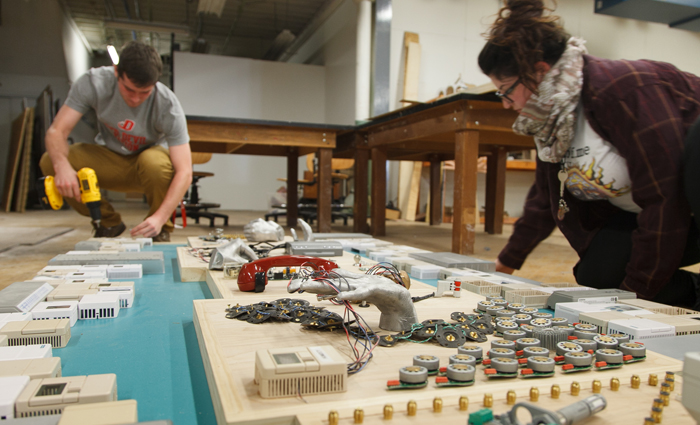 Students in Associate Professor of Studio Art Anthony Cervino's art and sustainability course create a commissioned work that will be hung in the headquarters of a major manufacturer. The piece uses a factory line as inspiration and incorporates repurposed items culled from the factory floor. Photo by Carl Socolow '77.

More than a thousand engineers and business professionals will take daily inspiration from a new student artwork about the intersections of business, manufacture and sustainability.

The 20-foot-long wall relief sculpture was commissioned by Siemens Building Technologies, a division of Siemens, a global electronics and electrical-engineering corporation that creates energy-efficient  building infrastructures and systems for use at colleges across the U.S., including Dickinson. Created by students in Associate Professor of Studio Art Anthony Cervino’s Sustainable Practices in Public Art course, the artwork  incorporates repurposed materials culled from a Siemens factory floor. It will be installed inside the main entrance of the company’s American headquarters, north of Chicago.

“This is the first time we’ve partnered with a college or university on a project of this scale,” said Ari Kobb ’85, who leads Siemens’ sustainability efforts in the U.S.  "And because of our longstanding relationship with Dickinson—and Dickinson’s emphasis on sustainability education as part of the curriculum—it seemed a natural fit."

“We had a lot of conversations about it as a group,” says Alex Motiuk ’14, an international-business & management major, “and in the end, we took inspiration from the assembly line and from cubicles. We wanted to show all of the individual tasks it takes to create each new product.”

Each student designed and created one of 12 interlocking panels, using non-recyclable materials that had been sent, in several large shipments, to Goodyear Studios. Digging through the boxes, the students scavenged for eye-catching pieces, like a land-line phone receiver or a fire-alarm pull, and mined the guts of ancient computers and electronics for circuit boards and bolts—anything that would add interest and texture to the finished piece—and affixed them to their panels as they wished.

Each student also used dental alginate to make aluminum castings of his or her hands—a multistep, multiperson process—which they each affixed to their own panels, along with the factory materials. “We included the hands because we wanted to show the people behind the process,” explained biology major Hattie Cowles '16. “It's really about social sustainability.”

The wall relief is only one of three major assignments in this course; each student also constructed two items out of recycled wood pallets and designed a sustainability-themed sculpture that could be displayed on campus.

Along the way, they learned how to see a creative project through from concept to completion, create a scale model and write a project proposal for a work of public art that takes into account practical factors, such as weather resistance and kid-friendliness, as well as the work's ideological fit with its proposed space. They also picked up simple woodworking and fix-it skills; environmental-studies major David Bertram ’16 took that hands-on training a step further when he learned to weld so he could make his own hammer.

“I think we all learned how gratifying it is to work with your hands,” said Jenna Rose Forte ’16, an English major.  “It was empowering to see what we made.”

Matthew Bracy ’14 enjoyed the chance to gain different perspectives from students with different majors. “It’s been fascinating to me as an international-business major, because we talked about issues I’ve talked about in business classes, but in a whole different way,” he noted.

That's music to Kobb's ears, both as a sustainability professional and as an alumnus. "I love the fact that the college recognizes the importance of sustainability not only from an environmental standpoint but from an educational standpoint, because it's something everyone should know about, and they can approach it from different angles," said Kobb, noting that he studied political science and Spanish at Dickinson and worked in global marketing before being named director of sustainability at Siemens. "I'm living proof of that."