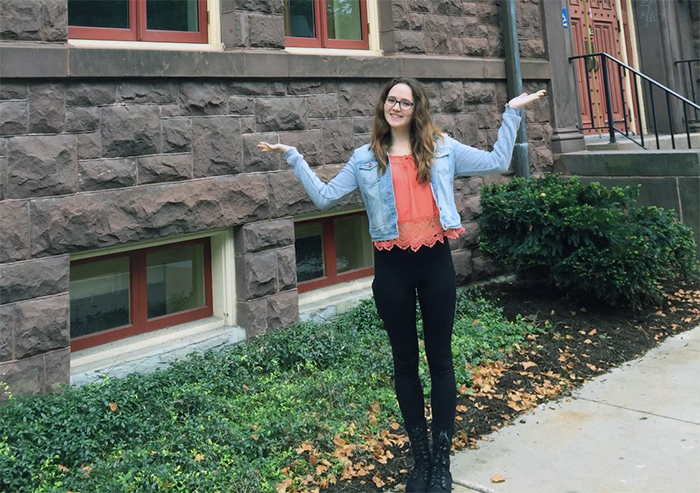 Even before arriving at Dickinson, Erin Lowe ’22 (philosophy, political science) was focused on making a difference in the world through public service. Now, she's studying the world’s challenges and learning how to respond to them in new ways. Below, she discusses the moment she discovered the power of storytelling, the classes and extracurricular experiences that have made the biggest difference in her Dickinson life so far and more.

The Name of the Wind by Patrick Rothfuss.

I was attracted to Dickinson’s international focus. Coming from the Midwest, learning about new perspectives was incredibly important to me. The significant number of students who study abroad at Dickinson, the languages offered and the focus on global perspectives inside and outside of the classroom are all reasons why I chose Dickinson.

The Quarry on a rainy day.

The Legislative Process was one of my favorite classes, because Assistant Professor of Political Science David O’Connell consistently brought the most positive energy I have ever seen at 9 a.m. I loved learning about Congress, but this class was particularly exciting because we dove into many of the intricacies associated with congressional elections and proceedings. It may not sound too exhilarating, but it really was. It allowed me to apply many of the theoretical concepts I have studied in philosophy courses to the practical elements of the political world.

When I first came to Dickinson, I knew I was likely going to major in political science, as I grew up organizing protests and participating in Youth and Government, Model U.N. and the Conference on National Affairs. I wanted to learn more about the political world in order to prepare myself to make a difference.

Philosophy came as somewhat of a surprise to me, although in retrospect it should have been obvious. I took Introduction to Ethics with Associate Professor of Philosophy Jim Sias, and I was immediately preoccupied by the vastness of questions without answers. I started attending meetings for the Philosophy Collective, and I realized that the kind of conversations we were having were exactly what I wanted to gain from my collegiate experience. I wanted to ask about what matters and why. I thought that doing so could help me gain a better understanding of the world and our place within it.

I fell in love with the people on day one. Although there are many wonderful people on campus, the Dickinson Infernos are like a family. We all share a love for music that extends into deep friendship, and the best part of my day is singing with them or running into a fellow ‘fern around campus.

Beyond this group, Dickinson students as a whole are an inspiring bunch. Rarely have I encountered such passion and drive to engage deeply in an academic setting. I’ve witnessed it inside the classroom in the form of intense debates and discussions, but I’ve also seen it manifested in protests and in conversations with administrators. Dickinson students stand up for what they believe in, and at the end of the day, we will stand for each other.

I grew up competing in National History Day. It was essentially a yearlong research project that culminated in a one-woman performance. I competed for three years, and my junior year of high school I was fortunate enough to place first at nationals. But the reason it’s my proudest accomplishment is because a woman came up to me after one of my performances and thanked me for telling her story. It was the first moment I realized the impact storytelling can have. When I forget what I am working toward, I remember that moment and remind myself of what is truly important.

I intend to go into public service. This might take the form of politics, advocacy or nonprofit work. Regardless of where I end up, I hope to use the skills I have learned at Dickinson to make my community better.

I often remind myself that nothing is promised. I think it’s important to put day-to-day challenges into perspective. I cannot control what tomorrow will bring, but I can control what I do today and do my best to prepare myself for whatever may come. Our current moment feels unprecedented, and it requires us to adapt in ways we may not have anticipated, but it’s also a part of life. It is so easy to get caught up in our daily routines and forget how incredible it is to even exist. We are so lucky. As we move forward, I hope that is something we continue to remember.