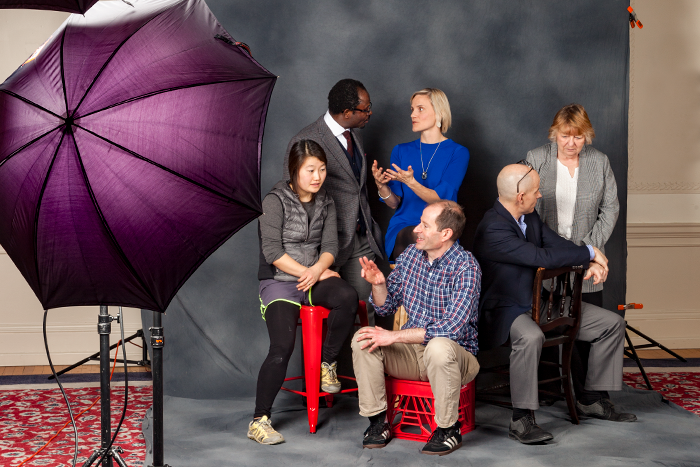 Dickinson has more than 200 faculty members who are experts in countless fields, from Greek mythology to cybersecurity, mathematical theory to social media movements. And these academics don’t just teach—they research, inspire, create, mentor, challenge, innovate. They turn ideas into action. They bring students in on that action. They turn that action into published work, works of art, new courses, new areas of inquiry. Meet six of these scholars, and discover what they’ve been up to this year. 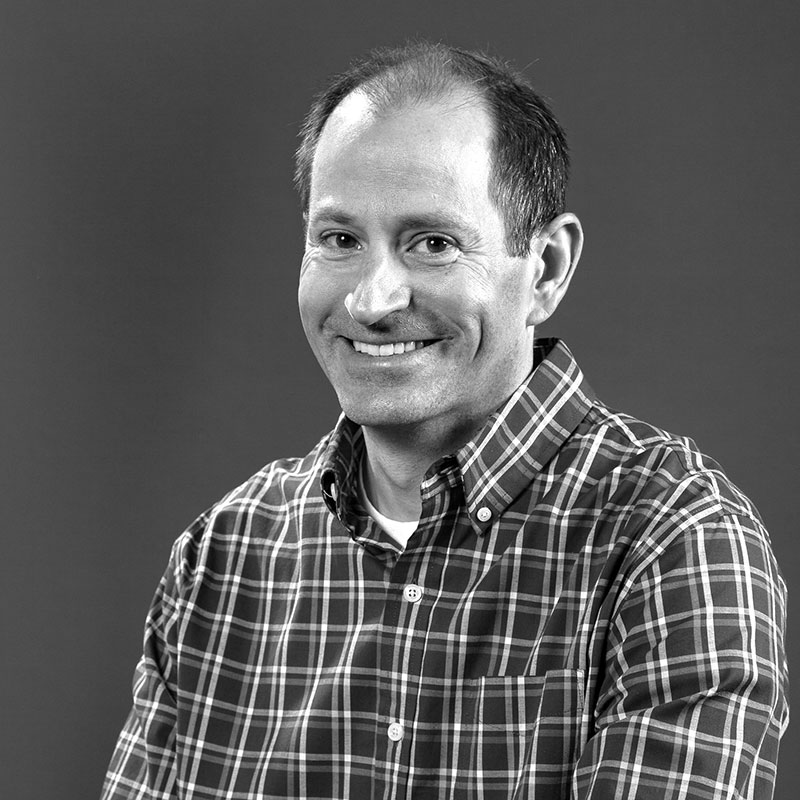 “As the nation struggles with the growing gap between rich and poor, public policies should help to ensure that it’s not only the affluent who get to enroll in high-scoring public schools,” says Forrester, noting that studies have shown that the average low-income student attends a school that scores at the 42nd percentile on state exams, while the average middle/high-income student’s school scores at the 61st percentile. “Our techniques not only accomplish the economic integration but do so while taking into account the distance students have to travel.”

Since districts populate schools with students who live nearby, Forrester and the Furman team wrote an algorithm that mitigated the issue of travel time while balancing schools’ populations based on socioeconomic status instead of proximity.

And it worked: Using 14 high schools in Greenville, South Carolina (home of Furman), as a test case, the new mathematical methodology assigned students to schools across the district so that socioeconomic variation between the schools was minimized, as was the total busing distance.

“This research is meant to help those in charge of making decisions about school zoning—often a highly charged topic of debate—see how they can incorporate socioeconomic balance into their decisions,” says Bouzarth. 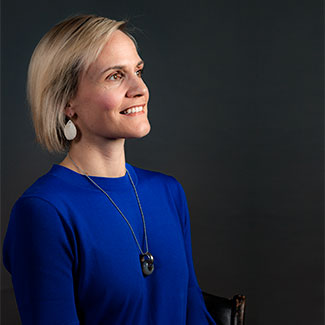 The Power of Print:
Claire Seiler

As Associate Professor of English Claire Seiler was developing her fall 2017 course Celtic Revival/Harlem Renaissance, she realized something was missing.

“I wanted to look at how the Harlem Renaissance, or the New Negro movement, as it was more often called, took shape—and took shape in print,” Seiler says, noting that this artistic and intellectual movement of the 1920s involved visual art, musical theatre and music as well as literature, social commentary and legal advocacy.

So she reached out to College Archivist Jim Gerencser ’93 and Special Collections Librarian Malinda Triller Doran. With Seiler’s wish list in hand, they facilitated the collection of a vast array of archival materials relating to that period, including rare periodicals and first editions of monographs and anthologies by African-American writers and intellectuals.

“This new collection animates the movement for students, so I overhauled my whole syllabus to prioritize print culture and material history,” Seiler explains.

“Being able to read and handle archival material that spoke about the failures of the Constitution allowed me to invoke what I have learned in the policy studies and English departments in a close reading analysis,” says Michaela Zanis ’19, who explored how the Sixth and 14th amendments should have better protected the African-American community.

Seiler also shared the collection of archival materials, which was funded by the Goodyear Endowment, established by Mary Goodyear ’28, with Dickinson alumni during a presentation at Homecoming & Family Weekend.

“Alumni and families were so glad to hear that we were investing in these materials and teaching with them, and parents were amazed at the objects their kids get to work with in their classes,” Seiler says. The experience led her to plan another session during the upcoming Alumni Weekend.

Seiler is looking forward to pursuing more in-depth research of the Harlem Renaissance herself, once she wraps up her current book project on the literary and cultural history of the early postwar period. 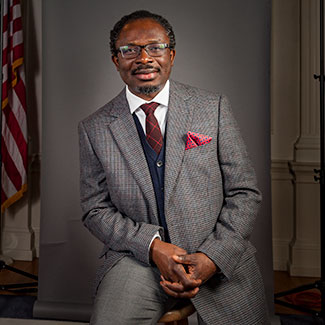 Jacob Udo-Udo Jacob got interested in the power of media when, during his junior year in college, he was appointed to head his campus radio station. That was around the time he learned about the role of Radio Télévision Libre des Milles Collines in the Rwandan genocide.

Today, his teaching and research interests lie at the intersection of communications and peace building, conflict and change. Following conversations with President Margee Ensign, a former colleague at the American University of Nigeria, Jacob came to Dickinson as a visiting international scholar in international relations. He has pursued his passions on campus, teaching a class on social movement theory and action, and beyond, as a visiting scholar at New York University’s Center on International Cooperation (CIC).

During his fall 2017 course Social Movements, Social Media and Global Change, Jacob worked to develop “more civic-minded students with a sense of compassion and civic responsibility and with the communication tools and confidence to challenge bigotry and extremism.” This semester, he is teaching a course on the media in war and peace, centered on the question of the media’s changing role from simple observers of war to participants influencing the way wars are fought.

Perfectly complementing this work at Dickinson is Jacob’s research with the CIC on countering violent extremism. He was invited to contribute to a think tank and has since helped develop “a more nuanced understanding of the role of religious identity in radicalization, terror recruitments, violent extremism and terrorism,” in turn contributing to current and emerging debates and international projects on the issue. Jacob is now working on a book on the use of radio for education and peace building in areas of limited statehood, in collaboration with Ensign, based on lessons and research from their USAID-funded project in northeast Nigeria.

Alongside his presence in academia, Jacob has a history of activism himself, particularly as a graduate student in the U.K. in 2005, including “organizing unfair basketball games featuring tall and gifted players against short players to draw attention to World Trade Organization policies that give unfair advantage to rich countries” and sitting with homeless people during the winter to draw attention to the fact that millions of people around the world have no place to call home.

“To see academe as separate from activism is to regard intellectualism as some sort of sidekick,” he says. 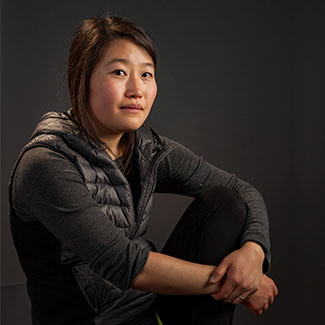 A mass of clay is sticky and formless, but in Assistant Professor of Art & Art History Rachel Eng’s hands, it becomes orchid-delicate or concrete-durable; gnarled as a barnacle or sleek as an eel. The ceramicist brings a fresh perspective to Dickinson in her first year as a full-time faculty member.

Eng often incorporates nontraditional materials—like plastic, in a work about sustainability, or flickering lights, in a piece suggesting firefly-like synchronicity. During a monthlong summer residency in Iceland funded by the National Council on Education for the Ceramic Arts, she visited a once-booming fishing town and made small pieces on-site, using clay scooped up from the beach. Her work highlights the otherworldly beauty of small elements—a grain of sand, a drop of water, a single protester—that combine to create intricate patterns and systems.

“The units might seem insignificant on their own, but when they’re part of a whole picture they create something more monumental,” she says.

Eng and husband Mitch Shiles came to Dickinson from Boston, where she taught in community studios for two years after teaching a semester at Colorado State. Eng is teaching three ceramics courses this spring and, like her predecessor, the late Barbara Diduk, who retired in 2017 after 37 influential years at Dickinson, works closely alongside students in the Goodyear Studio.

“You need to be in the studio for stretches of time,” she says, noting that because of this, ceramicists tend to get to know each other well. “Everyone shares tips and advice—it’s a community atmosphere.” Sometimes, when a student achieves an unintended effect or questions a common practice, she’s inspired to see her own work anew.

An exhibition of Eng’s recent work hangs in The Trout Gallery, and she’s busy creating a large-scale, forestlike commissioned installation to be shown in the Woskob Family Gallery in State College next fall.

“It’ll be like walking into a different world,” she says. 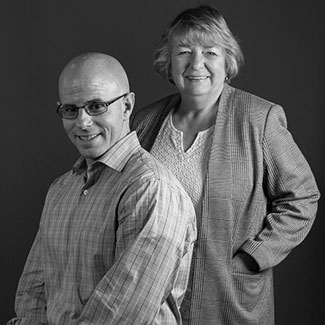 As they swept through the brand-new bulk-food grocery store, the students took copious notes. How long did it take to find common items? Was the entrance clearly marked? Later, they drew up recommendations and presented them to the business owners. They were among the 120 students who enrolled in Dickinson’s fall 2017 Fundamentals of Business course. Instead of developing proposals for fictional businesses, they studied real-life scenarios in real time, moving from students to student advisors, even as new business students.

International Business & Management Lecturer Steve Riccio and IB&M Visiting Instructor Sherry Ritchey had partnered with Small Business Development Centers at Kutztown and Shippensburg universities to connect each of their intro classes with a new or emerging small business in Cumberland County. Some classes maximized generational savvy by including social-media marketing strategies in their proposals and identifying software and apps to streamline operations. Others, such as those advising the grocery store, took an old-school approach. They recommended improved signage, adjusted shelving, in-person shopper polls and snail-mailed coupons.

“The best part was to see [the business owner’s] excitement in all of the new ideas we had come up with,” said Jess Goldberg ’18 (chemistry), who helped evaluate a CrossFit gym.

Many of these suggestions, including recommendations to improve the grocery store signage, were put into effect immediately. One semester later, Riccio and Ritchey continue to bring students into the outside world and the outside world into their classrooms.

Twelve students in Riccio’s spring human-resources class met with professionals in Copenhagen, Denmark, and Bremen, Germany, during winter break—a trip that included a visit to the largest Mercedez-Benz plant in the world. This semester, they’re continuing their study of global business practices as they visit American businesses.

Two of Ritchey’s Fundamentals of Business classes continue to work with the small businesses they advised last fall. And students in her spring class Social Impact Through Communication and Storytelling are working with the Carlisle United Way to promote local 100th-anniversary celebrations, with the commissioner for Latino Affairs and Latino Connection to promote a statewide Latino Health Summit and with the College Farm to generate marketing ideas for the farm’s new soap products.