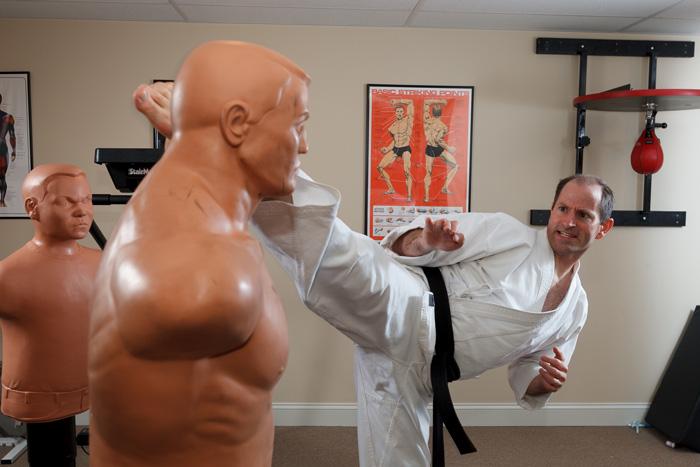 What should one make of Associate Professor of Mathematics Dick Forrester? He's an operations-research (OR) maven who was held back in third grade mainly because of math, a fifth-degree black belt (see video below) who had his hips replaced at the age of 40 and a fifth-degree Superman hater who has an absurdly large collection of figurines inspired by movies, TV shows and video games.

On this last point, he makes a correction: “Technically they're called adult action figures.”

Years ago he started collecting the figures but hid them away at the back of a shelf in his office. Then one day he decided to embrace the hobby and slide the figures out into view. Now he has more than 100 in his Tome office, and he’s added to them such prop replicas as The Twilight Zone’s Talky Tina and the Mystic Seer, the Book of the Dead from The Mummy and the creepy book from The Babadook. 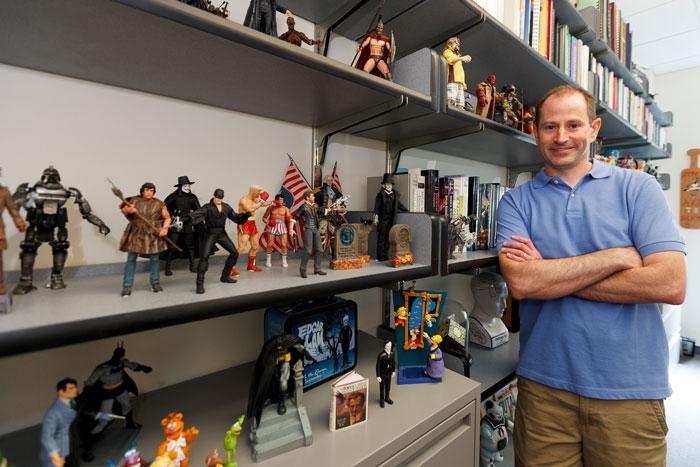 Students in for office hours might have a hard time not getting distracted by Associate Professor of Mathematics Dick Forrester's collection of action figures and movie prop replicas. Photo by Carl Socolow '77.

But there’s one figure you’ll never see in Forrester’s office.

“I despise Superman in every way, shape and form,” he says. “He’s completely invincible, with every superpower you could imagine. How is that any fun?”

No one else is invincible

Even as a fifth-degree black belt in Chidokwan—a blended style of karate that combines traditional and modern techniques—Forrester himself isn’t invincible. He got into the martial arts when he was 12 and during his formative years trained up to five hours a day. During one training session in high school, though, he was sparring with a college student and walked into a fist to the chest.

“It cracked my sternum, and my dad had to drive me to the hospital,” he says, beginning a story that soon sounds like something from a slapstick comedy. “I vividly remember sitting in the car, and I couldn't breathe, and it's a horrible feeling, and then a deer ran into us—jumped up and hit the passenger-side door. And when we got to the hospital I opened the door and deer fur was flying in the air.”

Years later, Forrester found himself face to face with something once again that reminded him of his mortality: Two weeks before he turned 40, he was diagnosed with early onset arthritis in both hips.

“It was devastating,” he says, noting that after traditional hip replacements, patients generally can’t run, jump or do anything involving impact. “Not only was I worried that I wouldn't be able to train in the martial arts anymore; I was afraid I was going to be in wheelchair by the time I retired.” 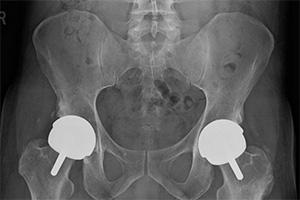 For readers wondering what a hip resurfacing looks like, with three pounds of metal installed, here's Forrester's post-surgery x-ray.

Using his statistical literacy skills to weigh the risks and benefits of different options, Forrester decided to undergo a somewhat controversial procedure called hip resurfacing at the Cleveland Clinic, one of the top rated orthopedic hospitals in the country. And now—three years later, with three pounds of metal in his hips—he’s back to practicing the martial arts with no restrictions (the above video was shot in Forrester’s basement karate den about a year after his surgery). And he’s back in the classroom as well.

“I like getting people excited about math, conveying difficult concepts in a way so that people who don't even consider themselves good at math can understand it," he says. "I think I'm good at it because I used to struggle with math and have a good idea of where people get tripped up.” (And speaking of difficult concepts, his article “Tightening Concise Linear Reformulations of 0-1 Cubic Programs” will be published in the journal Optimization.)

If he wasn’t leading students through the intricacies of mathematics—with a focus on OR, a complex branch of decision science—Forrester says, predictably, he’d probably be a full-time martial arts instructor. At Dickinson, he founded the Martial Arts Club (formerly known as the Chidokwan Karate Club) in 2002 and has been the head instructor and advisor since its inception. The club was awarded the Best Student Organization Award back in 2007 and currently has more than 50 members.

Though martial arts and math may seem worlds apart, for Forrester, they're linked by a common thread. And it’s something he impresses upon his students in both realms.

“In karate, discipline is one of the most important aspects, and the biggest problem people have in math is that they give up too quickly,” he says. “So I learned discipline in the martial arts, and that carries over into mathematics in a big way.”