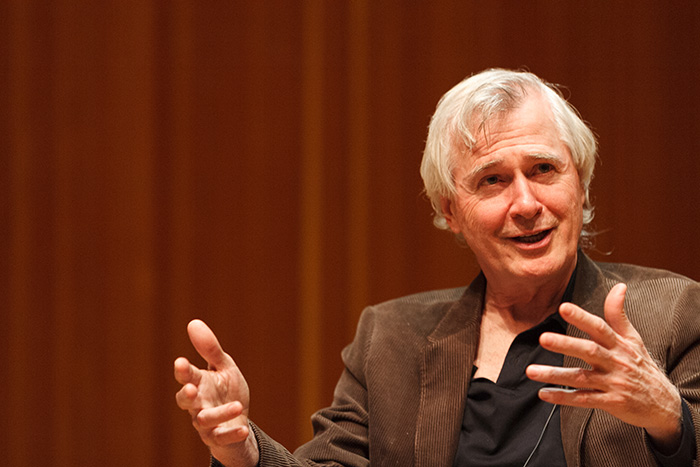 When John Patrick Shanley was 10 years old, he wrote a short story about an obstacle lodged in his throat that prevented him from speaking. It was a powerful theme, and one the young writer would revisit many times in his work. But it would be decades before he would discover the power of his own true voice.

One of America's foremost playwrights, Shanley came to campus to serve a residency as the 2016-17 Stellfox Distinguished Writer. Speaking with students in writing and theatre classes, he recalled his long artistic journey and offered advice and inspiration to students exploring similar paths. “He’s a true artistic leader of our day,” said Sarah Zimmer ’17 (theatre arts, history), who became a fan after reading Shanley’s works as part of a theatre class, “and we’re honored to have such a prominent artist sharing his experiences with us.”

The youngest of five children, Shanley grew up in the Bronx, N.Y., the son of an immigrant meatpacker, and attended Catholic schools. He served stateside as a Marine during the Vietnam War and discovered his passion for theatre while studying playwriting at New York University. He wrote several off-Broadway plays before creating his best-known work, Doubt, a 2005 Broadway production inspired by a relative's experience with a priest who was convicted of child molestation.

The play won four Tony awards, a Drama Desk award and the Pulitzer Prize. Other theatrical works include the critically acclaimed Outside Mullingar, The Prodigal Son, and Danny and the Deep Blue Sea. Shanley is also a screenwriter with nine films to his credit, most notably, the 2008 film adaptation of Doubt, starring Meryl Streep and Philip Seymour Hoffman, which he directed; and the 1987 film Moonstruck (Cher, Nicholas Cage), which won three Academy Awards, including best screenplay, and the Writers Guild of America’s 2009 Lifetime Achievement In Writing. His other screenplays include Five Corners (special jury prize, Barcelona Film Festival); Alive; Joe Versus the Volcano, which he directed; and Live From Baghdad (Emmy nomination).

As the 2016 visiting writer, Shanley visited theatre and screenwriting classes, worked with students in a first-year seminar on censored plays and lunched with students in an advanced directing course. He also delivered a public address, an informal Q&A and a book-signing. 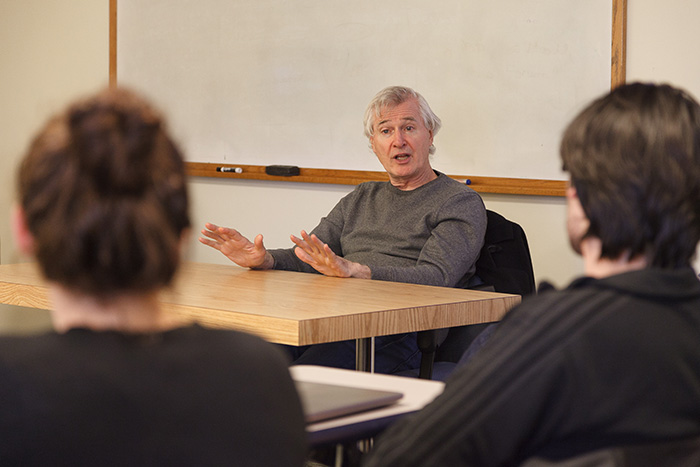 Asked to comment on the 2016 presidential election during a Sunday-night event, Shanley elicited applause when he joked that people on both sides of the divide would do well to “sit down together and read ‘Goodnight Moon.’ ” During a Monday-night discussion, the award-winning playwright/screenwriter outlined the challenges he encountered while adapting Doubt—a dialogue-driven work, with a small cast and little action—for the screen (“I sweated over every page.”) He pointed to actors and movies he admires and defined what makes a great drama (“it taps into our fears”) and comedy ("it’s based on savage truth, and if it’s truly funny, the audience is unhinged").

Throughout his residency, Shanley offered inspiration and advice to students exploring writing and directing careers, and he recalled crossroads in his own life, from the writing class that sparked his professional journey to the moment when he learned to tune in “to that low voice of personal truth.”

“When I was starting out, I did not value the truth, my truth. I thought I had to punch it up. It was not until I started going on a different path that I started to have success,” said Shanley, who’s currently working on a comedy, to be staged next fall, as well as a feature film. “When you trust that your life, who you are and what you do is worthy—not what you think you should think and feel—that’s when you can start to tell your own stories, your truth. It’s a beautiful thing.”