The Icing Is Not the Cake 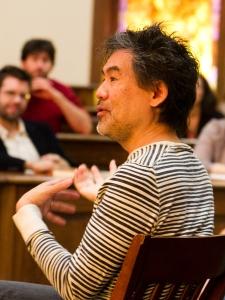 In Denny Hall 317, light comes in through stained-glass windows dull and warm and yellow. It feels like a stage set—the lighting just right, the ambience suggestive of something about to transpire. Fittingly, this is the venue for Visiting Assistant Professor of Theatre & Dance Jon Liebetrau's Introduction to Theatre class. Just as fittingly, acclaimed playwright and 2012 Harold and Ethel L. Stellfox Visiting Scholars and Writers Program honoree David Henry Hwang is sitting at the front of the room, his busy day about to get under way.

Hwang is the author of many plays and other works, perhaps most notably M. Butterfly, a finalist for the 1989 Pulitzer Prize and winner of the 1988 Tony, Drama Desk, John Gassner and Outer Critics Circle awards. He has been awarded Guggenheim and Rockefeller Foundation fellowships and the PEN/Laura Pels International Foundation Award, which named him a grand master of American drama in 2011. His list of accomplishments stretches on, and the Dickinson community is thrilled to have him for the day.

"Having someone like David Henry Hwang here is a real opportunity for the students to humanize talent," says Associate Professor of Theatre Karen Kirkham, who also serves as the chair for the Department of Theatre & Dance. "They see that successful artists are often the ones who continue to be 'students'—to ask questions and take risks in exploring the answers, in this case through the medium of theatre."

Once Liebetrau introduces Hwang and gives some background on his stunning career, the floor opens up for questions, which Hwang handles with aplomb. His answers go far beyond the questions, in the best possible way, and he shows repeatedly that he knows his audience, stopping to give proper backstory and context, a trait that has helped him reach the top of the drama world.

"Anytime you can bring a professional theatre artist to campus, it's really exciting," says Jeremy Lupowitz '15, "especially for me, because I'm an intended theatre major. It's just awesome that we get someone like this here, right in class, to talk to us about the theatre."

In discussing his work, Hwang is humble and often self-effacing, noting that failure is part of the game and something that can propel a writer to future success. In discussing his 1993 play Face Value, for instance, he says with a laugh, "It wasn't a very good play," mentioning that it closed in previews. But the lesson imparted to his audience, who hangs on every word, only begins there, as Face Value's failure inspired Hwang's Obie Award-winning play Yellow Face (which was also a Pulitzer finalist).

"Writing plays is a really difficult way to make a living," Hwang says at one point, when asked about the business. "Every now and then you might have a hit and make a lot of money, but most of the time you're not going to. But the great thing about that is that it means that people who are writing for the theatre are doing so because they need to say something, and you get to express things that are often hard to say."

Laura Henke, a teaching assistant in the math department, is taking an acting class with Kirkham, and she came to Denny Hall today to find out more about the inner workings of the writer and his world. "I became interested in acting and writing some time ago," she says. "And I was lucky to be able to come and hear about it from such a professional. I got a great picture of how a playwright works."

The process, and Hwang's philosophy behind much of it, is on full display over the course of the hour, and his insight makes for a rich experience. "If I write something for me [as opposed to strictly for commercial purposes], it's more of an exploration," he says. "I'm learning more about myself. And if I have that experience, that's the most important part of doing it. If you write something and it ends up being a success, that's the icing on the cake; it shouldn't be the cake itself. The cake is about creating something for yourself."

Hwang's words and presence will linger long after he leaves campus, and his influence will likely prove invaluable. "Professionally, such a visit deepens my knowledge of the writer and his works, and it inspires my teaching and directing choices as well," says Kirkham. "And hopefully, this will encourage students to pursue their dreams and someday give back, like Miss Stellfox has done through this program."