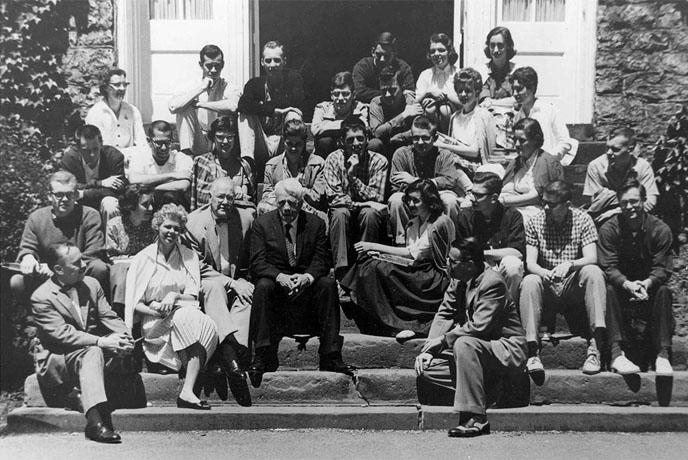 Robert Frost (center) poses on the steps of Old West with Dickinson students. Jean Louise Stellfox '60 was so inspired by poet Robert Frost's 1959 visit to Dickinson that she left more than $1 million to the college. The gift will make it possible each year for a major author to spend a few days on campus.

Maxine Kumin nearly abandoned her dream after a professor's exceptionally harsh critique. "He wrote, 'Say it with flowers, but for god's sake, don't write any more poems,' " Kumin recalled during a public appearance at Dickinson College.

Mortified, she took his advice.

Almost two decades passed before Kumin—by then a housewife and mother of three—enrolled in another poetry class. This time, however, she was armed with mature insight and sensibility. And it shone in her work. Now a major figure in American poetry, Kumin has published more than a dozen acclaimed poetry collections, including the Pulitzer Prize-winning Up Country: Poems of New England (1972).

Many other prestigious awards and publications later, Kumin is the recipient of the 2009 Harold and Ethel L. Stellfox Visiting Scholars and Writers Program award. She accepted the award during a two-day stay at Dickinson College.

In a question-and-answer session in Rubendall Recital Hall, Kumin spoke openly about her struggles with literary criticism, her friendship with Anne Sexton, her view of poetic forms and the challenges faced by American female poets in the 1950s and 60s. When asked if writers should get permission before writing about people they know, Kumin displayed the late-blooming moxie that has driven her later-life success. “Art is not life. Art is one step beyond,” she asserted. “Damn the torpedoes! Full steam ahead!”