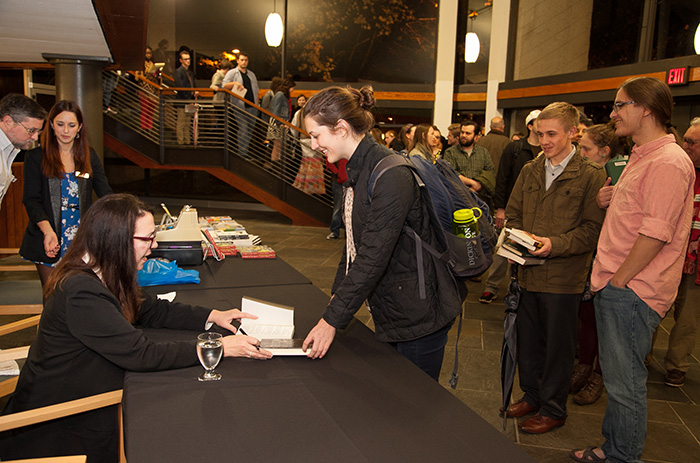 A newly divorced man tries to date again—but is unable to remove his wedding ring. A divorced woman and her teenage daughter attend a wedding together; the bride’s first husband is both the entertainment and the best man. A single woman drops a baby at a barbecue and ends up hastily married. A woman bides her time, memorably, in a cheese shop in a Midwestern mall. These are the offbeat-yet-familiar scenarios in Lorrie Moore’s fictional worlds. With fine-tuned powers of social observation, she draws readers in to deeply human conundrums, to hilarious and heart-breaking effect.

“People who read Lorrie Moore tend to go through the rest of their lives imprinted by the stories,” said Adrienne Su, poet-in-residence and associate professor of English, who helped bring the acclaimed writer to Dickinson this year. As recipient of the 2014 Stellfox Award, the celebrated writer visited campus this week for a residency including a public reading, book signing and award ceremony; a question-and-answer session; classroom visits and workshops; and small-group gatherings with students and professors.

“It’s inspiring to be able to talk with such an acclaimed and prolific writer,” said sophomore Michelle Hoffer, who was introduced to Moore’s writing during a creative-writing course this fall. “It gives you a different perspective on writing.” 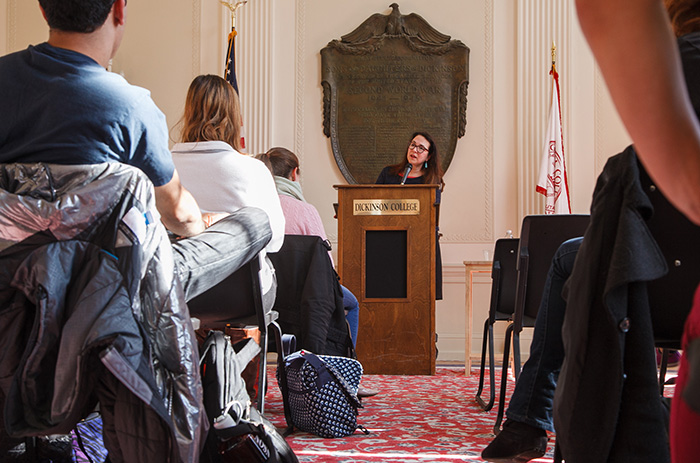 Stellfox Award-winner Lorrie Moore speaks with students in a Craft of Fiction class in Memorial Hall. Photo by Carl Socolow '77.

Established by the estate of Jean Louise Stellfox ’60 in 2003, the Harold and Ethel L. Stellfox Visiting Scholars and Writers Program brings an accomplished literary figure to campus each year. Jean, an English teacher, had been inspired by her interaction with poet Robert Frost when she was a Dickinson junior, and she left most of her estate to her alma mater in hopes of instilling a love of literature in new generations of Dickinsonians. The program is named in honor of her parents; past recipients include playwrights Albert Albee and David Henry Hwang; poets Paul Muldoon, Maxine Kumin and Rita Dove; and authors Richard Russo, Margaret Atwood, Mario Vargas Llosa and Ian McEwan.

Taking the podium in the Anita Tuvin Schlechter auditorium Thursday night, Moore opened a copy of her newest book, Bark, and glanced over the top of her glasses at the audience of students, professors and community members. “I’m honored to be a part of this series,” she told them. “So the story I’m going to read tonight is ‘Thank You for Having Me.’ Because that’s how I feel.”

The gratitude was mutual, President Nancy A. Roseman added. “Through your residency at Dickinson College you renew the formal and informal interactions that Jean Stellfox enjoyed many years ago,” she told Moore. “I’m quite sure Jean would be pleased.” 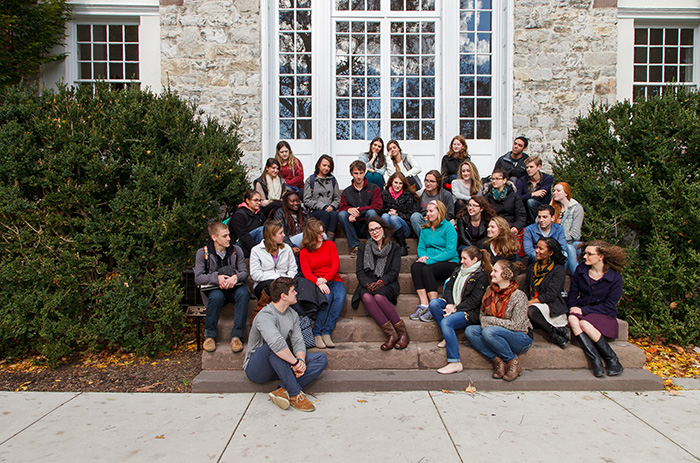 Staged on the steps of Old West, this photo is an homage to a picture of students with poet Robert Frost in 1969. Frost's visit inspired Jean Louise Stellfox '60 to pursue teaching and to establish a residency program to bring major literary figures to campus. Photo by Carl Socolow '77.