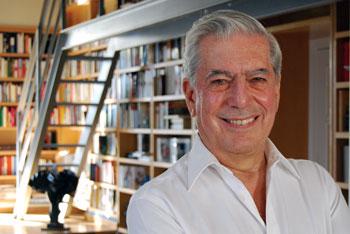 He is a novelist, playwright, essayist, journalist and literary critic whose work has been translated into more than 30 languages. He also is a former leftist supporter of Fidel Castro who later revered Margaret Thatcher as his political idol and ran for president of Peru as a center-right candidate.

His career has traversed investigative journalism in his native Peru to essays on Madame Bovary and has spanned decades, from The Time of the Hero (1963) and Conversation in the Cathedral (1969) to Aunt Julia and the Scriptwriter (1977), The Storyteller (1987), Death in the Andes (1993) and The Feast of the Goat (2000). His 1997 collection of critical essays, Making Waves, won the National Book Critics Circle Award.

Mario Vargas Llosa, the 2008 recipient of The Harold and Ethel L. Stellfox Visiting Scholars and Writers Program award, will visit Dickinson Dec. 3-4 to discuss his life, writing and, perhaps, politics.
A global career

Vargas Llosa's literary awards are as cosmopolitan as his writing and include the Spanish Critics Award (1966), the Peruvian National Prize (1967), the Ritz Paris Hemingway Award (1985), the Miguel de Cervantes Prize (1994) and the PEN/Nabokov Award (2002). He also is a member of the Spanish Royal Academy.

Although a controversial figure because of his political views, Vargas Llosa has maintained a strong international audience for his fiction, balancing both worlds with finesse. In a recent interview with The Guardian, he explained that "literature is my vocation, but I've never liked the idea of being closed off in a world of fantasies. I like having one foot in the street."

"He's been a writer for so long, and his audience remains faithful," remarked Jorge Sagastume, associate professor of Spanish and chair of the Stellfox committee. "I don't think his political views have had much effect on how his readers perceive him or his fiction."

Vargas Llosa, whose work was deeply influenced by his early stint as a newspaper cub reporter, continues to write about timely matters, from the war in Iraq to the Russian invasion of Georgia. He contributes a regular column to Spain's national daily newspaper, El País, and recently traveled to the Congo to do research on a novel based on the life of Roger Casement, a British consul turned Irish nationalist.
A Stellfox first

Sagastume met Vargas Llosa years ago when Sagastume was a graduate student at Vanderbilt University and was especially pleased that the Stellfox committee chose a Spanish-language writer as this year's recipient.

"He's been a major influence on world literature," he said. "We want to put students in touch with great literary figures, regardless of where they're from."

Vargas Llosa's visit is funded by the Harold and Ethel L. Stellfox Visiting Scholars and Writers Program, endowed by their daughter, Jean Louise Stellfox '60. Stellfox was inspired to become an English teacher after meeting Robert Frost when he visited Dickinson in 1959, and when she died suddenly in 2003, her estate provided $1.5 million to the college to continue her mission of inspiring students through literature.

The program makes it possible each year for a major writer to spend time on campus, hold readings and meet students through workshops and discussions. Previous awardees are novelist Ian McEwan, poet Rita Dove and playwright Edward Albee.

—Rachel Warren '09 contributed to this story