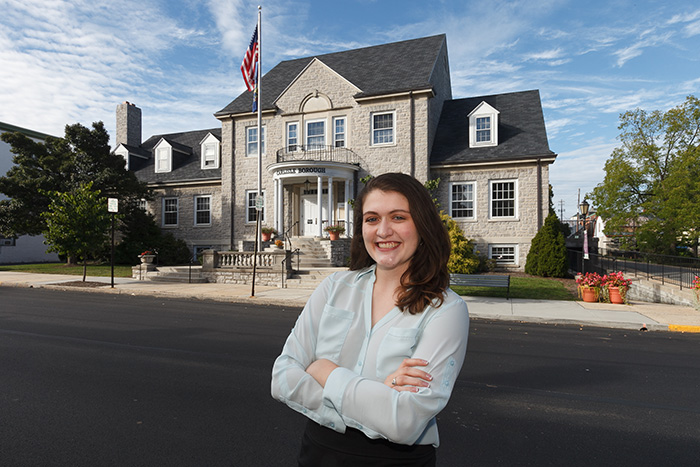 There’s symbiosis between Dickinson and its Revolutionary War-era hometown, and it’s been there from the start. The college was founded just a few blocks from the town square and courthouse, and in its early days, students often walked there to take in local events and see the U.S. justice system in action. Town residents likewise benefitted from college programs and events.

That partnership still flourishes, as Dickinsonians join in local happenings, take advantage of the area’s natural resources, present performances in downtown venues, volunteer at local organizations and host free, public events. But there remain fundamental misunderstandings on both sides of the town-gown divide, says Jackie Joyce ’19.

One year after writing a research paper on the issue, Joyce is helping to further fortify this centuries-old relationship by serving as student representative on the Carlisle Borough Council.

A one-year, non-voting appointment, the Dickinson College Student Ambassador to Borough Council position was created in 2002 to help strengthen the relationship between Carlisle and Dickinson and connect civic-minded students with the local community. Chosen by Dickinson to represent the college, the student-ambassador presents college updates during monthly council meetings and brings back news of community events and initiatives. He or she also may design and implement a related project, such as a survey or community-outreach event.

“It’s an important piece in our college-community relationship, because it allows local officials to see and hear what’s’ happening on campus on a monthly basis, and from a student’s perspective,” says Ashley Perzyna, assistant chief of staff, who meets with the student-ambassador prior to each council meeting. “The council is very eager to get students involved, and the student gets a behind-the-curtain look at how municipal government is run.”

A Mechanicsburg, Pa., resident, tour guide and Student Senate member who serves on the college’s Academic Program and Standards Committee, Joyce was introduced to the Carlisle community during Pre-Orientation, when her First-Year Interest Group volunteered for an afternoon at a local nonprofit. Her interest in the local community deepened during her first-year seminar, led by Brenda Bretz, senior associate provost for academic affairs.

Bretz, a first-generation college student, invited the students to examine the ways that socioeconomic differences manifest in higher education at large and at Dickinson. For her final paper, Joyce decided to look at the campus and surrounding community through that lens. After reading in Dickinson Today that Carlisle citizens and leaders would be meeting in Allison Hall for a June debate on a proposed nondiscrimination ordinance, Joyce knew she’d found a perfect research opportunity.

“It was all so interesting to see the issue being discussed, and it helped solidify my interests,” says Joyce, who came to Dickinson with intent to declare an economics major, but has since set her sights on a double major in sociology and Spanish, and also is interested in policy studies. While at the debate, she met several administrators, including Perzyna, and briefly discussed her research with them. That discussion ultimately led the assistant chief of staff to hand pick Joyce for the ambassadorship.

During her first council meeting, Joyce informed fellow council members of upcoming public events at Dickinson and updated them on the college’s ongoing presidential search. When she got back to campus, she briefed fellow Student Senate members on local events of interest, including an upcoming First Friday celebration in downtown Carlisle.