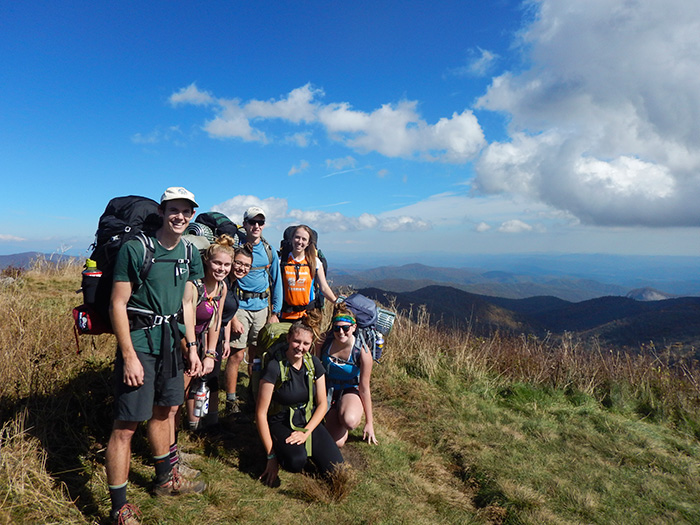 Most Dickinsonians can tell you that the college is nestled in prime territory for American-history buffs. But did you know that the region also is a hotspot for hiking and rock-climbing, kayaking, camping, caving, fishing and other al fresco activities? Just ask the members of Dickinson’s Outing Club, an award-winning student organization that has seen significant growth within the past year.

Named the Student Group of the Year at Dickinson’s 2014 Leadership Recognition Ceremony, the Outing Club organizes a variety of rugged adventures throughout the academic year and offers training and equipment to participants. The group boasted more than 100 active members during the 2013-14 academic year, and since the start of the fall semester, it has organized 32 outings. These include a local hike for students and their parents, an on-campus rock-climbing contest and several off-campus climbing trips, seasonal apple-picking, biking, camping, hiking and caving trips, two fall-pause excursions, a group-yoga session, a ropes course and a skill-building workshop.

And the students don't have to travel far to have fun. Dickinson is seated in the Cumberland Valley region, home to world-class trout streams, spectacular mountain views, state parks and abundant walking and hiking venues. That includes a 13-mile stretch of the Appalachian Trail, a famed hiking path that extends from Georgia to Maine and attracts approximately 2 million visitors each year.

The Appalachian Trail's halfway point is located in Boiling Springs, Pa., a short drive from campus. (Fittingly, the only hiking museum in the nation is located in the nearby Pine Grove Furnace State Park.) Waggoner’s Gap, a must-see for wildlife enthusiasts, is also just minutes away. Approximately 15,000 to 20,000 raptors pass through this 125-acre hawk-watching rock outcrop each year, along with many golden eagles and hawks, and the area’s two hiking trails offer breathtaking, 180-degree views.

Club members plan to make fuller use of these stunning natural attractions in the coming weeks and months by increasing the number of outings it offers, says Mackenze Burkhart ’15, a double major in archaeology and anthropology who enjoys the camaraderie and challenge that Outing Club excursions bring. Club leaders also hope to organize different kinds of excursions, such as skiing.

In the meantime, plans are already underway to schedule spring events, which will include a cabin stay in Michaux State Forest.

“Climbing mountains, setting up campsites late at night or in the rain, and sharing stories, experiences and songs around a campfire cultivate friendships that are genuine and strong,” says Anna McGinn '14, who served as the club’s president in 2013 and now works on campus as the college’s interim coordinator for campus recreation. “These relationships, coupled with the leadership experience gained by guiding peers in the wilderness, create a sense of community and provide a remarkable opportunity to build a skill set that they can use throughout their lives.”