A Banner Year of Giving 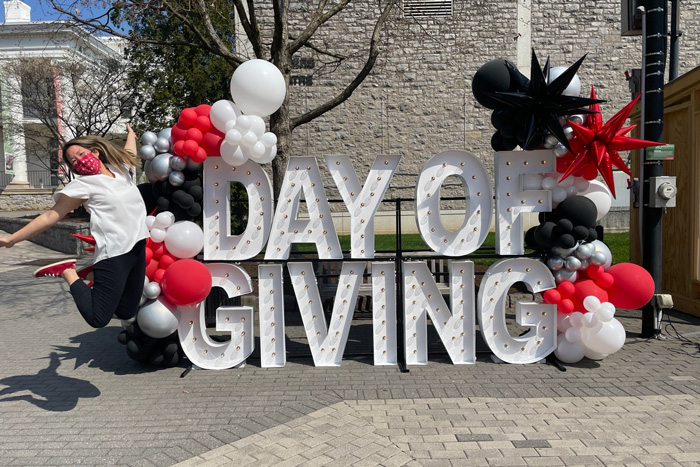 We asked, and you answered: Dickinsonians around the world supported Dickinson in vital and profound ways during the 2020-21 fiscal year.

Each gift helped make possible the programs, initiatives, experiences and scholarships that unlock and enrich our students’ Dickinson educations and help them prepare to contribute meaningfully to the world. Here are a few highlights from Dickinson’s banner year of giving.

By investing in the college and its talented students, donors made an impact that was immediately felt on campus. Their gifts also have far-reaching effects.

More than 1,400 donors contributed a combined $9,925,000 in scholarship gifts that will help provide a Dickinson education for promising students who believe in the power of a liberal-arts education. This helps provide a pathway to success for the next generation of engaged leaders across a spectrum of fields.

Because of generous alumni, parents and friends of the college, Dickinson is innovating and providing students with future-ready skills. An example: $2.8 million in support helped launch Dickinson's new interdisciplinary data-analytics major this fall. Focusing not only on computer science and mathematics but also on philosophy and ethics, this program—which springs from Dickinson’s Revolutionary Challenge—empowers students to bring interdisciplinary, liberal-arts analysis and perspectives to this surging, cross-sector field.

Together, these 6,304 longtime and new supporters raised $23.7 million in total gifts and commitments, including more than $10 million in support of the Dickinson Fund (the college's annual fund). Dickinson parents contributed $1.1 million, and alumni gave $5.3 million in reunion-class giving.

Remarkably, nearly $1.1 million of these gifts were received during a single day last April. Roughly 3,200 alumni, parents, faculty and staff, students and friends of the college joined in Dickinson’s annual Day of Giving in support of every student. And more than 300 Dickinsonians and friends helped make this crucial event a success, logging in a combined 20,000 hours as Day of Giving volunteers.

Giving to and through Dickinson

The college was able to generate this robust support through a personalized approach to philanthropy that includes opportunities to give through Dickinson, as well as to Dickinson. Using this model, donors have supported their own interests, passions and values, by giving toward public-policy and sustainability education, data analytics and quantitative reasoning, diversity and art, global studies and more.

To the alumni, parents, faculty, student, staff and friends of the college whose generosity makes a real difference at Dickinson, and in the lives of all students, and to all those who helped amplify the college's efforts during the past year as volunteers, we thank you. Because of your support, Dickinson is stronger. And we’re working harder than ever to develop the citizen-leaders and creative problem-solvers of tomorrow who will, in turn, be empowered to make a real difference in the world.

To learn more about this banner year of giving and read the stories behind the numbers, read Dickinson’s 2020-21 Report on Giving.