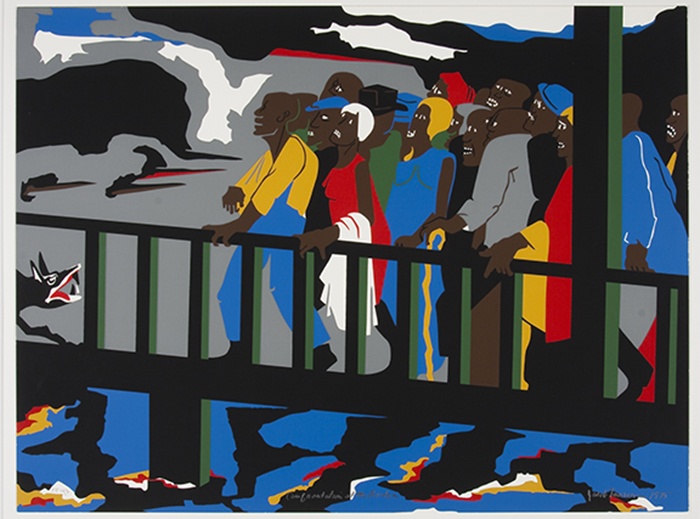 A peek at new acquisitions and the collector who shared them

On March 7, 1965, the late John Lewis led a group of activists in a peaceful march from Selma, Alabama, to the state's capitol, showing support of voting rights for all. On the Edmund Pettus Bridge, reaching from Selma to Montgomery, the protesters encountered local authorities and extremists who used brutal force in an attempt to stop the protest. That day, known as “Bloody Sunday," was a pivotal event in the civil rights movement. Ten years later, African American artist Jacob Lawrence captured the fire and injustice of that watershed day in his print Confrontation at the Bridge.

That work is now a part of The Trout Gallery's permanent collection, along with more than 50 other African American artworks recently gifted to the college. We're taking a peek behind the scenes of this important new acquisition—both at the woman who made it possible and at the important works she shared.

Darlene K. Morris attended high school in suburban Harrisburg, attained B.A. degrees in psychology and sociology at the University of New Mexico and a master’s degree at the University of Chicago, and then worked as a learning-disability consultant and reading specialist. Her late husband, Robert, was a widely respected Civil War scholar who served as director of the Northeastern Branch of the National Archives, and as curator of Special Collections at the Schomburg Center for Research in Black Culture. His study of Black schools in the Reconstruction South was nominated for a Pulitzer Prize in 1981.

The couple enjoyed traveling and visiting museums, and they made regular Sunday-morning visits to the Metropolitan Museum of Art. He collected coins, and, after his death in the early 2000s, she discovered a collecting passion of her own. “I was at the print fair at The Armory in New York City, and I looked at a print by Whistler,” she remembers, “and I was amazed. Just amazed. That was when the art collection started in earnest.” 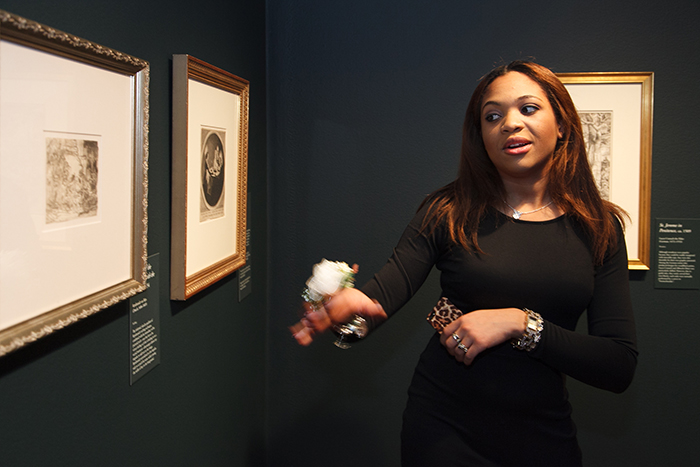 Morris’ art collection now spans centuries and encompasses prints, paintings, drawings, sculpture and antique furniture. It includes works by Benton, Bonnard, Cassatt, Dürer, Matisse, Renoir and Rembrandt, and Whistler, among others. There's a copper plate by Millet and a drawing by Bonheur, two artists who inspired Morris when she was a schoolgirl, and a sizable number of African American works. “I buy these pieces because I like them,” she says. “One day, I started to think, ‘What’s the good of having all of these artworks stored away and not really enjoying them?’”

In 2010, Morris found a way to do just that when she met Trout Gallery Director Phillip Earenfight while taking in a traveling exhibition at The Trout. The following year, The Trout presented some of the works in the Morris collection in an exhibition titled Masterworks from Renaissance and Early Modern Prints and Drawing from Darlene K. Morris. “Walking into the gallery and seeing my works displayed there—I was blown away,” says Morris of the upstairs-gallery exhibition.

Three years later, Morris lent Northern Renaissance and Baroque etchings and engravings to The Trout, and these works formed the basis of a student-curated exhibition. And in 2016, The Trout presented 32 of Morris’ more recent acquisitions of 15th-18th century Italian drawings and prints as the culminating project for that year’s senior art-history seminar.

Morris made her most recent gift during Black History Month. Her intention: to provide a doorway to teach and learn about African American history, experiences, culture and art.

“This gift of important prints by several of the leading artists of the 20th century could not be more timely," says Earenfight. "I am profoundly thankful for Darlene’s generosity and foresight to acquire such vital documents in the art and history—painful as it may be at times—of this country.”

The collection includes four prints by Lawrence (1917-2000), who depicts police on the Edmund Pettus Bridge as a wolf in his vibrant 1975 work; a series of prints by Alla Rohan Crite (1910-2007) illustrating the Book of Revelations; The Black Madonna by Margo Humphrey (b. 1942); and a hand-colored wood engraving depicting the Emancipation.

Art such as this can spark meaningful conversation with and among students—including those who discussed some of the prints as part of an Africana studies class in 2019 and those who drank in that year's Art and Civic Engagement exhibition—and among those in the surrounding community who take part in Trout Gallery outreach programs. One of the new acquisitions, Learning Through Art [After Family Dinner, 1969], addresses these possibilities directly. It is a print of a collage—the medium for which the artist, Romare Bearden (1911-98), is most famous. 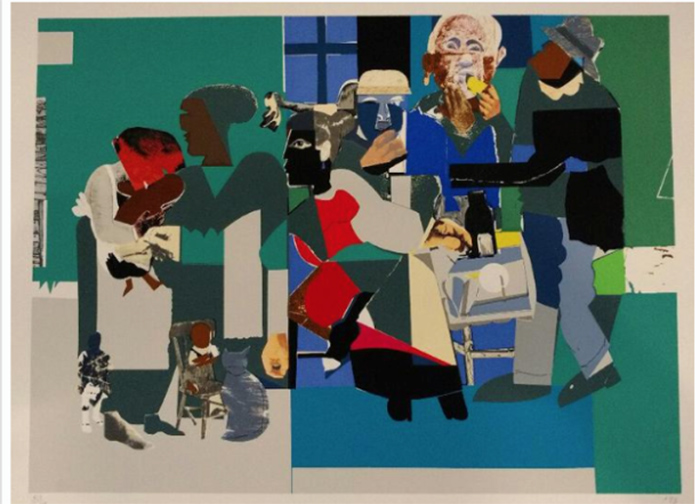 The son of a prominent community leader in Harlem, Bearden was a U.S. Army veteran, trained social worker and one of the preeminent African American artists of the late 20th century who also wrote scholarly articles and essays, including "A History of African-American Artists: From 1792 to the Present," copublished with journalist Harry Henderson in 1993. As Learning Through Art (1993) suggests, he discovered intersections between art and social justice at home, where luminaries such as Langston Hughes and Duke Ellington came to visit regularly. As a young man, he continued to explore that space, becoming involved with the Harlem Artists’ Guild and the 306 studio, where Black artists, writers and musicians often met.

Morris is grateful to have the opportunity to contribute to Dickinson and the local community through artwork such as this, and she’s thankful for the many people who’ve inspired, educated and encouraged her throughout the years, from family members who nurtured her to friends who encouraged her passions to mentors, including Earenfight, who helped her develop a keen collector’s eye. She continues to collect artworks, and she enjoys attending global auctions remotely. Each auction represents an opportunity for this lifelong student to continue to learn about and enjoy art.

“I like knowing that the art I collected will be used in classes and shared with underserved communities,” Morris says, speaking of The Trout’s extensive educational outreach programs for children and youth in the local community. “I want it to be seen and shared.”