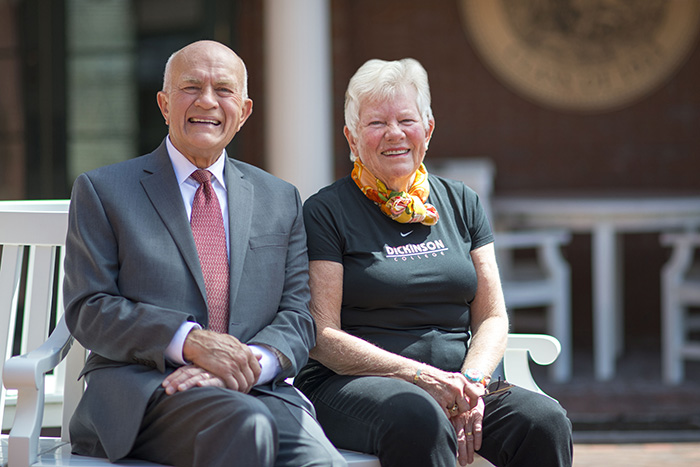 Betty Richardson Churchill ’58 and her husband, Dan, have shared an adventurous life—one distinguished by exciting careers, global living and travel and a shared commitment to service and lifelong learning. Now, they’re helping young people with similar interests to develop the skills, knowledge and mindsets they’ll need to help solve the most pressing global issues of the years and decades ahead.

A day at the beach

Betty was an English major at Dickinson who wrote for The Dickinsonian and played NCAA softball and spent a few weeks abroad one summer with a Dickinson professor and classmates.

“That summer was the first time I’d been to Europe. I loved it, and I stayed in touch with the friends I’ve made through the years,” says Betty, who was determined to keep traveling. She joined the CIA after graduation, and soon embarked on a two-year assignment in West Berlin, at the very height of the Cold War (the Berlin Wall had just been erected in 1961). Among Betty’s responsibilities was meeting and managing support agents who received encrypted messages from behind the Iron Curtain.

Dan was studying engineering physics at the University of Maine when he was recruited by the CIA. After a stint as a junior officer in the U.S. Air Force, he joined the agency as well.

Dan and Betty’s paths crossed soon after Dan joined the CIA and Betty returned from her tour in Berlin. Dan and a friend, another CIA officer who had recently earned a pilot’s license, had flown to the beach in the friend’s recently purchased, canvas-covered two-seater plane, which would soon after fail its inspection. Betty, back in the U.S. after her assignment in Berlin, had also come to the beach with a friend who worked at the CIA. Turns out, the two friends were acquainted. Before he and his friend flew off in the dilapidated plane, Dan got Betty’s number. Their first date was a Herb Alpert concert—Betty was a big fan. “She joked that she would’ve gone to that concert with just about anyone,” Dan says with a laugh. “Luckily, she went with me.”

Dan and Betty married and lived together in Europe for 23 years—15 in London and the rest in Frankfurt and Brussels. They traveled extensively and continued to work in the intelligence community until 1971, when Dan earned an MBA from Boston University and pivoted to international finance.

The Churchills relished the chance to learn about global cultures and cuisines, and Betty nurtured a love of art and antiques. They also developed a passion for sustainability, informed by Dan’s background in science and a shared love of the natural world.

These interests, and their experiences as public servants, living abroad, led them to think deeply about international affairs, the U.S.’s role in the world, and the need to help the brightest and best young people prepare to make a difference as global leaders and public servants. After Dan retired as Avis Europe’s vice president of finance in 1998, the Churchills began to consider ways they could help advance that aim. 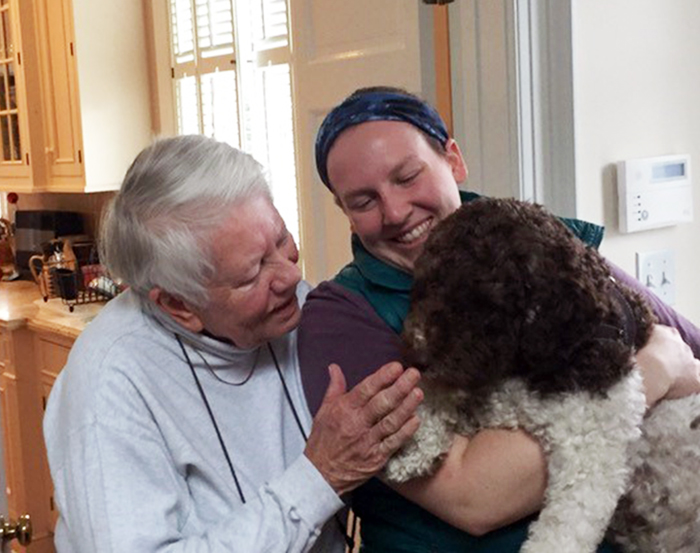 Betty Churchill '58 (left) catches up with Anna McGinn '14 and Anna's dog, Sparrow. McGinn estimates that she visits the Churchills a few times each month.

Betty had kept in touch with Dickinson friends through the years, and had made a point of seeing fellow alumni during trips home to the U.S. After she and Dan moved back to America, she deepened her involvement with her alma mater. They looked for ways to support Dickinson’s current programs and initiatives that aligned with their interests and values—civic engagement, sustainability, global study and engagement, global leadership, international studies and the arts.

They began by offering support for the Clarke Forum for Contemporary Issues, bringing high-profile speakers to campus, and for Dickinson’s intensive, interdisciplinary Mosaic program, which links classroom learning with fieldwork and immersive experiences across the country and around the world.

Dan researched similar opportunities to make a difference at his alma mater. They became founding supporters of a new graduate program in international affairs—the only such program in northern New England (Dickinson’s then president, William G. Durden ’71, served as outside reviewer for the program). And Dickinson developed a graduate linkage program for Dickinson students wishing to earn an M.A. in global policy at the University of Maine’s School for Policy and International Affairs (SPIA). They also began supporting the Climate Change Institute (CCI) at UMaine through funding for students’ field expeditions.

Supported by the Churchills, the graduate-linkage program has brought 10 qualified Dickinson students (and more each year) to UMaine, where they may complete the M.A. in just 15 months. The Richardson-Churchill SPIA Fellowship Fund at the University of Maine provides tuition assistance. The Churchills also support related fieldwork and learning opportunities at both institutions.

“Dan and Betty support students financially in conducting novel research, but also through engagement: They actively want to hear what you discovered in your research and inevitably provide new ideas for further study and improvement,” says Kochtitzky, a doctoral student at the University of Ottawa who conducted Churchill-supported fieldwork in Peru with Professor of Earth Sciences Ben Edwards and presented the research at a premier conference. “This way of giving not only advances our understand of our changing planet, but also propels budding careers.”

“They’re like second grandparents. Even our dogs are friends!” says McGinn, a policy associate at the Environmental and Energy Study Institute who, as a Maine grad student, traveled to Nicaragua and Samoa to conduct fieldwork on climate change adaptation with help from the Churchills’ funding and also traveled to multiple United Nations climate change negotiations—a topic she became interested in through Dickinson’s 2011 global climate change Mosaic—with the Churchills’ support.

“It seems to me that for Dan and Betty, giving back is all about building meaningful relationships that end up giving so much more than just money,” McGinn adds. “I have learned so much from their approach to supporting Dickinson and the University of Maine—mostly in seeing how fulfilling it can be to stay engaged with the schools and create once-in-a-lifetime opportunities.”

‘The most rewarding thing we’ve done’

The key to that fulfillment lies in the Churchill’s engagement with the college, Dan says. Because they met with staff and faculty members and learned about the college’s current values, programs and needs, they were able to learn what was most valuable to the institutions and students and what best aligned with their own interests and values. When they wrote their wills and bequests, they were better able to think through ways to tailor their philanthropy so they give in a way that’s both impactful and personally meaningful.

Bonus: They’re able to meet young people like Kochtitzky and McGinn, who share their broad values and are working to create positive change.

“Dickinson is a wonderful school—it’s focusing on the right things—and the Dickinson students we’ve met have wonderful values. They’re devoting themselves to areas that really make a difference,” Dan says. “Being able to support that work and connect it to work at the University of Maine is probably the most rewarding thing we’ve ever done.”