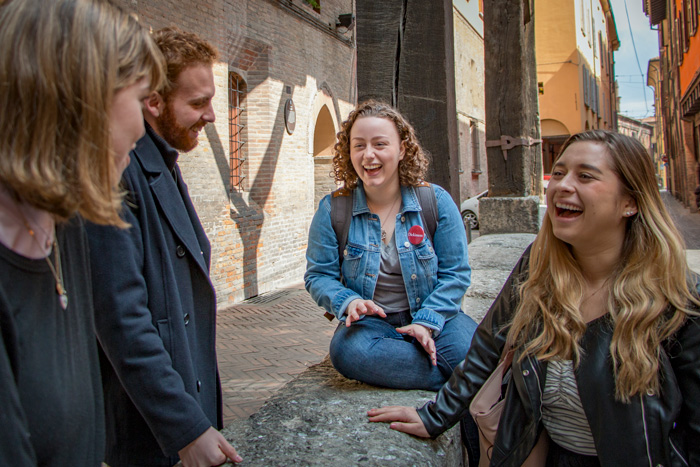 Seattle native Abby Duell ’20 has dreamed of singing onstage since she was a child. As a music-performance major at Dickinson, she enjoys the individualized support and high-level instruction she receives on a small campus that’s a just few hours’ drive from international arts mecca New York City. And in between classes, lessons, practices and performances, she also finds time to get involved in Dickinson’s theatre department, work in the Office of Residence Life & Housing, enjoy the great outdoors and study advanced Italian—a big plus for an aspiring opera singer.

She even realized a lifelong dream when she got involved in Italian opera performances last year as a study-abroad student in Bologna, Italy, where she took most of her classes in Italian. Below, she discusses those experiences and more, including her little-known hobby, her fascination with tiny houses, the book she gives to friends and how she decided to concentrate on music, rather than theatre.

John Montgomery Scholarship on the Recommendation of the Music Faculty.

The Night Circus by Erin Morgenstern. It’s one of those books I’ve bought for friends because I love it so much.

10 Things I Hate About You. It’s based on a Shakespeare play, and it’s filmed mostly in my hometown, Seattle.

I came into college knowing that I wanted to be involved in music, closely followed by theatre. In my first semester, I got my feet wet in both departments by acting in the theatre department’s production of The Three Sisters by Anton Chekhov, singing in the college choir and taking voice lessons. I came back after winter break my first year and immediately declared music as my major. I knew it was what I wanted because I wanted the structure the major offered.

I chose to minor in Italian because I love languages, and I knew that the ability to speak Italian would help me in my musical studies and beyond. I also really like the energy of the Italian department and the support the professors give each of their students. Both the music and Italian departments felt like places where I could grow and learn. So far, I’ve been right!

My senior seminar. The work we did was so individualized: I got to research something that I was genuinely interested in while being supported intellectually (and emotionally!) by my peers and professor. It was really validating and fulfilling!

Banana cake (though I usually remove the frosting!).

I wanted to end up on the East Coast, even though that is far from home so I could be close to musical opportunities in New York, Philadelphia and Boston. I also have family in Massachusetts and New York.

I chose Dickinson because it allows me to pursue music at a high level while also exploring my love of the outdoors and the environment. Dickinson is also small enough that I am not overwhelmed by the size of the campus or the student body.

The costume shop in Montgomery. I do my work study there.

I studied abroad in Bologna, Italy, where I took the majority of my classes in Italian. One highlight for me was attending a brief Italian opera seminar, led by Professor of Music Robert Pound, at the Dickinson Center in Bologna. We then had the opportunity to attend a performance of La Traviata, an opera by Italian composer Giuseppe Verdi. I loved this experience because it felt like I was sharing the art I love with my peers.

… an opera singer. My life goal has not budged one inch since I was 4. I’m not sure if that makes me driven or stubborn!

I plan to apply to grad school for a master’s in music. I’d like to make my living as a singer. Before grad school, I am considering taking a year away from academia. I think it is important to allow yourself breaks, especially between big life changes. During that time I’d like to work, travel and spend time working toward non-academic goals. I’m excited to get started on what’s next!

I knit. My mom taught me when I was little and I hated it, but now it’s something I really enjoy. I do it mostly for myself to de-stress; it’s nice to have a project to work on that’s not for a class. Last fall I knit myself a six-foot-long scarf. (That’s taller than me!) I joke that I would have thrived in Benjamin Rush’s day because I also crochet, sew and cross-stitch.

… my dad’s sister, Melinda, and mom’s cousin Fred. Both died when I was really young. I wish I could have gotten to know them better, especially because they meant so much to my parents. I don’t really believe in guardian angels, but if there is anyone looking out for me from beyond the grave, I’d believe it could be them.

I love tiny houses. I have wanted to build one since I was 13.

Ask for help. And ask for help early. If you knew how to do everything you wouldn’t need college.