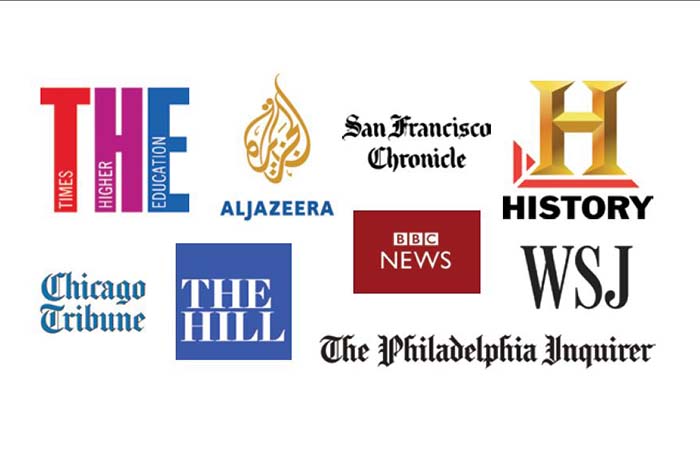 Professor of International Business & Management Steve Erfle and Amelia Dietrich (Forum on Education Abroad) published “College Student Mortality on U.S. Campuses Compared With Rates While Abroad” in Journal of American College Health. Erfle also published “A Geometric Approach to Multicollinearity” in Journal of Economic Education and “An ActiveLearning Approach to Visualizing Multivariate Functions Using Balloons” and “On the Geometry of Linking Production to Cost: The Case for Cobb-Douglas,” both in Spreadsheets in Education.

Visiting International Scholar in International Studies Jacob Udo-Udo Jacob’s op-ed “Once Captives of Boko Haram, These Students Are Finding New Meaning in Their Lives in Pennsylvania” was published in The Conversation and republished under Creative Commons by PhillyVoice, San Francisco Chronicle and WESA.

Associate Professor of Psychology Sharon Kingston co-authored an op-ed on misconceptions of marijuana that was published in The Hill.

Associate Professor of Sociology Helene Lee’s book, Between Foreign and Family, was the 2019 recipient of the Asian American Award by the American Sociological Association.

Associate Professor of Sociology Erik Love was quoted in the Al Jazeera story “Muslim Caucus to Hold First Conference Amid Trump’s Attacks,” which was written by Martin de Bourmont ’14.

Associate Professor of Political Science Sarah Niebler was quoted in two stories for the Philadelphia Inquirer. One story chronicled the evolution of Netroots Nation. The other focused on the questionable usefulness of polling data this far out from the presidential election.

Associate Professor of Political Science David O’Connell was quoted in the Philadelphia Inquirer story “Kamala Harris Was Ready for Her Debate Moment. Joe Biden Wasn’t—and It Could Leave a Lasting Mark.” O’Connell also was interviewed by CBS21 for a report on Pennsylvania’s upcoming role in the presidential election.

Professor of History and John B. Parsons Chair in the Liberal Arts and Sciences Karl Qualls was interviewed by the History Channel for a story about key provisions in the Treaty of Versailles. Qualls also published an op-ed, “We Have to Challenge Injustice and Hatred When We See It, or Risk a Slow Slide Into Genocide,” in the Pennsylvania Capital-Star.

Associate Professor of Political Science Toby Reiner was quoted in the Christian Science Monitor story “For These Young Socialists, It’s All About Local Control.”

Charles A. Dana Professor of Sociology Susan Rose ’77 was interviewed by FOX43 and CBS21 before the third disinterment of Native American children—former students of the Carlisle Indian School—who were buried at the Carlisle Barracks.

Associate Professor of Philosophy Crispin Sartwell’s op-ed “The Opposite Flaws of Trump and Mueller” was published in The Wall Street Journal.

Associate Professor of Economics Tony Underwood co-authored the op-ed “A Carbon Dividend Is Better Than a Carbon Tax,” which was published in Project Syndicate and republished by the Pittsburgh Post-Gazette and the Denver Post.

Vice President for Enrollment Management Catherine McDonald Davenport ’87 was quoted in an Inside Higher Ed story on test-optional policies for international students.

Associate Vice President for Sustainability & Facilities Planning Ken Shultes ’89 was selected as a judge for the 2019 Sustainability Awards. News of the judging panel’s appointment was published in the Houston Chronicle and more than 30 additional print and television websites.

The Archives & Special Collections team received the 2019 Society of American Archivists’ Philip M. Hamer and Elizabeth Hamer Kegan Award for the Carlisle Indian School Digital Resource Center. The award is for creating public awareness of a specific body of documents through compilation, transcription, exhibition or public presentation of archives or manuscript materials for educational, instructional or other public purpose.

The Center for Civic Learning & Action and Executive Director Gary Kirk were featured in The Sentinel article “Where It Stands: Dickinson College Center Connects Students to Carlisle Community.”

The Waidner-Spahr Library’s online information literacy tutorial “Evaluating Sources” was designated by the American Library Association for inclusion in the highly selective PRIMO Database, which publicizes high-quality resources that can help librarians respond to the educational challenges posed by digital technologies. This tutorial was written and developed by Friends of the Library intern Rachel Suppok ’16.