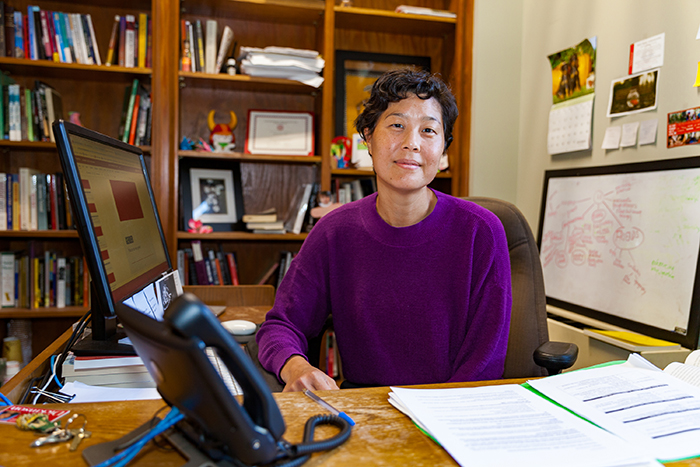 A national nonprofit organization recently bestowed a prestigious award on Professor of Sociology Helene Lee, in recognition of her book about migration, transnationalism and identity. Between Foreign and Family: Return Migration and Identity Construction among Korean Americans and Korean Chinese (Rutgers University Press, 2018) was named an Asia and Asian American Book Award-winner by the American Sociological Association (ASA), which recognizes outstanding scholarship, teaching, practice and public understanding of sociology.

Lee—who joined Dickinson’s sociology department in 2008 after earning her B.A. in psychology at Cornell University (1997) and her M.A. (2003) and Ph.D. (2009) at University of California, Santa Barbara—contends that ethnic identity construction is a complex process informed by the ethnicity, nationality, citizenship, gender and history. Between Foreign and Family focuses on Korean Americans and Korean Chinese who migrate back to their ancestral homeland of South Korea and the sense of transnationalism that shapes these return migrants’ relationships with employers, coworkers, friends, family and the South Korean state.

“It is such an honor to receive this recognition as a researcher and writer,” says Lee, who conducted interviews with 31 Korean Americans and 33 Korean Chinese while researching the book. “It validates the importance of the stories of all the generous individuals who shared their time and experiences with me.”

“The ASA’s book award is a very prestigious award, given to only one book each year, from among all those books in the field published in the preceding two years,” says Erik Love, associate professor of sociology and chair of the sociology department, noting that the last sociology professor at Dickinson to be so honored was Amy Steinbugler in 2014. “It recognizes the excellent research and teaching happening in our department.”