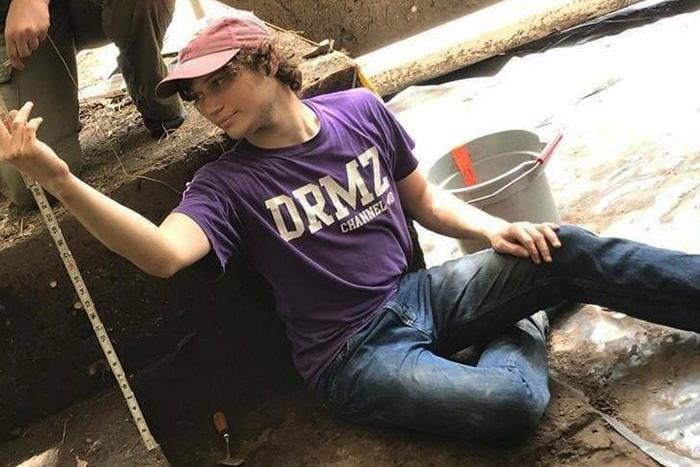 History and archaeology double major Justin Burkett ’20 always knew he wanted to major in history, but his Dickinson experience allowed him to pursue his varied interests of writing, music and theatre. A self-published author, he has embraced his liberal-arts experience not only in the classroom but also on the stage as a member of the Mermaid Players, the Dickinson Jazz Ensemble and Run With It!, Dickinson’s improv comedy troupe.

The Music House (my current home).

I came into Dickinson knowing I wanted to major in history (and a big thanks to Professor of History and Pohanka Chair in American Civil War History Matthew Pinsker for convincing me that I would be better off studying here than at Gettysburg). However, originally, I was considering an English or theatre arts major. When it came to theatre arts, I settled on a minor because that way I could avoid taking dance courses. My archaeology major, I stumbled upon almost by accident. I took two classes in the major the fall of my first year by chance and enjoyed them so much I stayed in the department.

Although I have enjoyed all my classes at Dickinson, I think the best one for me so far was my First-Year Seminar with Professor of Creative Writing and Writer-in-Residence Susan Perabo, “Reading and Writing Short Stories.” Because I wanted to go into somewhat less than creative majors, I enjoyed the chance to work my creative side. The class also reaffirmed for me early on in my college career that I had made the right choice in Dickinson.

I think my choice would be Chuck Berry, who I consider the real king of rock and roll. The style of music he mastered is my favorite to play on guitar, and he always seemed like a nice, friendly guy despite his fame.

I think my favorite would have to be Associate Professor of Anthropology and Archaeology Maria Bruno. It was her teaching style and friendly nature that helped me decide I wanted to be an archaeology major. She has been a great advisor (and helped me get my first shot at field experience). She has a passion for her work that I think everyone needs, and I have met few professors or teachers who care about their students as much as she does.

I do a lot of fiction writing on the side. In fact, I have a book that I self-published on Amazon.

I think my proudest accomplishment at Dickinson so far would have to be my sophomore year involvement with the Mermaid Players. In the fall, I was cast as Tom Joad, the main character of Steinbeck’s The Grapes of Wrath, which was performed on the College Farm. In the spring, I landed a leading role as Vince in the show Buried Child.

Last summer, I worked with the Smith Creek Archaeological Project, down in Woodville, Miss. This project was through the University of Pennsylvania, under Professor Megan Kassabaum of that institution. I helped this project for a number of reasons: I need field experience for the archaeology major; I had never seen New Orleans or the Mississippi River, which we visited; I love Civil War history, and there are numerous sites in Mississippi; and I do not mind the heat of a Southern summer. We worked on a mound site built and lived on by ancestors of the Natchez. We found a ton of artifacts down there (over 1,000 bags worth), including projectile points, axe heads, pot sherds and the remains of a large circular structure. I learned several things about myself and the field of archaeology while I was in Mississippi, but the most important was this: Everyone in Mississippi is interested in archaeology. Even regular homeowners treated us like rock stars, and that gave me a new appreciation for what archaeologists do.

I have learned that writing more does not mean you know more (thanks to Associate Professor of History Christopher Bilodeau). I tend to write far too much for papers. I have since learned that a paper written within the page or word limit can be just as effective and intelligent (and take less time and stress to create).