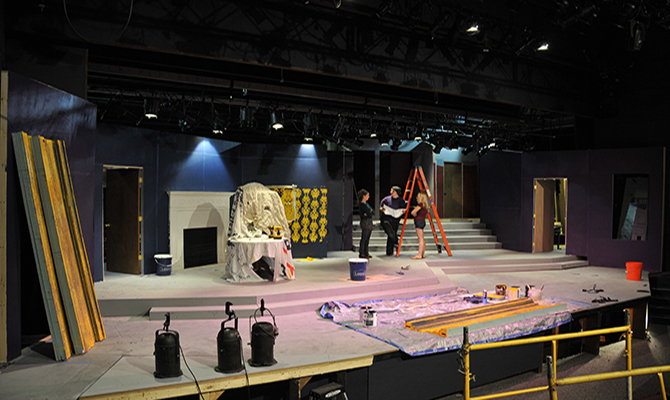 Emily Keaton, Michael Galamba and Pamela Lohmuller working on the set of A Flea in Her Ear.

All information regarding production opportunities, auditions, field trips, and any other departmental activities are first posted on our Callboard, which is located immediately to the right of our boxoffice near Mathers Theatre in the Holland Union Building. People involved in the theatre traditionally check the callboard each day. While we often publicize things using e-mail and the web, the callboard is still the central gathering place for people and information.

There are available technical positions in costume, scene shop (backstage) and box office for each performance. It is a good way to get involved in the production if not cast. The costume shop offers positions such as Wardrobe Manager, Hair and Makeup Supervisor and Dresser(s). The scene shop offers Stage Manager, Asst. Stage Manager, House Manager, Asst. Lighting Designer and Deck Crew. Box Office Manager, Ushers and Ticket Sellers are available through the box office.

A program of one-act plays presented each fall by student directors with first-year students in the casts.

The student dancers of Dickinson's Dance Theatre Group (DTG) have regular opportunities to share the stage and perform the choreography of visiting professional dance companies such as the Trisha Brown Dance Company, the Paul Taylor Dance Company, Headlong Dance Theater and Urban Bush Woman to name a few. In the Spring, students perform their own choreography in the annual DTG Spring dance concert. Combining the rich interdisciplinary nature of their liberal arts education with studio practice, students are encourage to create choreography that is engaging, inquisitive and passionate.

Dickinson College is also a member of the American College Dance Festival Association. Each year, members of our Dance Theatre group travel off-campus for four days of master classes and performances at the regional American College Dance Festival. Students have performed at these festivals in both the adjudicated and informal concert formats. We have attended ACDFA festivals hosted by Virginia Commonwealth University, the University of Kentucky, Cornell University, North Carolina State University, and Pennsylvania State University.

The Mermaid Players--named for a campus landmark--is one of the two co-curricular student organizations the Department of Theatre and Dance supports. It is an organization rich with heritage and tradition. Entirely student run, it supports dramatic programs on campus. Membership, which is outlined in the Mermaid Players Constitution, is not mandatory for a role in department productions. In fact, you will find everyone from pre-med majors to varsity athletes to ROTC candidates working on any given show. We also produce our own series of plays, the Lab Shows are typically produced and performed solely by Mermaid Players. This gives the Mermaid Players a chance to work in a different production position, write their own plays, or act in new and different roles.

The Mermaid Players hold three general meetings a year, as well as meeting every Friday for "Green Room" lunches, to discusss matters of concern. In addition, the Players hold several functions a year, including the Valentine's Day "Love Fest", scavenger hunts, and the annual costumed Mermaid Players banquet. It is at this banquet that new Mermaid Players are inducted and the graduating seniors are given a touching (and sometimes hilarious) send-off.